The Porsche Museum celebrates 25 Years of the Boxster with a special show presented digitally.

Museums look after treasures and contribute greatly to cultural and social life. The Porsche Museum does not just present historical communication looking backward. It transports the values of the brand authentically and vividly into the present and future. To mark the 44th International Museum Day, the Porsche Museum is issuing an invitation to make a digital visit to the museum as from 16 May 2021. In line with this year’s motto “Museums inspire the future”, all interested people can take a virtual guided tour through the special exhibition “25 Years of the Boxster” in German and English starting Sunday, May 16th. In this way, the history of the mid-engine sports car and its importance for the brand will be transported into living rooms all over the world.

“Changed times demand a new way of thinking. We already used digital technology and showing the origins and experience of Porsche in automotive engineering through modern channels for a long time,” says Achim Stejskal, Director Heritage and Porsche Museum. He and his team have committed themselves to the “Mission Future Heritage” in the coming years. Here, they will also present the origins and future of the brand outside the museum.

Digital versatility is important to proactively transport the historical work performed at Porscheplatz in Zuffenhausen out into the world. The online guided tour can be accessed on the museum website at www.porsche.com/Museum as from International Museum Day. All Boxster models, ancestors, and family members that can be seen in the special exhibition to mark the 25th anniversary of the roadster will be presented in two- to three-minute videos. Viewers can navigate through the guided tour themselves and can select which car they would like to see next from a choice of two vehicles in each case.

The digital guided tour brings the history from a quarter of a century of the Porsche Boxster closer to all those interested. There is also plenty of information about cars featuring mid-engine technology, which was used back in 1948 in the Porsche 356 “No. 1” Roadster – the first car to be built under the Porsche name. One of the highlights is the Boxster concept car from Detroit, which served as a basis for the first production generation in 1996 and was, therefore, the starting point for the car’s global success.

Viewers are also given insights into the legendary Porsche 550 Spyder. The ancestor of the Boxster with its lightweight of around 550 kilograms was the first vehicle designed by Porsche for motorsport and the first car with the rev counter positioned in the middle – the start of a tradition that has been continued up to the present day. The mid-engine concept is demonstrated on this example by a look under the rear lid.

Ancestors of the mid-engine technoclogy

In addition, starting on May 16, the Porsche Museum will be showing the 984, a small and lightweight prototype that marked the direction of Porsche’s roadster concept. One of its special features is the engine installed underneath the floor panel, what is known as an underfloor engine. Another exhibit is the Porsche 914/4 from 1975, one of the most-produced two-seater cars with almost 120,000 units built.

The Porsche Museum will show the new development of the water-cooled boxer engine using a cross-sectional model of the 986 Boxster S. A further special guest is the  Porsche Boxster Bergspyder, a one-seater sports car based on the third generation with the internal designation 981. This vehicle enjoys prototype status up to the present day and evokes the Porsche 909 Bergspyder from 1968, with 384 kilograms the lightest racing car ever built by Porsche. To mark the anniversary, Porsche launched the “Boxster 25 Years” edition as a homage to the concept car from 1993 at the beginning of this year. This is limited to 1,250 units worldwide and can also be seen on International Museum Day. 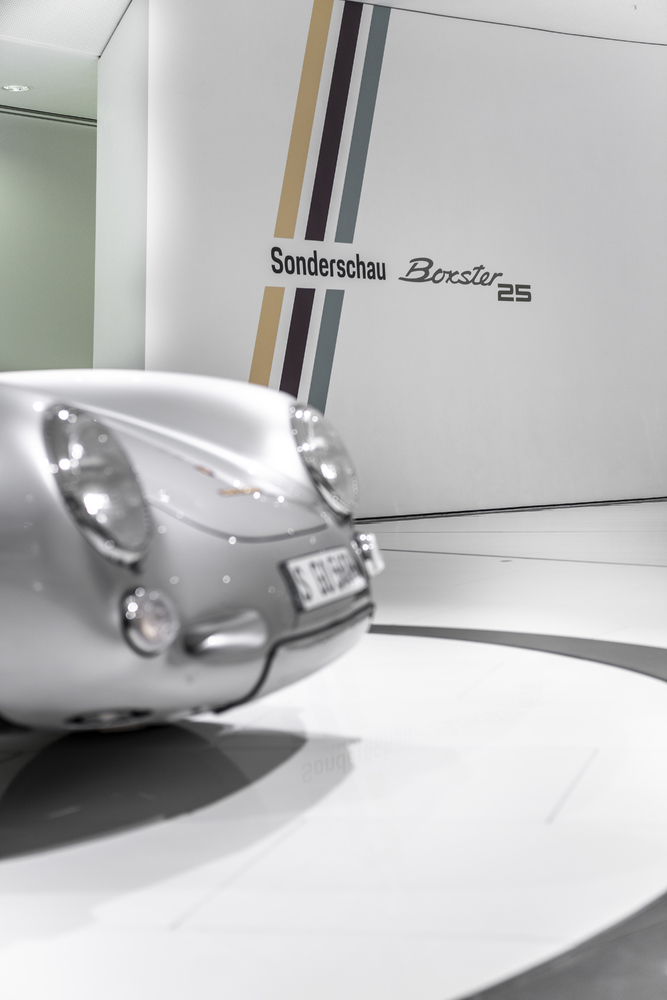 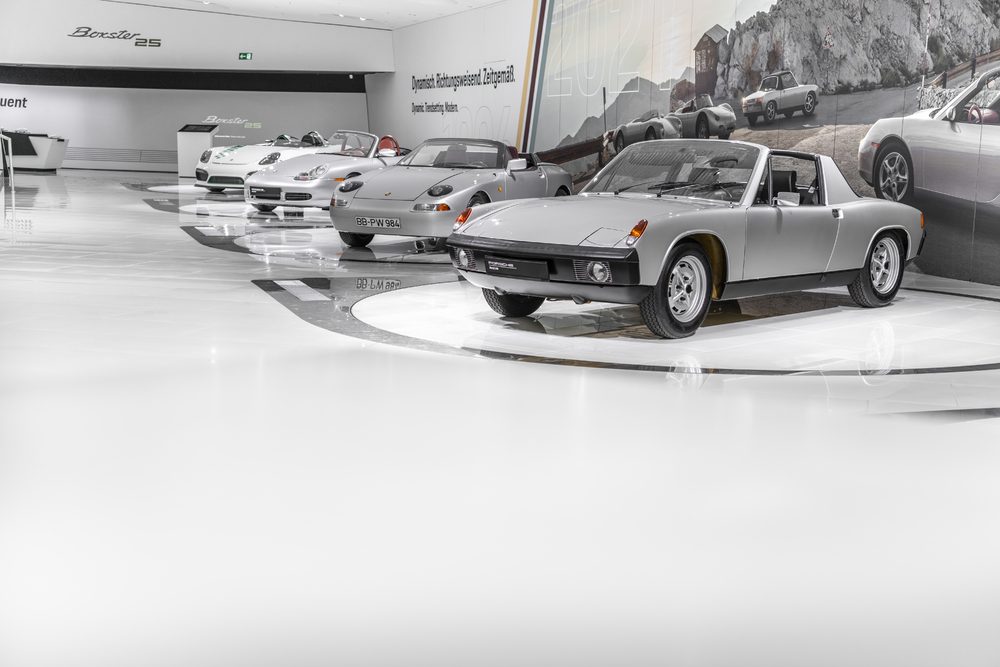 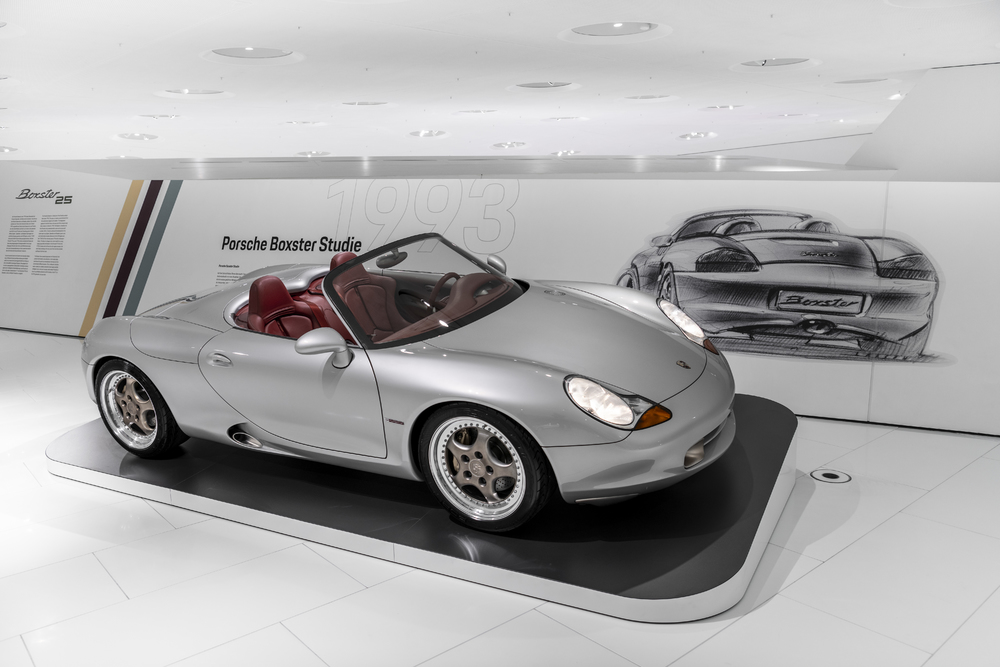 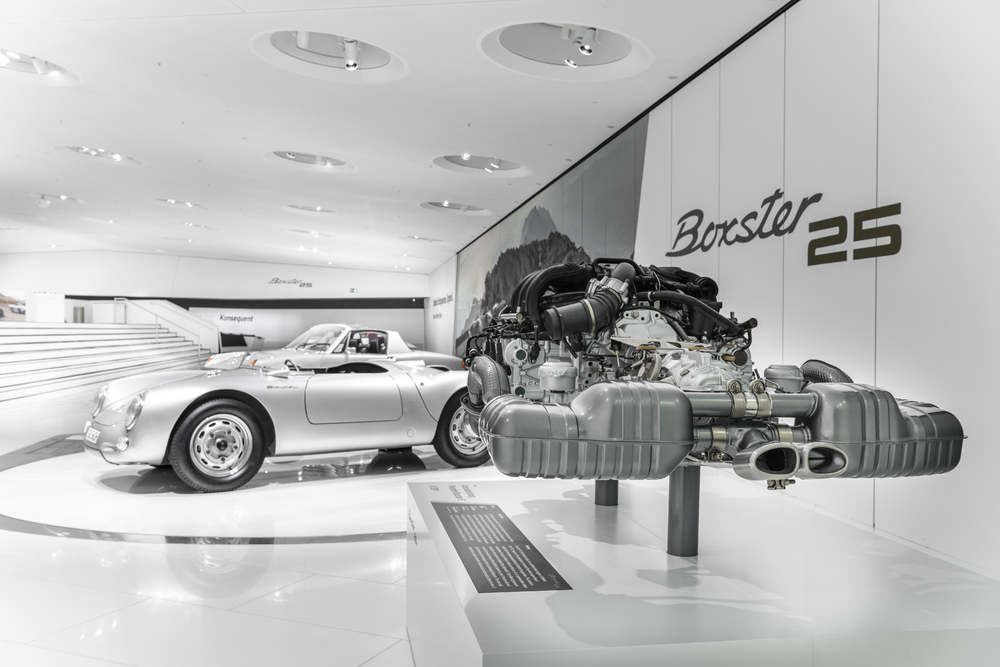 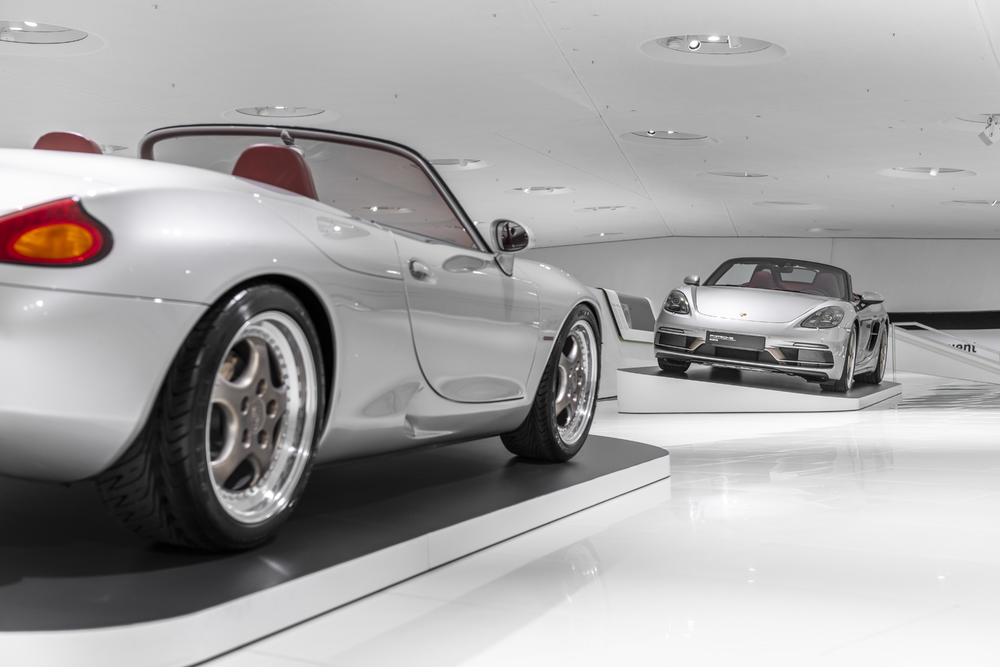 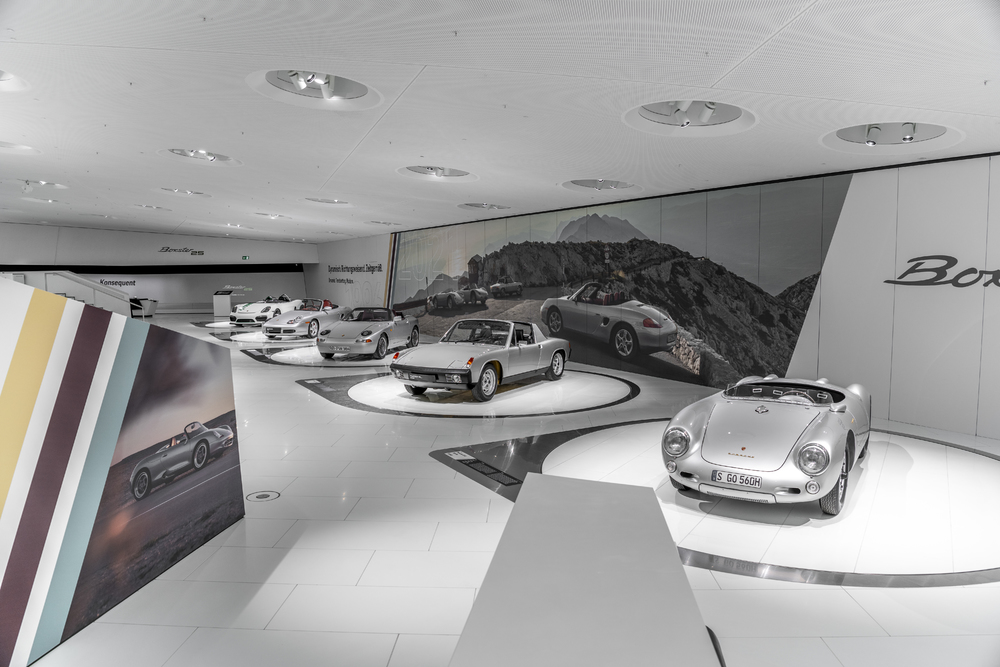 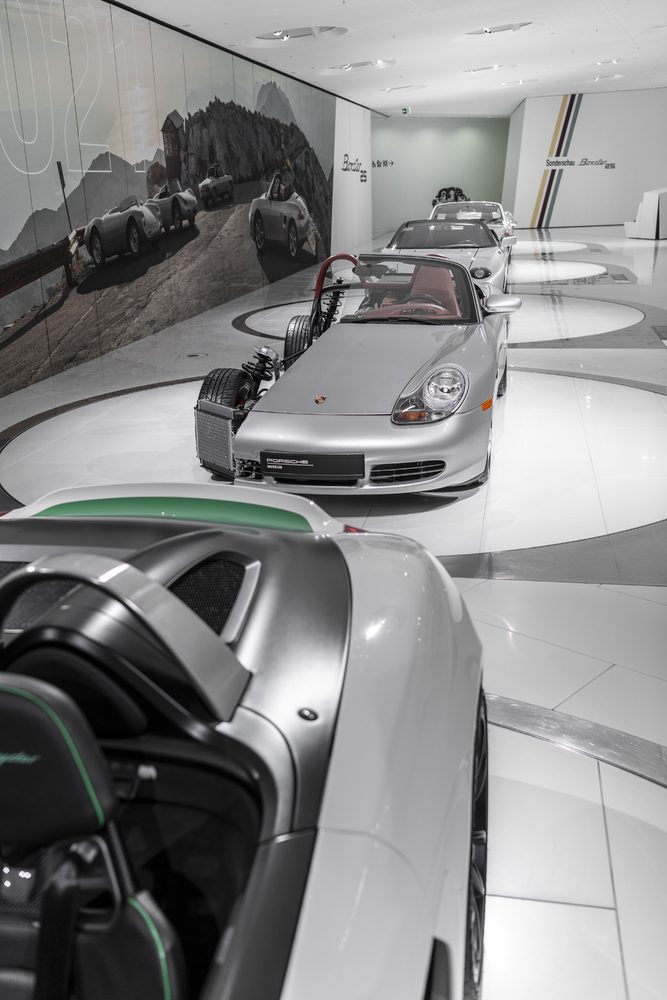 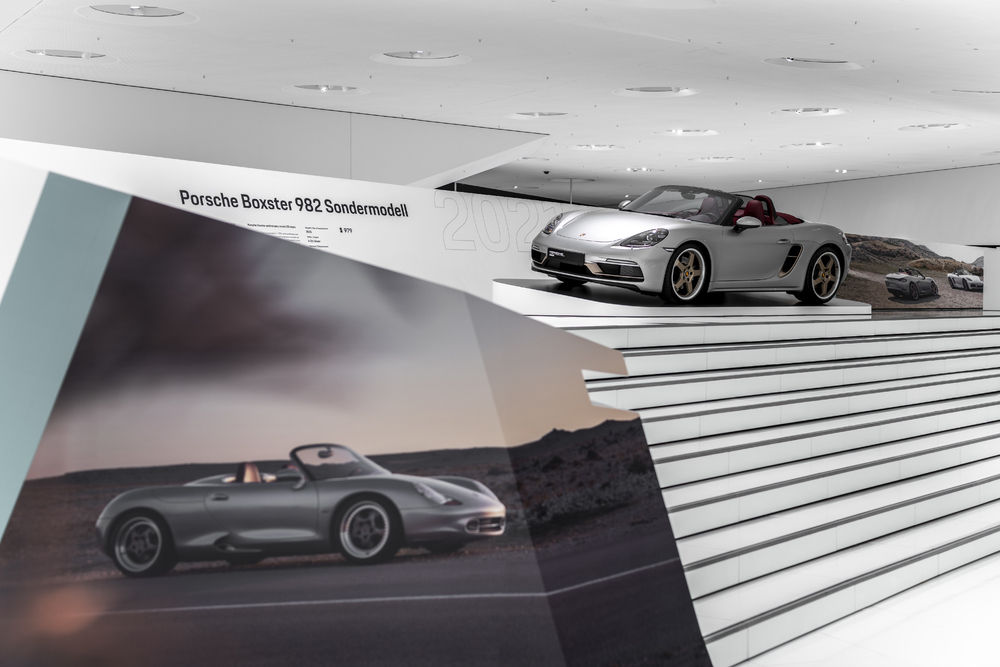 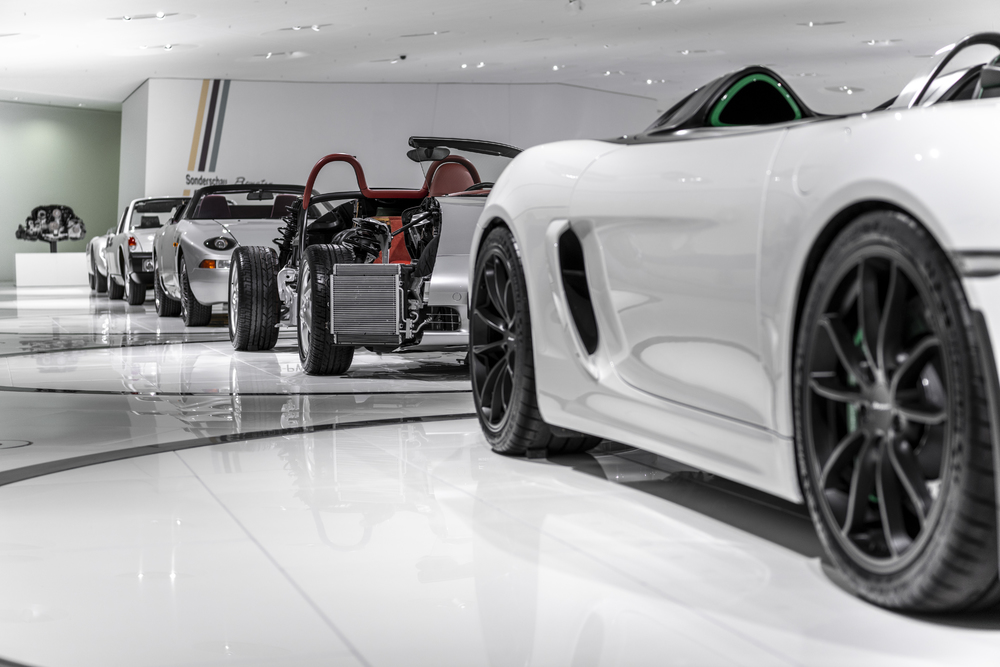 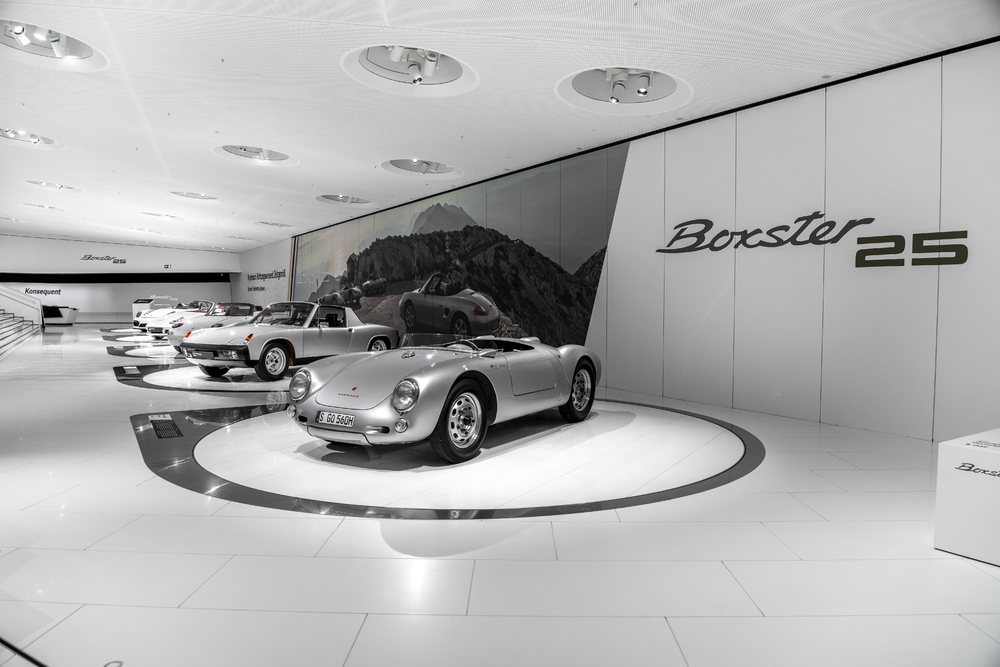 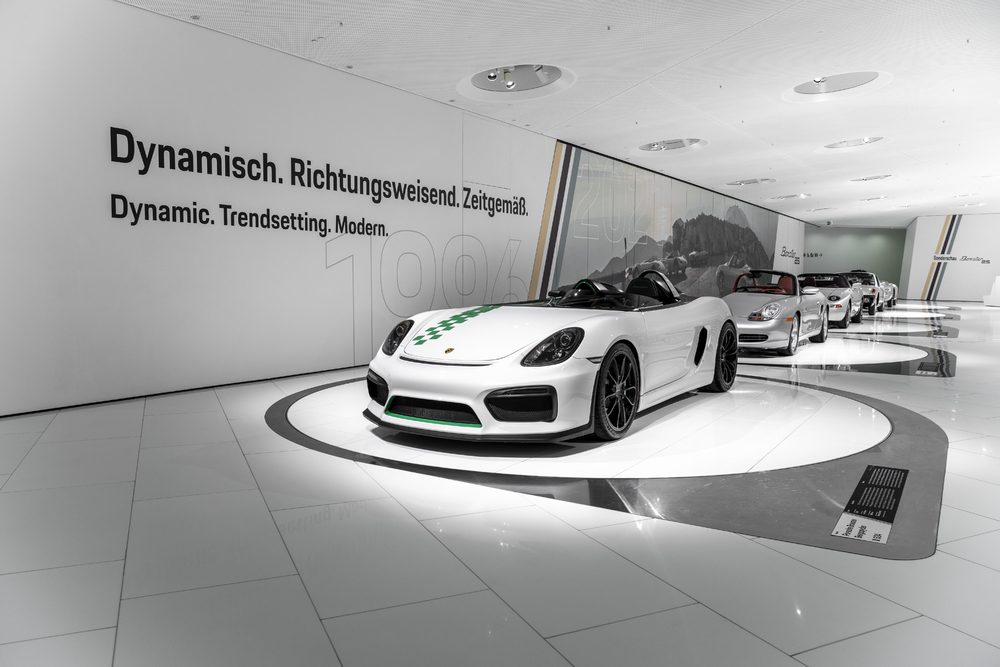