John Horsman was born 22nd November 1934, in Oldham, Lancashire in the UK.  Horsman attended Uppingham School. After leaving Uppingham school, he completed military services as an officer in the Royal Air Force. As soon as Horsman completed his military service, he started Mechanical Engineering studies at Cambridge. During his studies, Horsman loved visiting race tracks as a photographer. A passion for motorsport developed.  In 1958, John Horsman graduated with honours.

John Wyer, who was working for Aston Martin Lagonda as the managing director, offered John Horsman a graduating apprenticeship. And that was the start of a decade long friendship and relation. Initially Horsman worked at Brown Industries, that made , among others, the gearboxes for Aston Martin. Later John Horsman moved on to the Aston Martin’s design and experimental department as a project engineer. In 1961, the relationship with John Wyer was tensioned and Horsman became Wyer’s assistant.

Horsman and the Ford GT40

In 1964 John Wyer took a job at Ford Advanced Vehicles Ltd, with Horsman in his footsteps.  John Horsman had the responsibility  for the construction and preparation of the program that produced the legendary Ford GT40. The Ford Factory GT40 program ended after 2 victories in the 1966 and 1967 Le Mans 24H. The John Wyer Automotive Engineering was the successor, with John Horsman as the executive director and chief engineer of the company. Sponsored by the Gulf Company, they won the 1968 and 1969 Le Mans 24H in a Ford GT40.

Horsman and the Porsche 917

In 1970 the Porsche factory team wanted the John Wyer Automotive Engineering to campaign the works Porsche 917s. In its early days, the Porsche 917 was a fast but flawed machine.  Handling the car was not an easy job. Rear lift was so high that some works drivers refused to drive the car. Vic Elford once said the Mulsanne straight is too narrow to get the car run straight.  John Horsman found the solution to change the body of the Porsche 917 and make handling of the car easier.

It was during tests at the Österreichring in 1969, that Horsman noticed plenty of dead insects on the nose of the car. However, there were hardly none on the tail. Horsman realised that the insects followed the flow of the air, indicating that it didn’t touch the surface at the rear.  Raising the rear to it came in the airstream, would create downforce. Brian Redman was on duty to perform the test drive. In stead of the supposed 2 laps, he drove 7.  His first reply after he jumped out of the car was ‘Now this is a race car”; Horsman’s solution led directly to the creation of the short-tail version better known as the Porsche 917K.

In 1976, after Gulf Research Racing closed its doors, Horsman moved to Scottsdale, Horsman then joined the GTC company and its GR8   finished second at Le Mans in 1976 and again in 1977. The GTC Mirage programme continued for 2more years. Then  John Horsman was reunited with his friend, Vern Schuppan, running the Australian racer’s McLaren IndyCar team. As a member of the Vern Schuppan’s team, Horsman returned to Le Mans 4 more times.

In 1983, Horsman moved to Tucson, Arizona, where he ran a classic car racing team with his friend Bib Stillwell. After his retirement, Horsman found the time to write down his memories in ‘Racing in the rain, My Years with Brilliant Drivers, Legendary Sports Cars, and a Dedicated Team’. A must-read for every race fan, and a book that showcases the eye for detail of John Horsman. After his retirement, John Horsman could look back at a career in which he worked together with some of the best racers ever :  Jacky Ickx, Brian Redman, Pedro Rodriguez, Jo Siffert, Derek Bell, Jackie Oliver, Mike Hailwood, David Hobbs, Vern Schuppan,  Richard Attwood to name just a few.

John Horsman’s career in motorsport spanned the greatest decades in sports-car competition – the 1960S and 1970S – and then extended into the 1980S. What makes it even more unique is the fact that he was always very succesful. One of the quotes that describes Horsman to the fullest is : “I’m not a designer. Designers design cars, I make them better’.  And that’s exactly what he did with the Porsche 917. 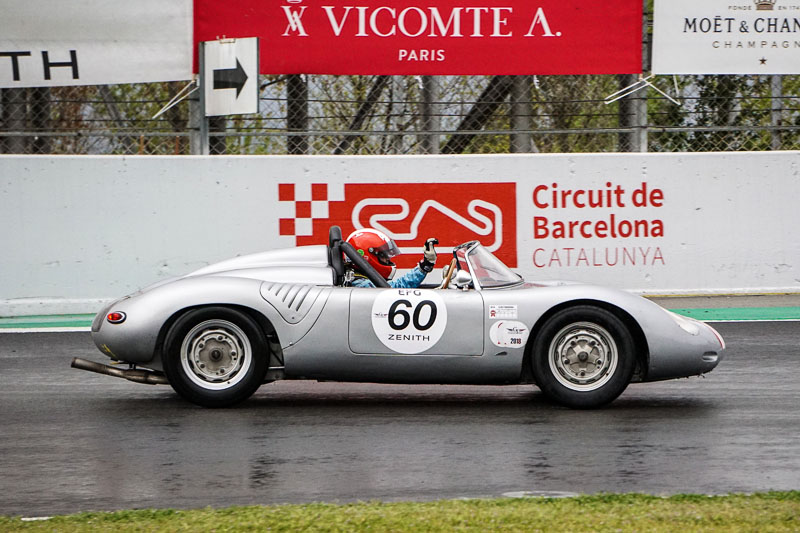