Porsche has unveiled the latest generation of the world’s top-selling racing car: the Porsche 911 GT3 Cup (992) model year 2021. From the start of the 2021 season, this racer will be campaigned in the Porsche Mobil 1 Supercup as well as the national Porsche Carrera Cups in Germany, France, Asia and Benelux. The car will even come into action for the first time in North America.

The spectacularly styled Cup car is the first racing version based on the current 992 generation and the first makes-cup racer of the sports car manufacturer to feature a wide turbo-spec body. Producing around 375 kW (510 hp), it exceeds the output of its immediate predecessor by 25 horsepower. Moreover, the new GT3 Cup can run on synthetic fuels, which significantly lowers CO2 emissions under racing conditions.

The lap times of the completely new Cup 911 should be slashed by a good one per cent, depending on the track layout. Delivery to teams will begin in February 2021. The new 911 GT3 Cup is available with immediate effect at a price of 225,000 Euros plus country-specific taxes.  You can find the full technical specifications of the Porsche 911 GT3 Cup (992) model year 2021 here.

History of the Porsche 91 Cup cars

Porsche presented the very first 911 Cup car in 1990. It was based on the  Porsche 911 (964) generation and headed into its debut season in the German Porsche Carrera Cup with 260 hp. From 1993, it was also raced in the newly established Porsche Supercup, which ran as part of the Formula 1 support programme. Over the next years, five more generations of this exceptionally successful racing vehicle followed – of which to date a record number of 4,251 units have been produced.

“The 911 made history as the baseline model for the Carrera Cups and the Porsche Mobil 1 Supercup – no other racing car has found as many satisfied customers since 1990 as the 911,” states Michael Dreiser, Director Sales Porsche Motorsport. “The new 911 GT3 Cup now starts a new chapter.

Our goal is to pass the 5,000 mark in production over the coming years. Like its ancestral lineage, this model will also assist a whole new generation of talented racing drivers on their path to professional motorsport and shape the face of our customer sport commitment around the world.”

The groundwork for the latest model was laid in 2018. Concrete development began in early 2019. The main development goals of the team led by project manager Jan Feldmann were to further improve performance, achieve a more aggressive design, easier handling and greater durability with less outlay in terms of time and maintenance. The result is reflected in many aspects of the new racing vehicle, which, like its predecessor, rolls off the production line in Stuttgart-Zuffenhausen alongside the 911 production models.

“We wanted to position the new 911 GT3 Cup even more as a professional racing car, while also making it more cost-effective for the teams to run,” explains Feldmann. “We were particularly successful in achieving this thanks to its striking appearance, the improved suspension and intelligent solutions for electrical details. The handling of the new 911 GT3 Cup is noticeably more precise and even more fun. With its improved performance and the optimised cockpit, it’s the best Cup car that Porsche has ever built.”

One of the most striking features of the new 911 GT3 Cup is its optimised aerodynamics and the overall more muscular appearance – it looks even more impressive at first glance. This is partly thanks to the wide turbo-spec lightweight body that is being used for the first time in the Cup car. Measuring a total of 1,902 millimetres in width, it exceeds the rear width of the previous model by 28 millimetres and is distinguished by its additional cooling air inlets in front of the wheels. Furthermore, the front axle of the 992 generation of the 911 is also significantly broader.

Thanks to additional flared fenders, the new 911 GT3 Cup now measures as much as 1,920 millimetres at the front axle. This opens the door for a harmonious wheel-tyre combination with 12-inch wide rims on the front and 13-inch wheels at the rear axle. This is typical for GT racing and has a positive effect on the handling and driveability of the racing car.

At the same time, the seventh generation of the Cup racer generates noticeably more aerodynamic downforce. This is thanks to the combination of the rear spoiler with the larger rear wing and front apron, which was specifically adapted to racing by means of a front lip spoiler and strategically-positioned separation edges. The eleven-stage adjustable rear wing with a ‘swan neck’ mounting ensures uninterrupted under-wing airflow. This improved aerodynamic efficiency also ensures more stable handling, especially in fast corners.

The body of the 991.2 generation Cup car consisted of 70 per cent steel and 30 per cent aluminium. The ratio in the successor has been switched. The fact that the vehicle still weighs around 35 kilograms more with a dry weight of 1,260 kilograms is due, for example, to extra struts being added to the steel safety cell.

The removable escape hatch in the roof complies with the latest FIA standards. All windows in the GT3 Cup are made of lightweight polycarbonate and have scratch-resistant hard-coat glazing. The doors, engine hood, and rear wing are made of carbon-fiber reinforced plastic. In contrast, the front hood with its distinctive exit-air duct and central air intake is a prime example of the intelligent use of materials: Like in the 911 Carrera, it is made of aluminum – which lowers repair costs in the case of an accident.

The designers put a lot of thought into the ergonomics specifically for the drivers. In addition to the incline, the new racing seat can now be adjusted in two height settings. In conjunction with the adjustable steering column, this ensures an ideal fit for every driver’s stature. A range of padding thicknesses allows the seats to be adapted to the needs of individual drivers. The redesigned, open-top, motorsport multifunction steering wheel made of carbon-fiber is yet another development adopted from the 911 GT3 R.

Following drivers’ feedback, its illuminated buttons have been rearranged. The so-called Rubber Switch Panel (RSP) with its ten large buttons on the right is reminiscent of a control element in the Porsche 919 Hybrid. These buttons are easy to use, even in the heat of the race, and are given designated central functions such as lighting and ventilation or to change tire settings from dry to wet tires.

One example of a clever enhancement to details is the adjustment of brake balance: Now, it can be intuitively controlled via a rotary knob switch on the outside right of the RSP in or against the direction of travel – depending on whether the front axle needs more or less brake pressure.

The designers have revamped the centrally-positioned, 10.3-inch color monitor. The screen prioritizes the display of key data and information for the driver while racing. Displayed alongside the engine revs are water and oil temperatures, the gear currently engaged, and error messages or information on important baseline settings, such as “wet” for racing in rain. After the readout of the data, the design of both the display and the computer monitors are aligned so that the driver and race engineer see the same information. This helps with analyses after each session.

The electronics are designed to be user-friendly for easier error analyses and specific help in problem-solving. Around 700 diagnostic options are available. Specific software summarises all information more clearly and comprehensibly. Optional vehicle functions such as ABS or traction control are already stored in the system. They can be activated via a digital code. In the Porsche Mobil 1 Supercup and in most national Carrera Cups, these driving aids are switched off: in these championships, the talent of the drivers alone is what counts.

Another example of subtle, sophisticated solutions in the new 911 GT3 Cup can be seen in the arrangement of the electronic components: Motorsport control units and data loggers have been relocated from the passenger footwell to the right rear compartment. As a result, they no longer hinder the installation of a second seat, for instance when ‘racing taxi drives’ are required.

The suspension of the Cup 911 offers the finest in racing technology. While the rear axle essentially remains unchanged compared to the production model, the front wheels are now controlled by double wishbones and Uniball bearings – like in the 911 RSR, Porsche’s current top racing model. Through this, the dampers are no longer exposed to lateral forces, only axial forces. This ensures more precise turn-in behaviour and gives a better feeling for the front axle. The shock absorbers have also inherited the cutting-edge valve technology from the 919 Hybrid and 911 RSR. Fully electro-mechanical power steering has been introduced into the 911 GT3 Cup for the first time. This means that the hydraulic pump and associated hydraulic lines are no longer needed.

In terms of the engine, the 911 GT3 Cup remains true to the naturally aspirated principle. In the racing version, the four-litre, water-cooled flat-six engine develops 375 kW (510 hp). Its high-revving unit with dry-sump lubrication reaches top performance at 8,400 rpm – up from the previous 7,500 rpm. It redlines at 8,750 rpm with maximum torque of 470 Newton metres at 6,150 rpm. A single throttle butterfly system with two resonance flaps ensures an even more spontaneous response, and in conjunction with the catalytic converter racing exhaust system, produces an awe-inspiring sound. Three different exhaust systems are available to choose from – depending on the racing series, the regulations and the racetrack. Bosch supplies the MS 6.6 electronic engine management system.

Like with its immediate predecessor, the six-cylinder only needs a maintenance check after 100 hours of track time. The engine is connected to the sequential, 72-kilogram six-speed dog-type gearbox via a single-mass flywheel and a three-plate sintered metal racing clutch. Gear changes are made via a paddle shift on the steering wheel, with a “minor inspection” of the gearbox needed after 60 hours of racing – which corresponds to roughly two years in the Porsche Mobil 1 Supercup. A major overhaul is due after 120 hours of racing. The shift barrel actuator is operated by an electric servo-motor, replacing the previous pneumatic unit. The advantage: even faster gear changes, the option of live diagnoses and a lowered risk of damage, for example in the event of gearshift errors.

• Every Cup car from Porsche Motorsport is now delivered with a complete accessory kit, which includes, for example, all special tools and wishbone spacers required for track adjustment. Hence, the ex-works 911 GT3 Cup is ready to race without customer teams having to order these parts individually.
• In the new model generation, the water radiators remain directly behind the front apron. This positioning was deliberately retained: the risk of damaging the radiators prevents an overly aggressive driving style. At the same time, the placing of a strut ensures that minor nudges go unpunished.
• Special brake calipers now enable the brake pads to be changed faster.
• The drive shafts of the rear axle now have a special, more durable motor racing design.
• Textile loops have been reintroduced as attachment points for tow ropes. These replace the previously used steel swivel tow hooks.
• A new central nozzle for the fire extinguishing system improves the distribution of the extinguishing agent inside the cockpit.
• The new positioning of the release unit makes it easier for scrutineers to check from the outside whether the fire extinguisher is working correctly.
• Adapted safety quick releases for the inside door openers improve the ergonomics when exiting the cockpit as well as safety in the event of an emergency.
• The onboard electrical system functions without actual plug fuses. This reduces the number of materials used in the wiring harness and saves weight. The redesign is easier to access thanks to its central positioning.
• Should the engine stall at the start of the race, the hazard warning lights switch on automatically to warn other competitors of the danger. 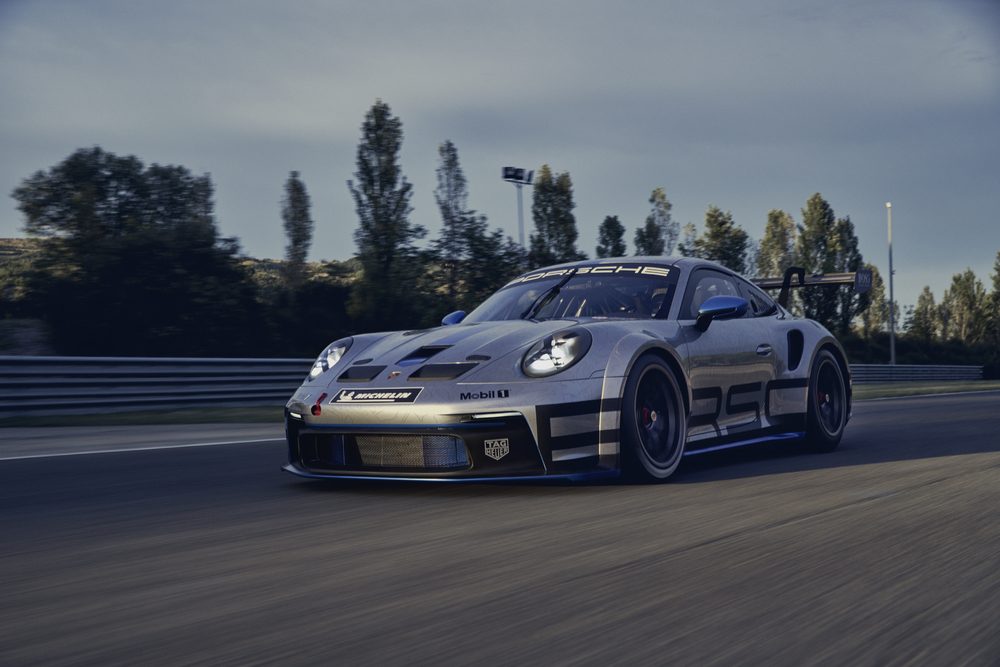 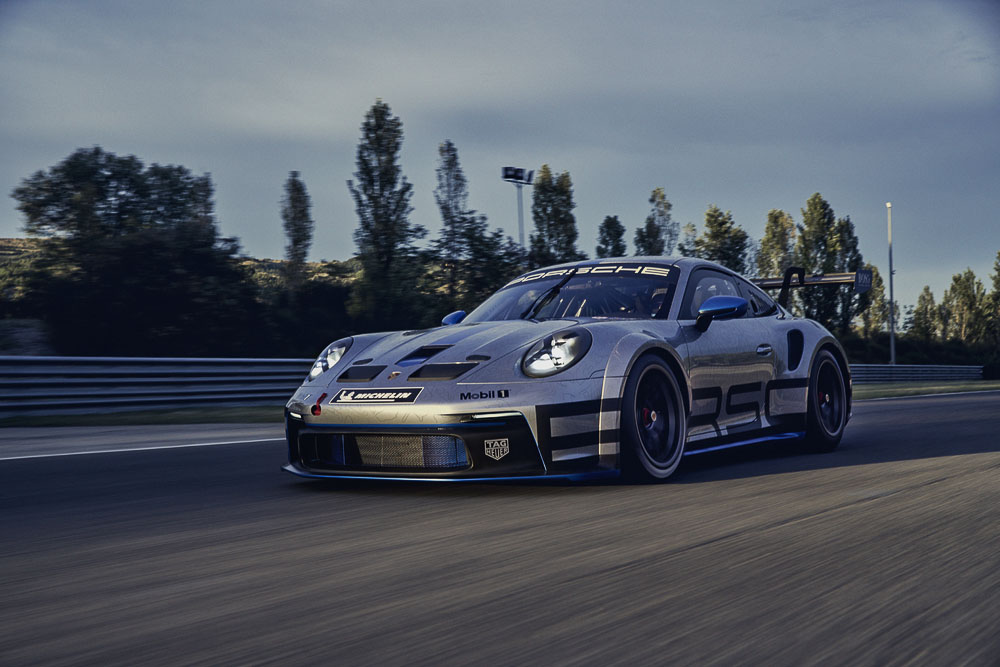 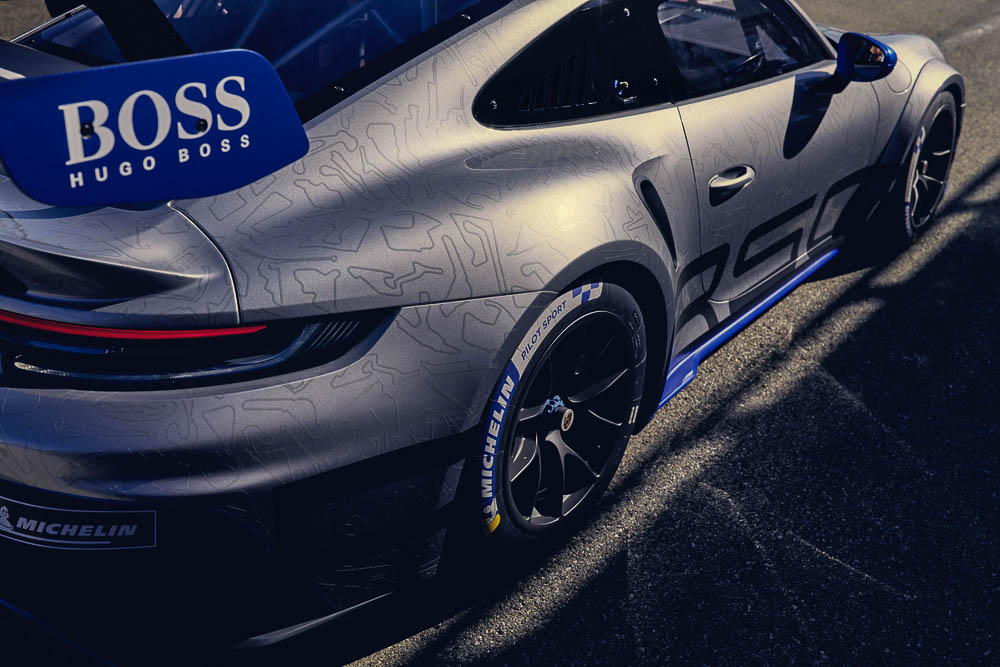 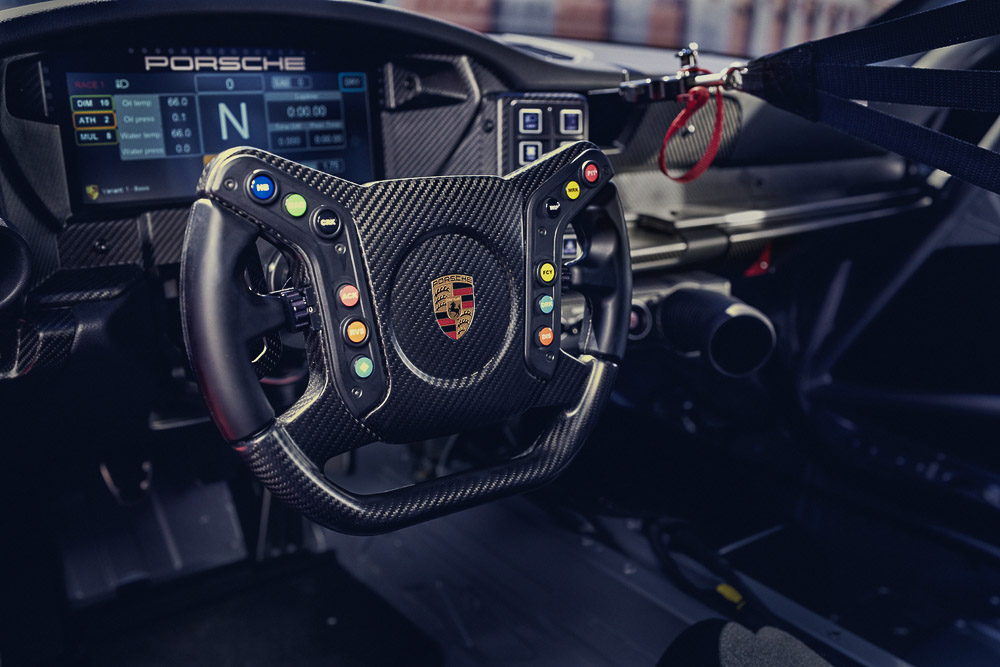 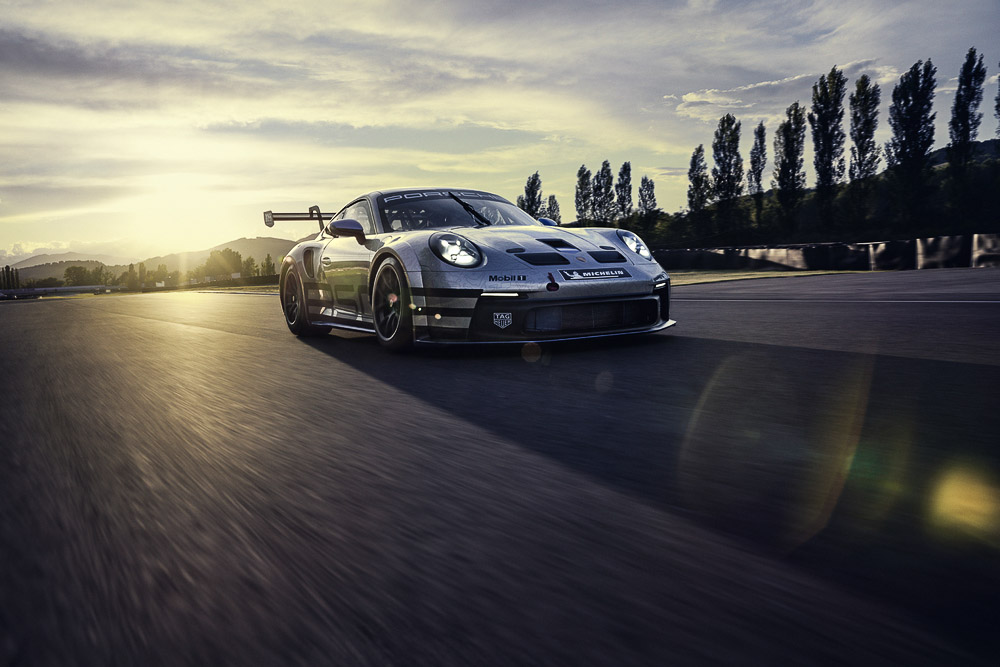 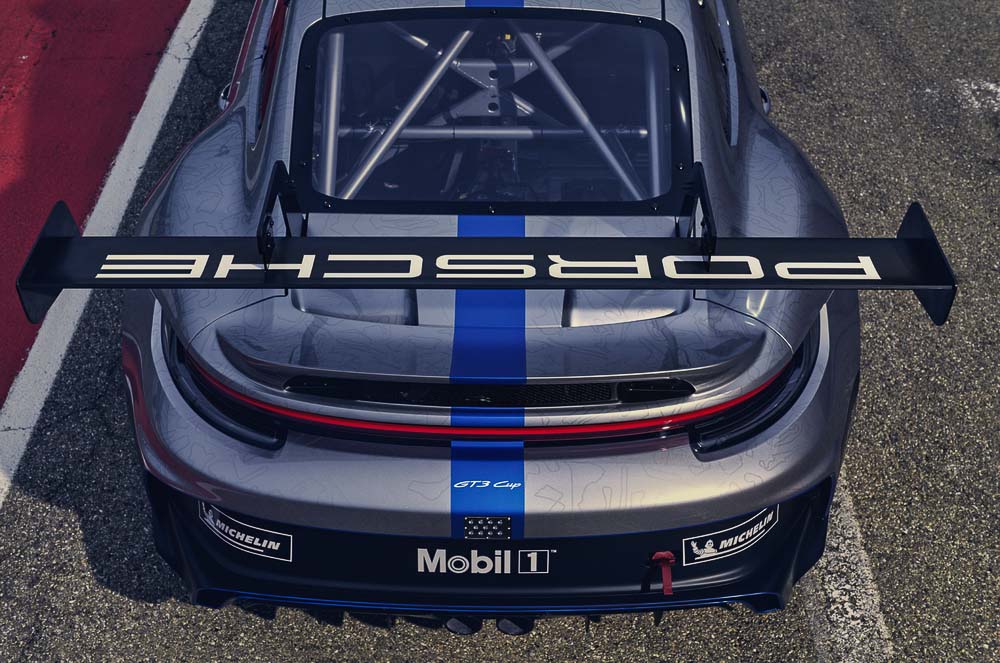 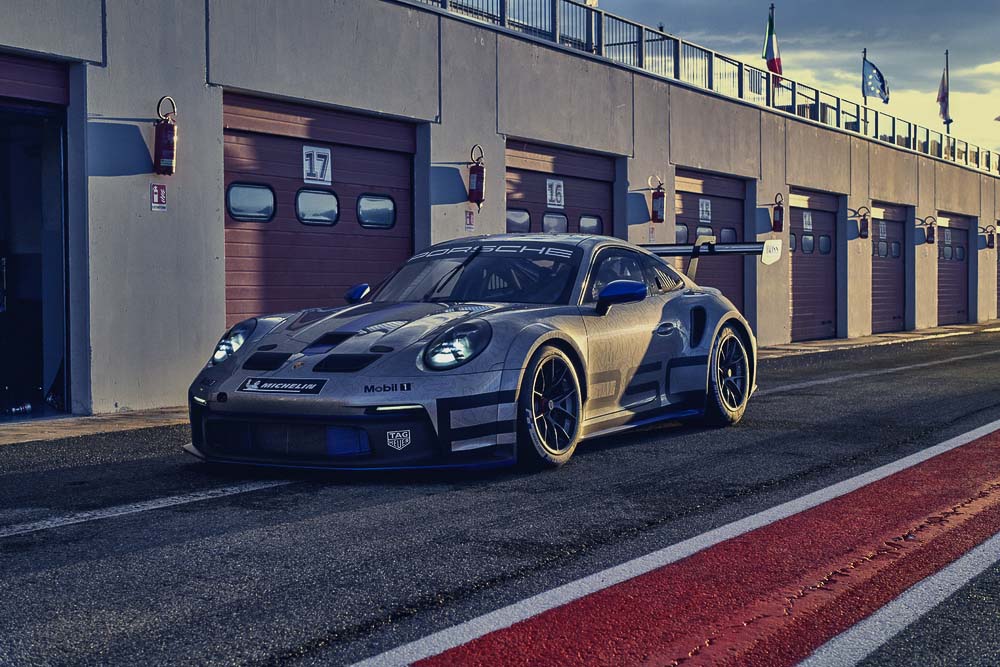 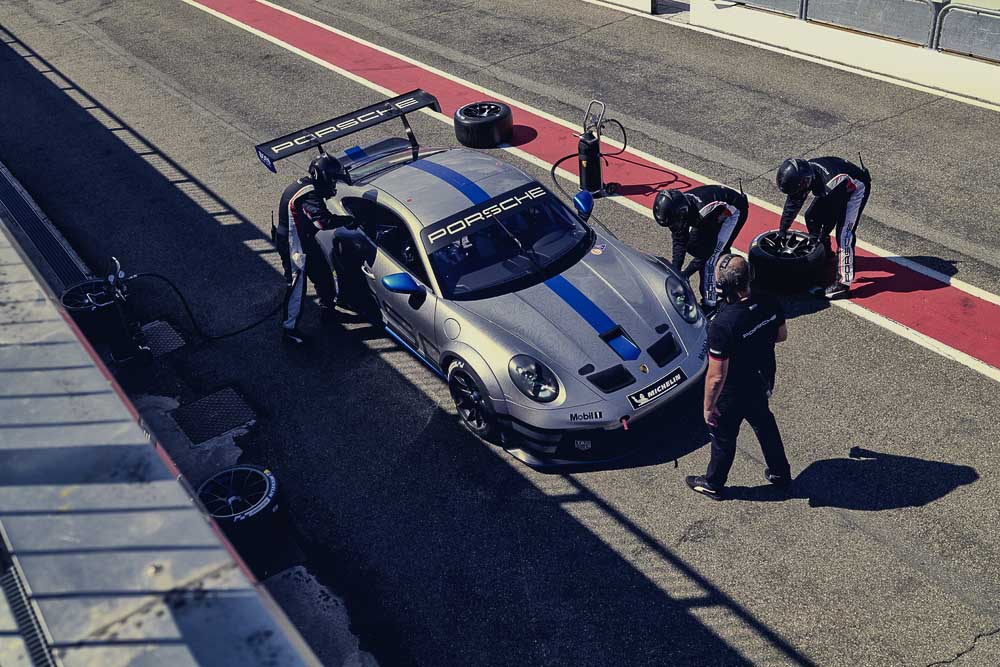 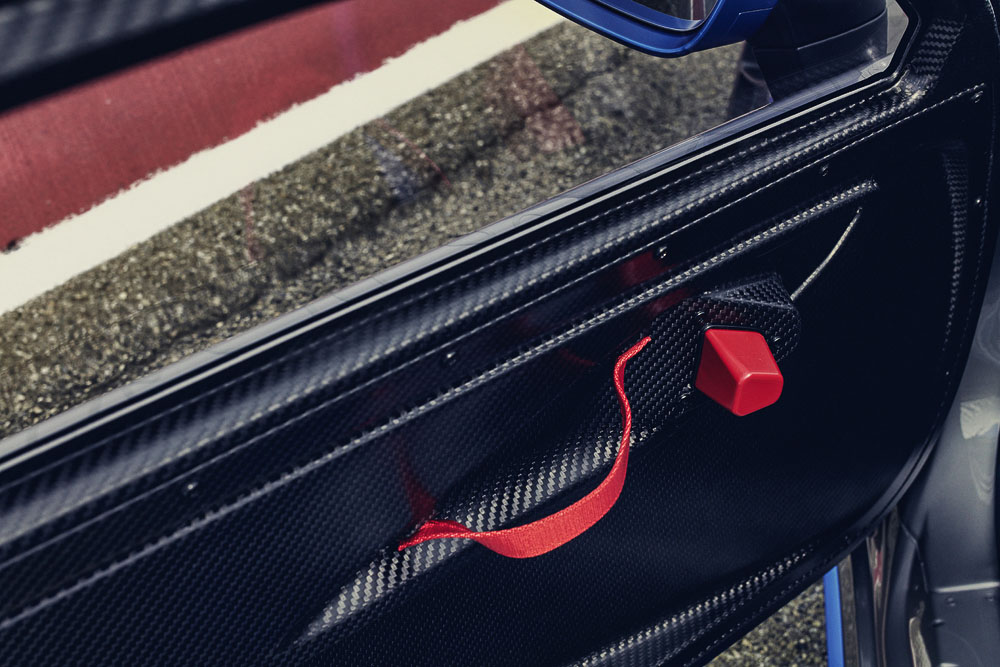 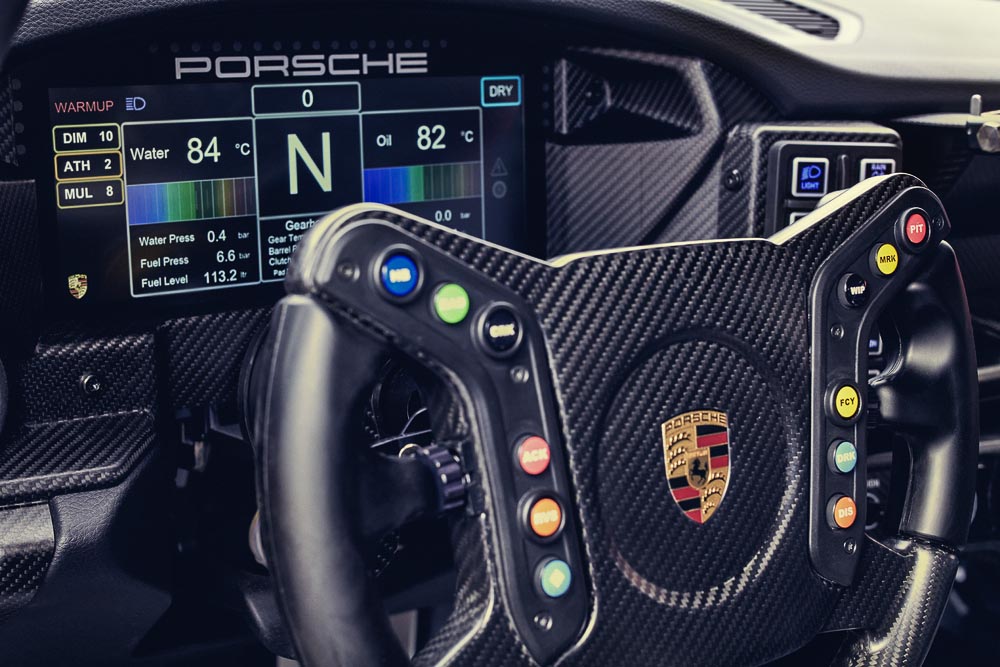 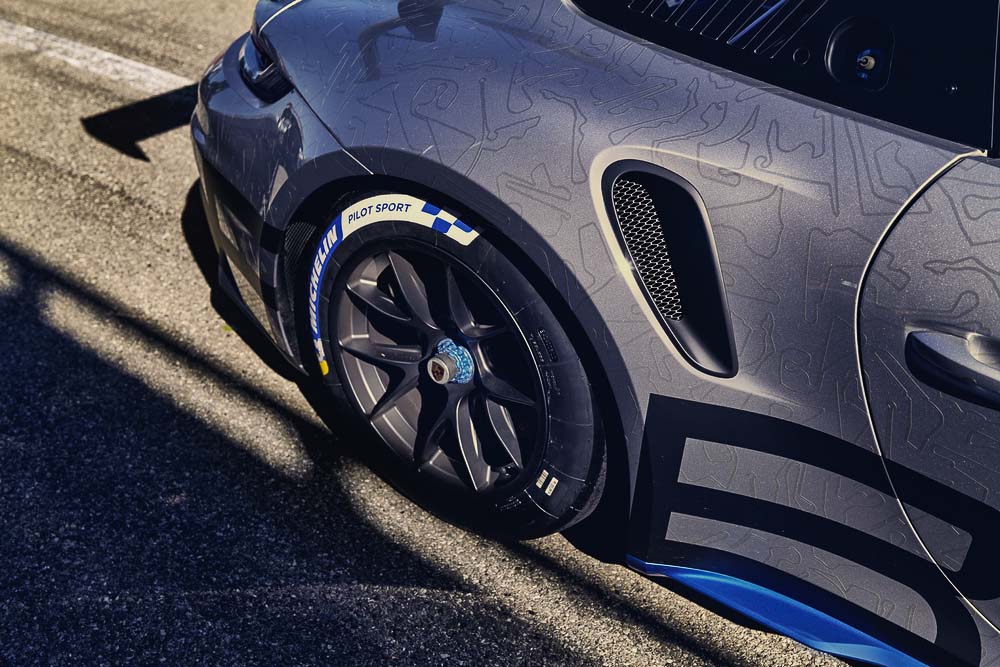 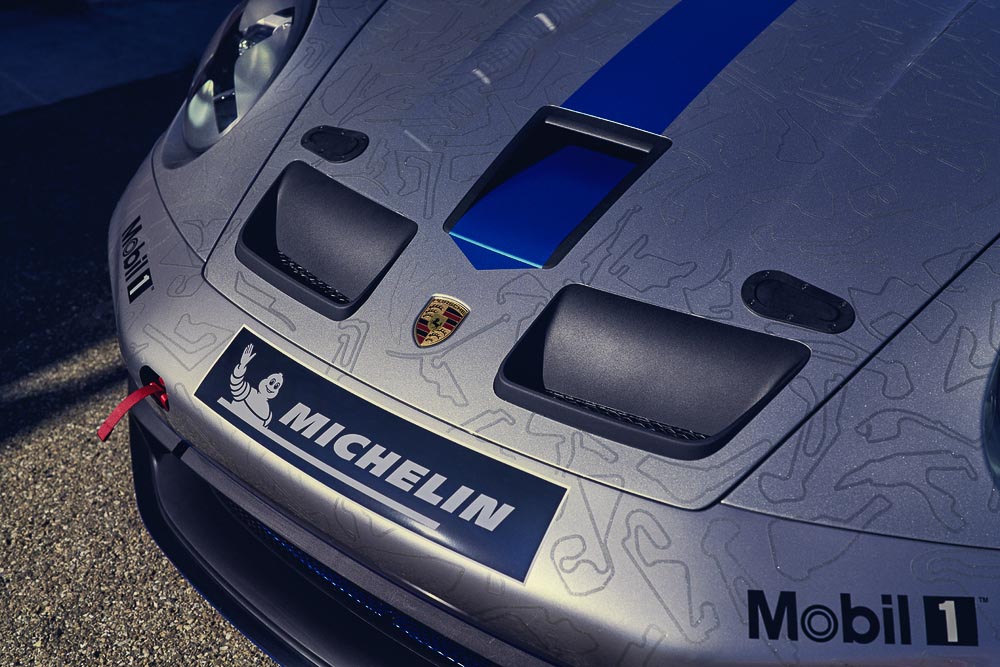 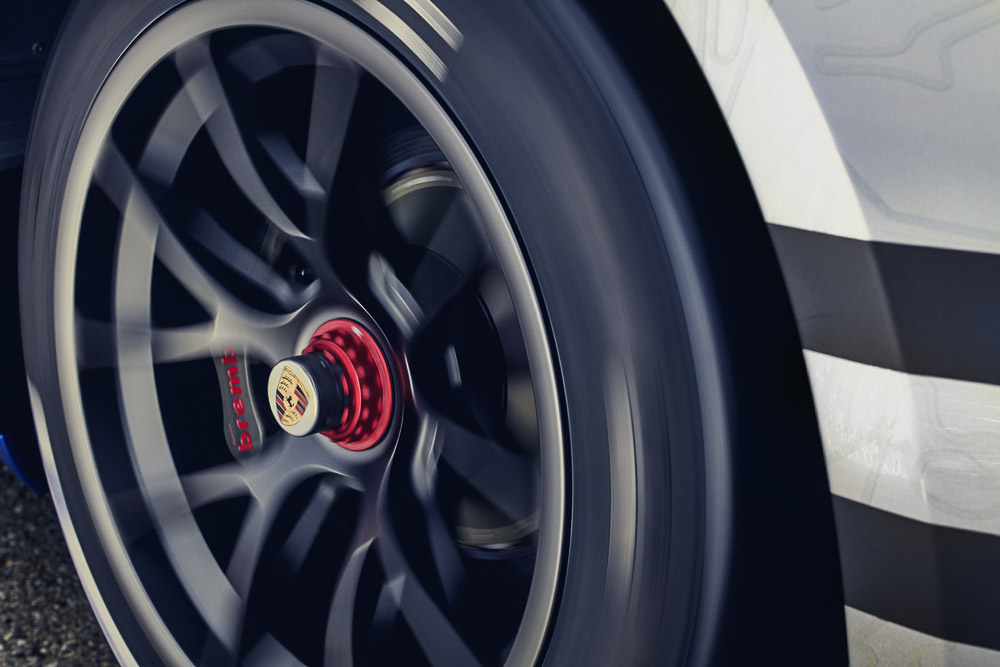 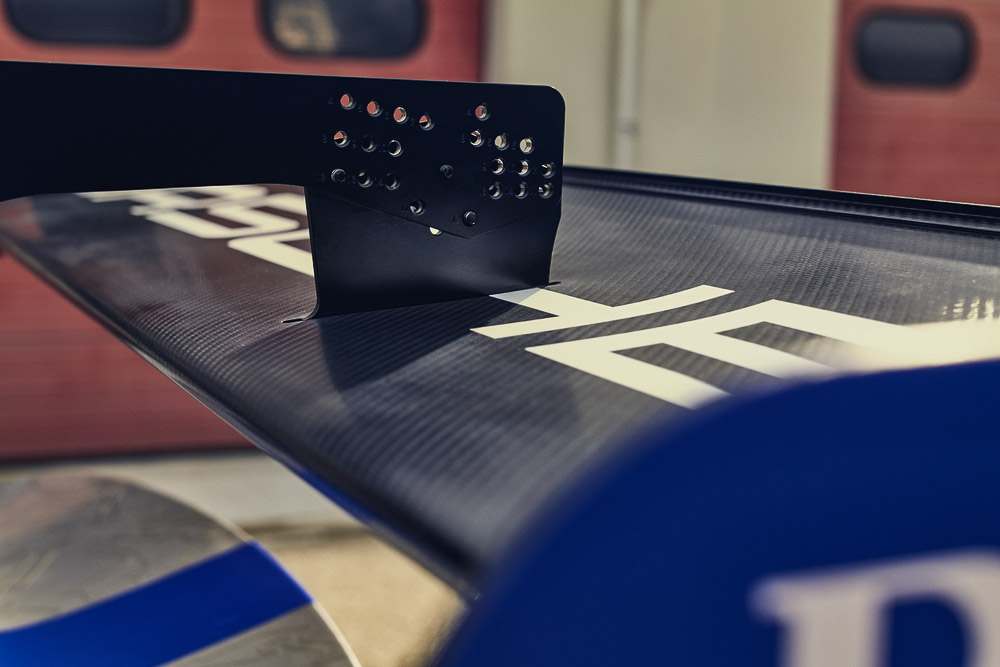 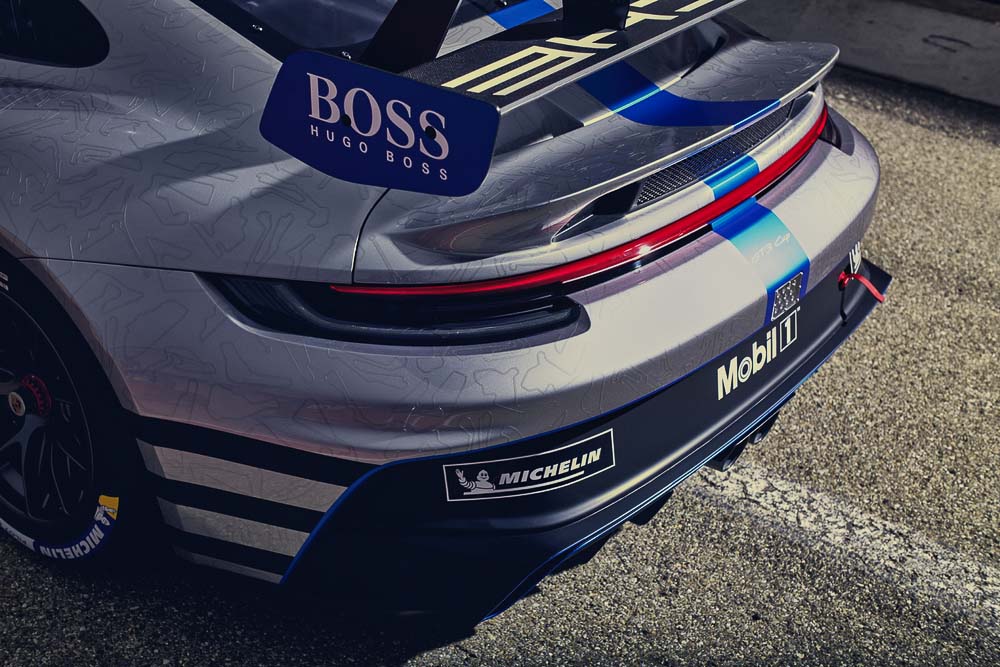 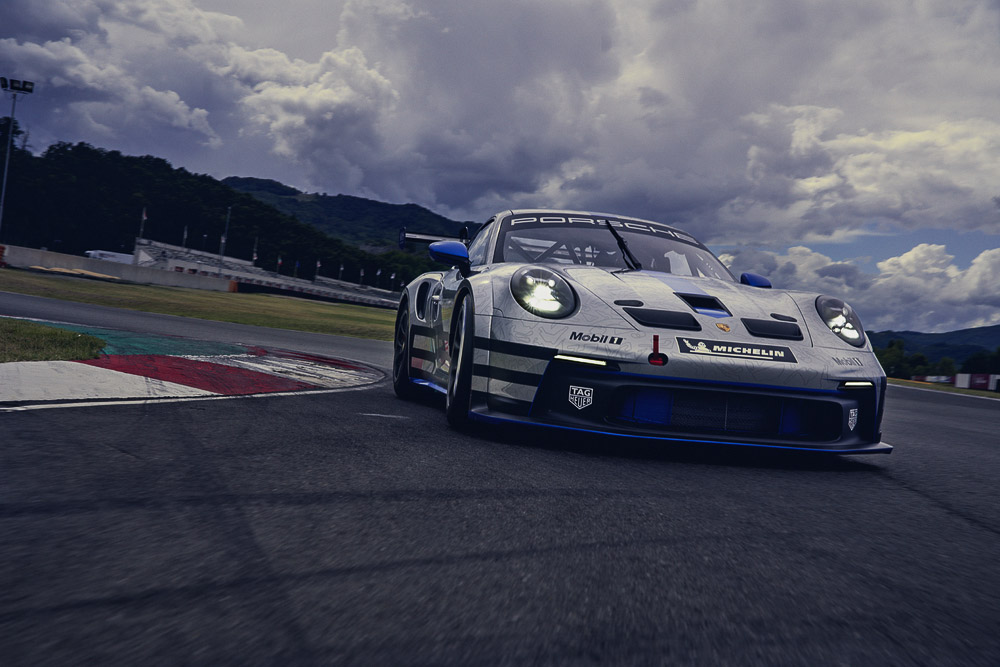 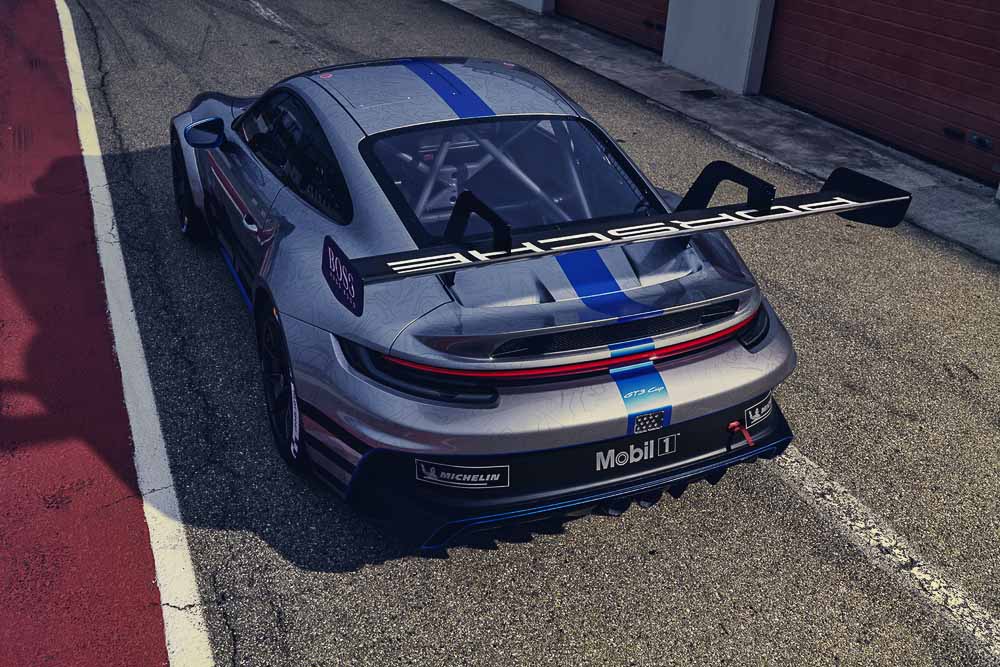 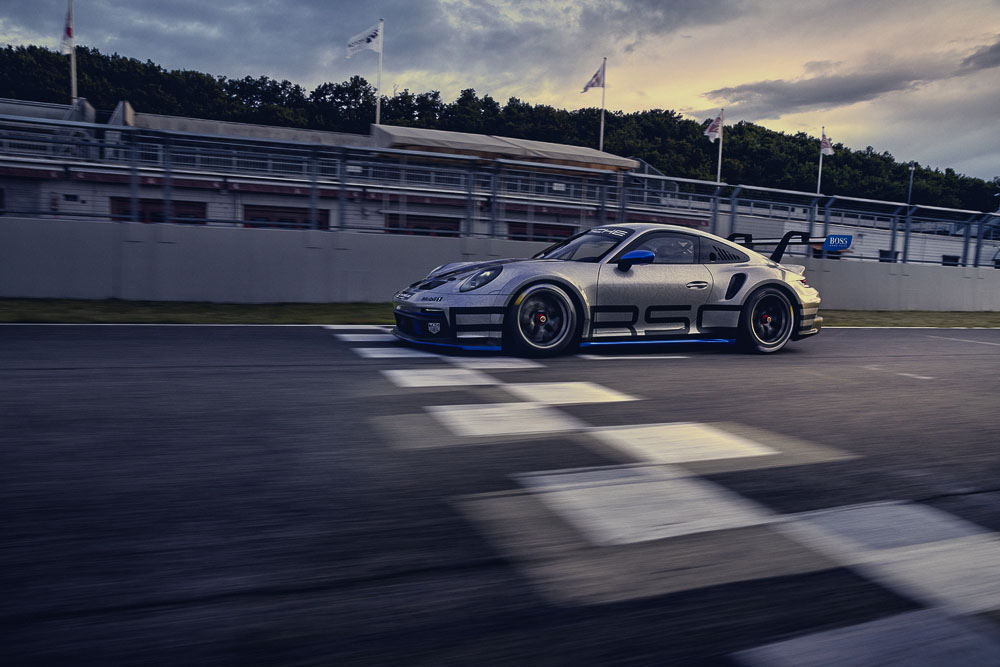 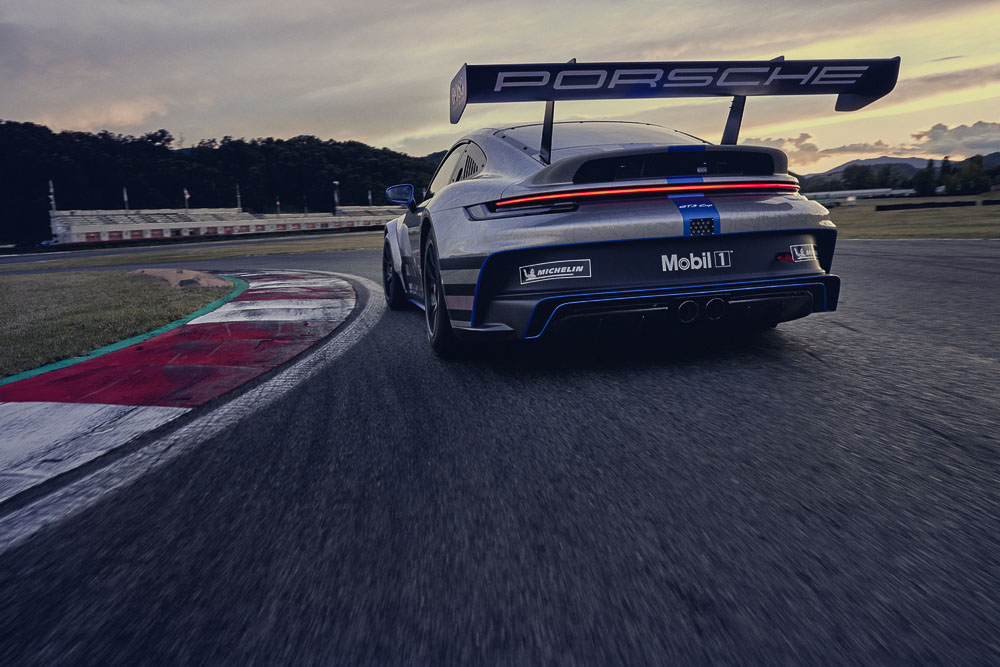 All set for open-top season – the new Porsche 911 Cabriolet