Porsche 963, Porsche Penske Motorsport #7; Porsche RS Spyder, Team Penske #7 (l-r)
The two Porsche 963 from Porsche Penske Motorsport will tackle the 2023 IMSA WeatherTech SportsCar Championship flying race numbers 6 and 7. These digits are well known to the partners, Team Penske and Porsche, from their joint effort with the RS Spyder – and are associated with many great memories for both world-class companies. The ca. 500 kW (680 PS) hybrid prototype for the newly created GTP class will be showcased to the public for the first time in the USA at the final weekend of the 2022 IMSA season at Road Atlanta.

For Porsche Motorsport and Team Penske, numbers 6 and 7 exemplify major successes throughout their motor racing history. From 2006 to 2008, Team Penske’s Porsche RS Spyder raced with the numbers 6 and 7 and clinched all titles in the American Le Mans Series (ALMS), as it was called back then.

“When I see our new Porsche 963 decked out with the race numbers 6 and 7, it evokes wonderful memories of the glory days with the RS Spyder in the USA,” smiles Thomas Laudenbach. The current Vice President of Porsche Motorsport was responsible for developing the engine in the successful RS Spyder between 2005 and 2008. “We won everything there was to win back then. For us, it was about class victories in the LMP2 category but we still managed a major coup: Overall victory at the 12 Hours of Sebring. We’re now eager to add to these great and triumphant times and fight for overall victory at Daytona, Sebring and other events in the IMSA WeatherTech SportsCar Championship.”

Roger Penske adds: “Both the number 6 and number 7 have a rich tradition and history with Team Penske, and we want to build on that legacy as we begin this new journey with the Porsche Penske Motorsport program. Car No. 6 delivered the very first victory for Team Penske with a class win at the 24 Hours of Daytona more than 56 years ago, so we are excited to carry the tradition forward. Our teams have produced many race wins and series championships over the years with both the No. 6 and No. 7 cars and we look forward to adding to that track record of success in the future.”

The first major success in the former ALMS was achieved by the No. 6 Porsche RS Spyder: at the end of 2005, Lucas Luhr and Sascha Maassen promptly clinched a class win at the final test outing in Laguna Seca. Only a year later, they won the title. The No. 7 then came into its prime, notching up a total of 16 LMP2 victories in three years. “Thanks to these wins, the number seven has turned into one of my favorite and luckiest numbers,” explains Timo Bernhard, who scored two championship titles at that time.

Today’s Porsche brand ambassador adds: “The number 7 came to mean a great deal to me back then, but even before that, Porsche and Penske had established a tradition in motor racing with it. Back in the 1970s, Team Penske’s Porsche 917 contested the Can-Am Series, flying the numbers 6 and 7. We were very proud to get the chance to continue this tradition in the ALMS. And it certainly won’t be any different for the drivers in the Porsche 963 next year.”

Support Love for Porsche and book your hotel near Road Atlanta 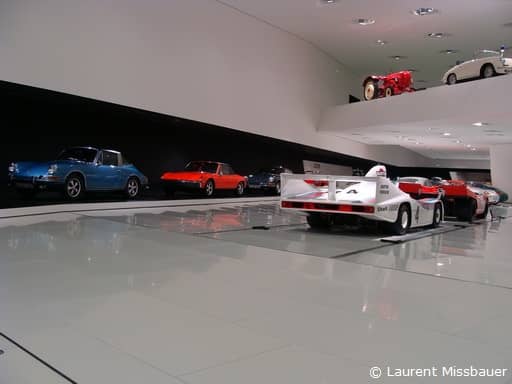