Pedro Rodriguez is undoubtedly the most successful Mexican driver of all time. He won two Formula One Grand Prix and in endurance racing. He achieved one victory in the 24 Hours of Le Mans and four in the 24 Hours of Daytona for a total of 11 in the World Championship. Eight of which with the Porsche 917 KH decorated with the mythical blue and orange colors of Gulf Oil, which sponsored the JW Automotive Porsche team for 2 years. Porsche Latin-America and Porsche Mexico presented a one-off Porsche 911 Turbo S ‘Pedro Rodriguez’ to pay tribute to the Mexican driver.

In 1970 and 1971 Rodriguez helped Porsche win the World Championship of Makes -now called the World Endurance Championship (WEC)- titles. Porsche Latin America and Porsche de Mexico wanted to pay tribute to this hero who lost his life 50 years ago, on July 11, 1971, at the Norisring in Nuremberg (Germany). For the tribute they commissioned Porsche Exclusive Manufaktur to customize a unique car in the world, the Porsche 911 Turbo S ‘One of a Kind’ Pedro Rodriguez, which was unveiled July 11th 2021 during the Sportscar Together Day that took place at the Centro de Alto Rendimiento Pegaso, in Toluca (Mexico).

The one of a  kind Porsche 911 Turbo S ‘Pedro Rodriguez’ will be auctioned this year and the proceeds will go to various charitable causes.

“Pedro Rodriguez continues to be the Latin American driver who has brought Porsche the most triumphs and joy,” said George Wills, president and CEO of Porsche Latin America. “With this unique car in the world, we want to pay tribute to a unique, irreplaceable driver, an idol of the past and a legend of today.

Porsche knows that a driver and a model like this are unrepeatable, one of those unions that transform the world from epoch to epoch. That is why it created this unique car with distinctive details and an unrepeatable design. “This car has unique elements that no other car in the world will be able to have; for example, the name of the eight races won by Pedro Rodriguez with the 917, which are inscribed on the rear spoiler,” said Camilo San Martin, Director of Porsche de Mexico. “Additionally, the configuration with the details and equipment of this unit has been locked in the Porsche configurator, as well as in the production system, so that this unit is literally unrepeatable.

With the help of the family of the legendary Mexican driver, who was involved in the project from the beginning, Porsche Latin America, Porsche de Mexico, Porsche Exclusive Manufaktur, and the Porsche Museum molded this magnificent model that recalls and pays a sincere and profound tribute to Pedro Rodriguez and the 917 KH with which he achieved glory. The model is based on the 911 Turbo S with 650 hp (641 HP, 478 kW) and 800 Nm of torque, which accelerates from 0 to 100 km / h in just 2.7 seconds and reaches a top speed of 330 kilometers per hour.

A Porsche unique in the world

The project came about during Sportscar Together Day 2018, a date to celebrate 70 years since the first car with the Porsche name, the 356 ‘No. 1’, went out of production on June 8, 1948. At the meeting of friends of the brand, the weight and relevance that Mexico has with the history of the Stuttgart brand, which was inspired by the legendary Carrera Panamericana of the 1950s to name its 911 Carrera and Panamera models, was once again evident.

The exterior of the Porsche 911 Turbo S ‘One of a Kind’ Pedro Rodriguez immediately evokes the 917 KH, thanks to its bodywork painted in Gulf blue with an orange stripe running through it, the same colors worn by the race car with which Pedro helped Porsche win the 1970 and 1971 World Championships. The specially designed wheels are painted in high-gloss black, with aluminum center nut. The doors have the characteristic number 2 in black on a white circle, just like the 917 KH with which the Mexican won the 24 Hours of Daytona in 1970 and 1971 and the 1000 Km of Monza in 1971.

Another distinctive element is the plaque located on the B pillar, which has the silhouette of the 917 KH in the colors of the Mexican flag and the name and signature of Pedro Rodriguez, already famous in the world of motorsports. This same detail is reflected in the carbon protectors of the lower door frames, which light up when opened. Similarly, the names of the eight races won by Pedro Rodriguez with the 917 KH are engraved under the rear wing.

The interior of the Porsche 911 Turbo S ‘One of a Kind’ Pedro Rodriguez is fully upholstered in graphite blue leather with orange stitching and details that include the engraving of the 917 silhouette on the headrests of the front seats and Pedro Rodriguez’s signature on the center armrest and on the carbon fiber trim on the dashboard.

The car’s personalization even goes as far as the accompanying key, which not only features the signature of the two-time world endurance champion but is painted in the car’s characteristic blue color. As an exceptional add-on, the car also includes a set of suitcases that fits perfectly into its trunk, all in graphite blue leather with orange stitching and details. 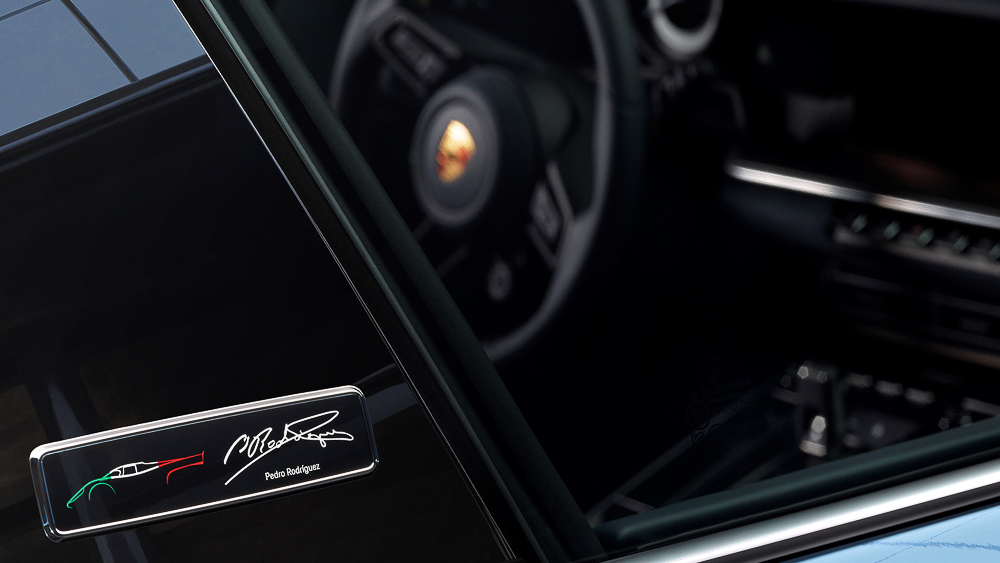 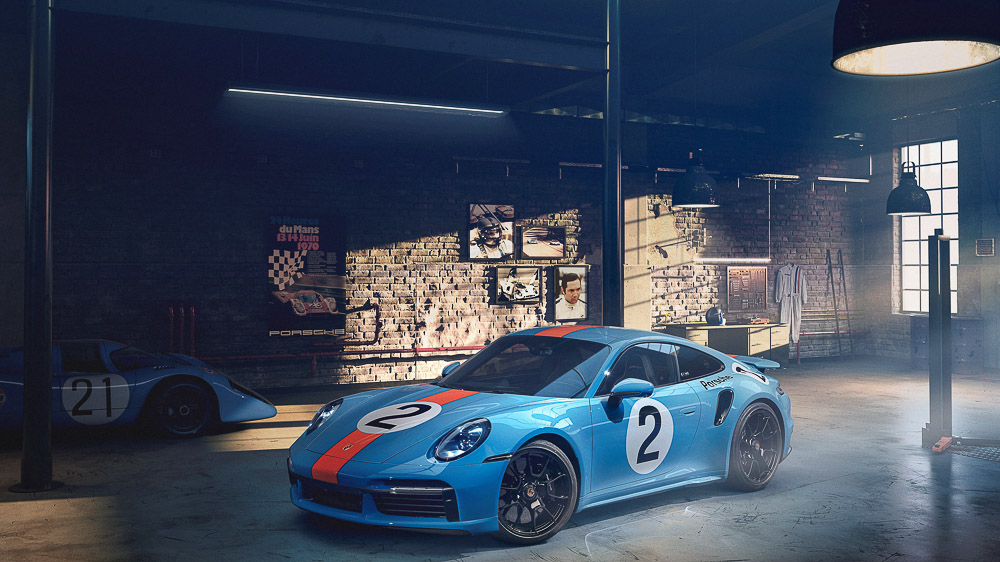 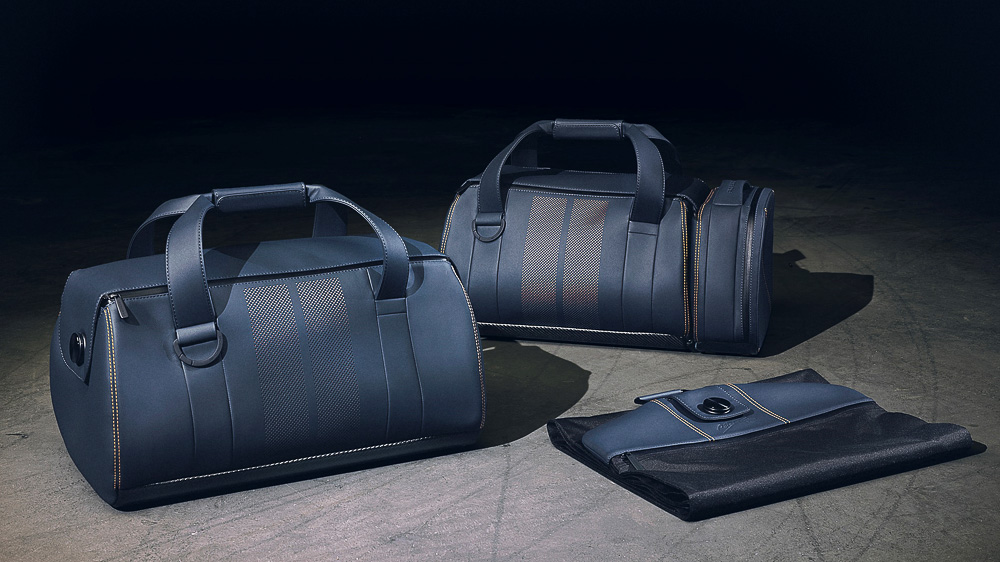 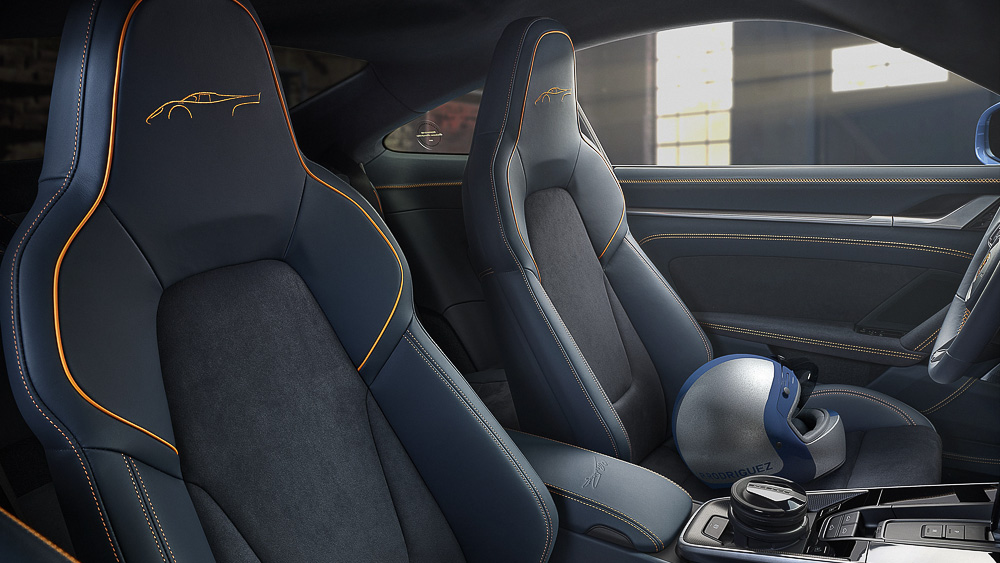 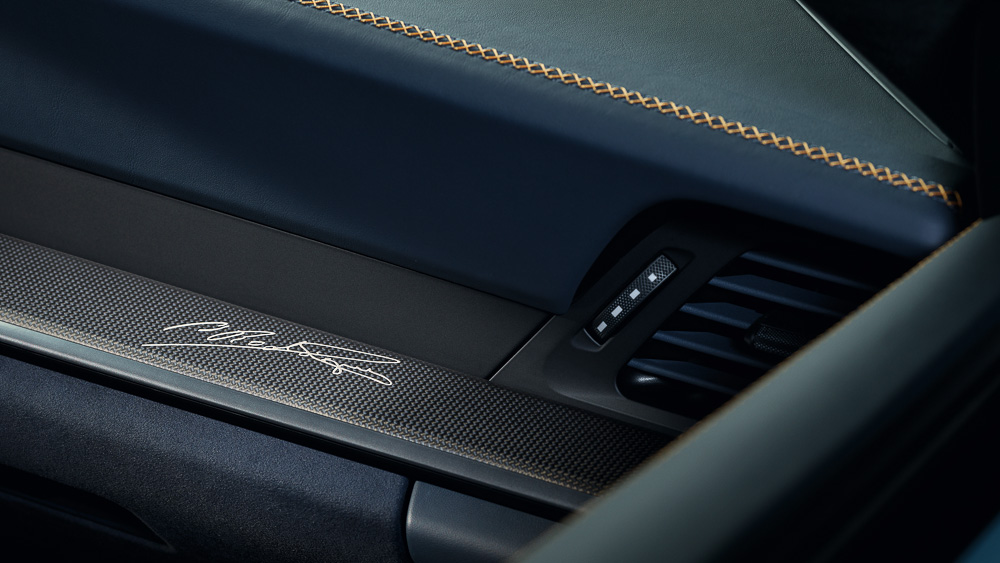 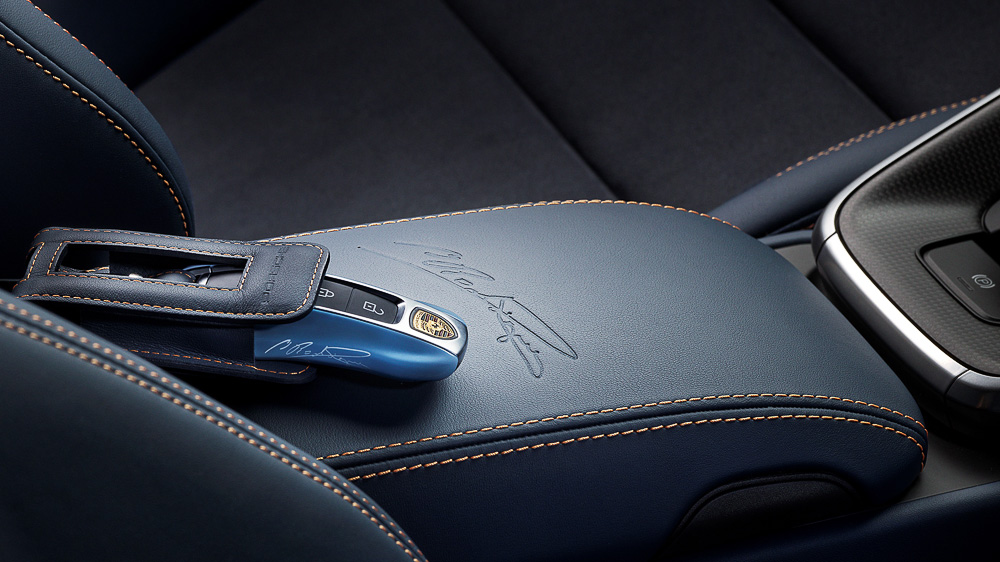 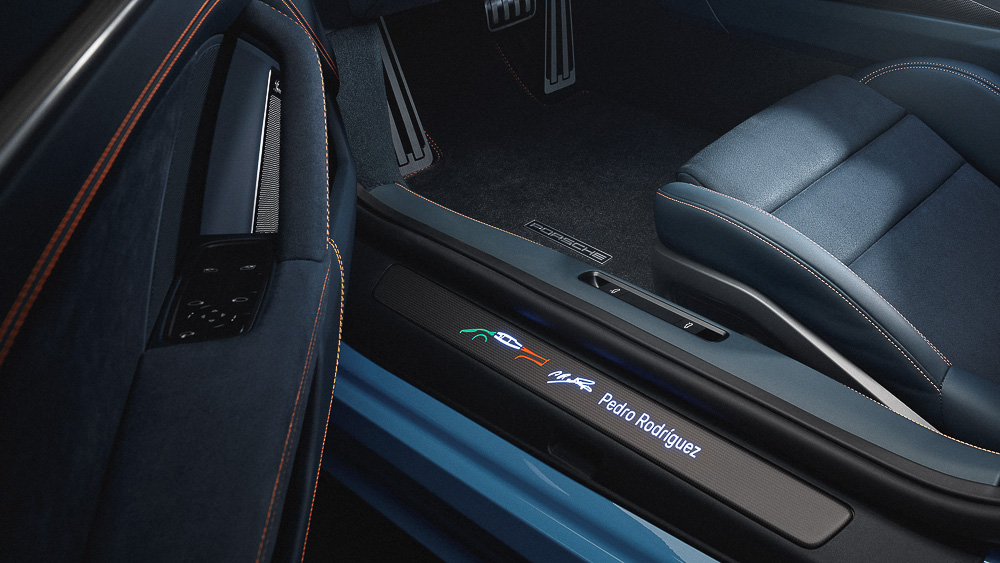 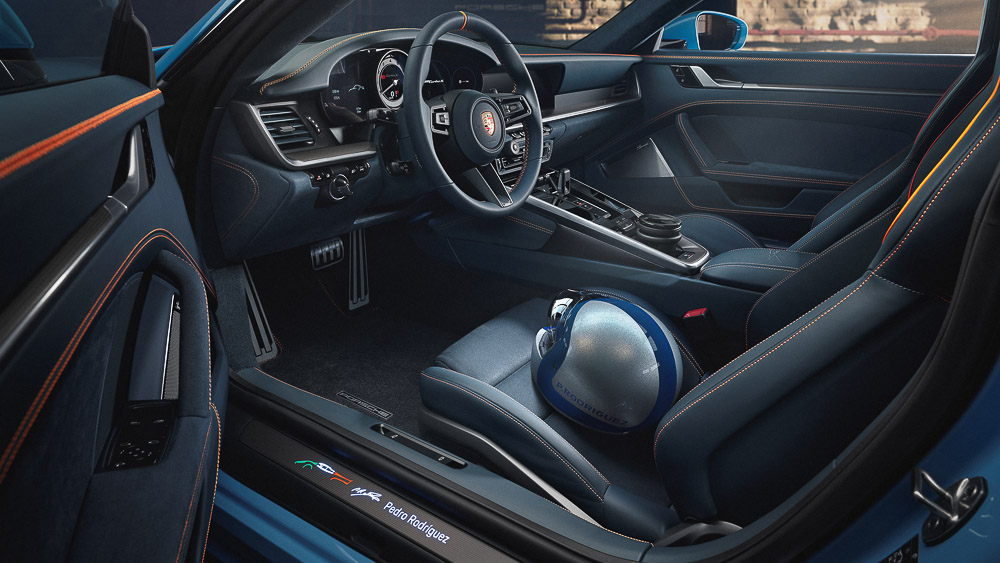 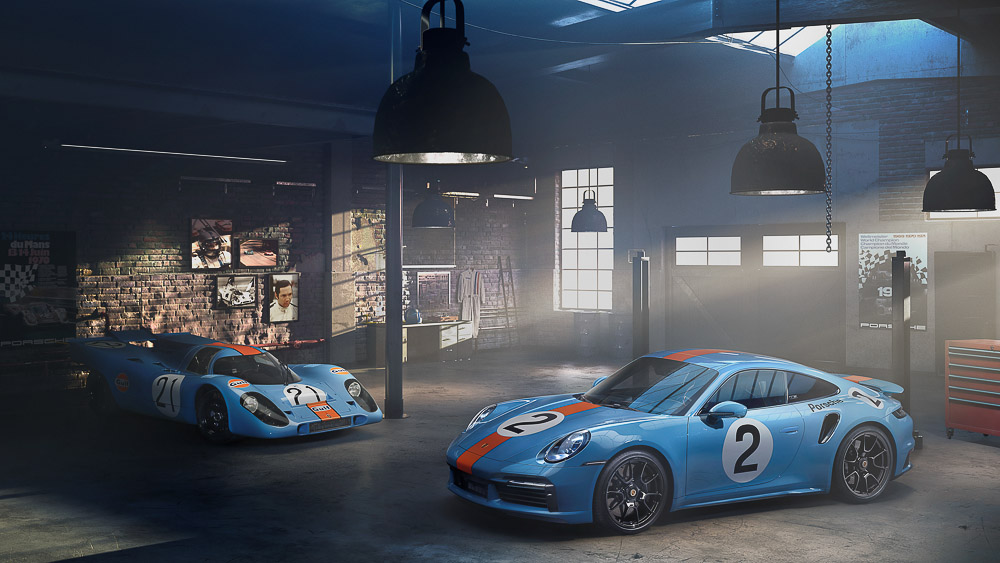 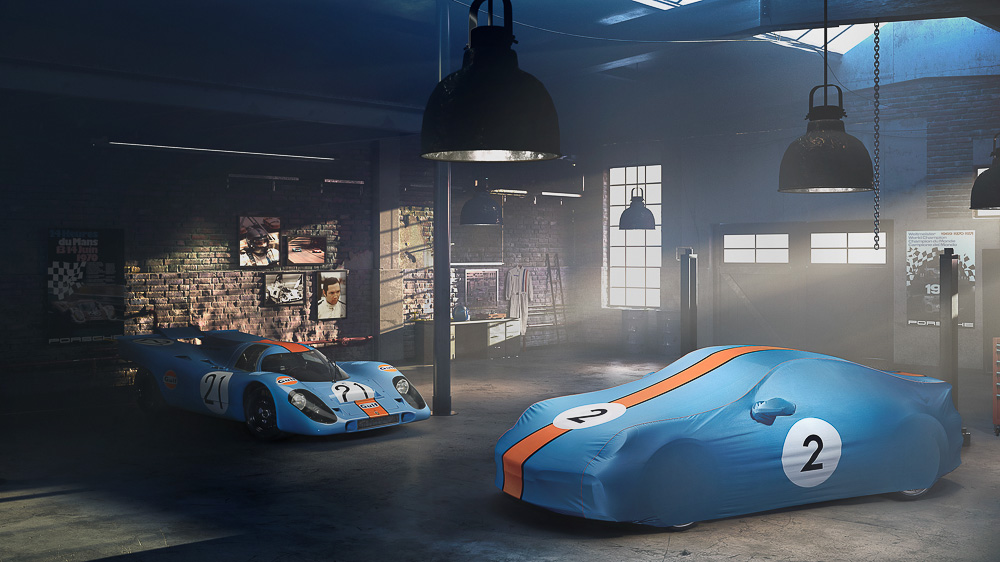 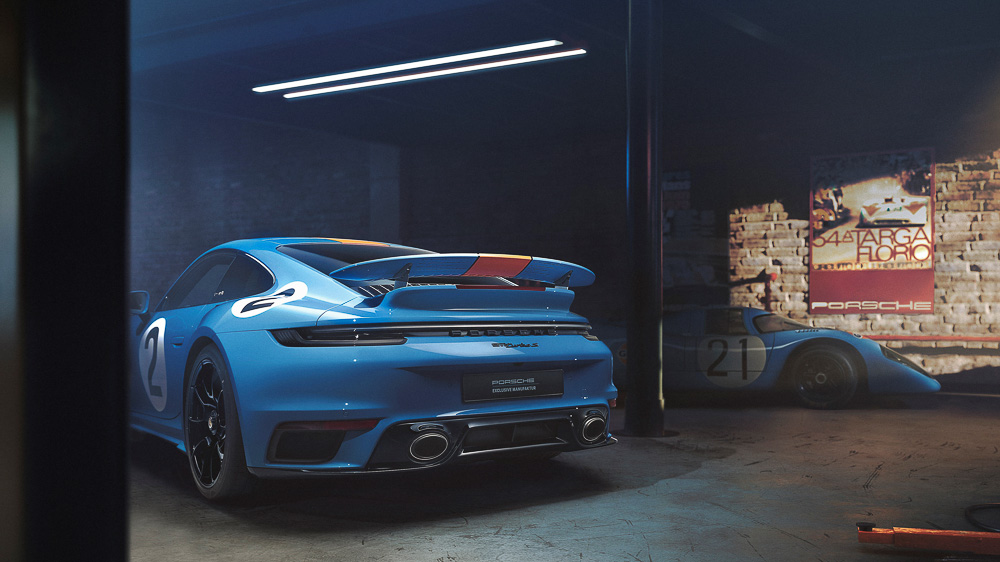 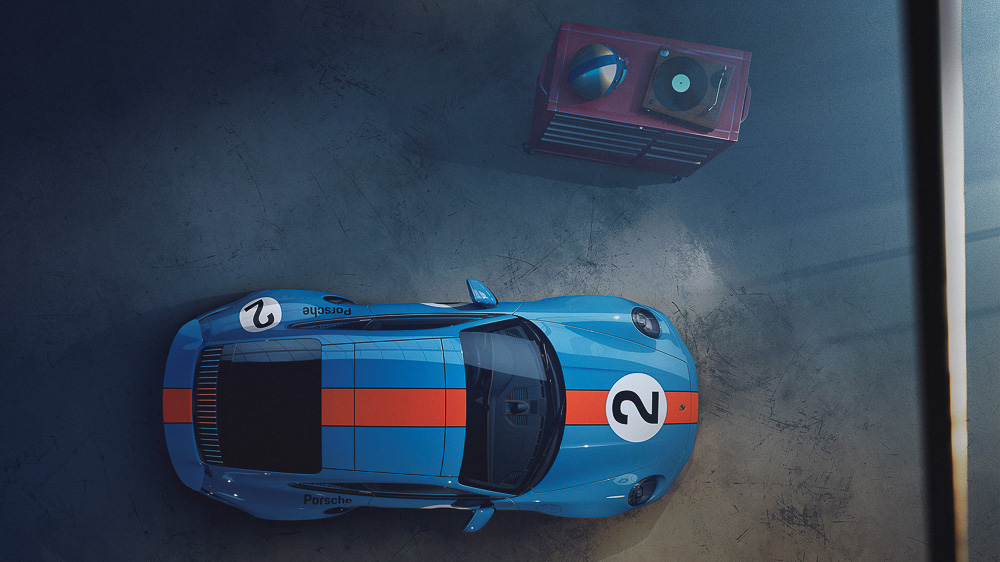