Gijs van Lennep is one of the most legendary racing drivers in Dutch motorsport history. He has always had a close relationship with the Porsche brand. Porsche Netherlands now honors this national legend with a unique Porsche 911 Carrera S. One of the most striking features of this one-off: the fingerprint of the former Porsche factory driver who applied Porsche Exclusive Manufaktur to the front bonnet.

Gijs van Lennep (78) looks back on a career as unique as it is versatile. The man who once started at Zandvoort in a Volkswagen Beetle reached the absolute world top on the various national and international circuits. Van Lennep has won the 24 Hours of Le Mans twice, scored points in Formula 1. He became European champion in Formula 5000, and won the last Targa Florio, the mythical road race in Sicily. No wonder that many consider Van Lennep the  ‘Best Dutch racing driver of the twentieth century’. A Dutch professional jury even awarded him with this title in 1999.

Porsche ran like a thread through the career of the driver from Blaricum. He drove many of the brand’s illustrious racers. Such as the Porsche 906 Carrera 6 with which Van Lennep made his international breakthrough in 1966. He drove many touring car races in the primal Porsche 911. He was also at the time when motor racing was a dangerous game to be found behind the wheel of the Porsche 908/02.  Van Lennep drove the Porsche 911 Carrera RSR Turbo and the Porsche 936. Of course, the Porsche 917 played a prominent role in his career. No one drove more races with this iconic racing car than Gijs van Lennep. Porsche Netherlands now has the privilege to honor Van Lennep’s unique racing talent and to highlight his enormous contribution to Dutch motorsport with this unique Porsche 911 Carrera S.

Belated introduction due to COVID-19

Originally the intention was to bring the special Gijs van Lennep version to the limelight during the tenth edition of the Gijs van Lennep Legend in August. Because of COVID-19, the jubilee edition, where rally drivers and tour riders meet and raise as much money as possible for charity, had to be postponed until August 22, 2021. Porsche Ambassador Van Lennep is already looking forward to present ‘his’ 911 Carrera S act. “That’s the year that fifty years ago I first won the 24 Hours of Le Mans in a Porsche 917, with a distance record that would last until 2010. I find it extraordinary that Porsche Netherlands is honoring me with this unique Porshe 911. It doesn’t get much more personal than a car with your fingerprint”.

Most striking is the fingerprint of Gijs van Lennep on the front cover of this one-off Porsche 911. This was applied using an innovative direct printing paint process developed by Porsche Exclusive Manufaktur. This now makes it possible to apply graphic elements such as the fingerprint of the Dutch driver with the highest quality to painted body parts. The completely new paint technology is comparable to that of an inkjet printer. The print head can apply lacquer to three-dimensional surfaces without ‘overspray’, allowing Porsche Exclusive Manufaktur to create complex shapes such as a fingerprint flawlessly. The option has been available since this year.

On the outside, the color Lava orange stands out. A clear reference to the time that Van Lennep belonged to the Racing Team Holland. Famous drivers such as Ben Pon, Rob Slotemaker, Henk van Zalinge and Carel Godin de Beaufort made part of the team that raced mainly in Porsches. Furthermore, the car is equipped with Exclusive rear lights, a lightweight carbon roof, and a striking SportDesign package 911 Turbo in high gloss black including an Aerokit rear spoiler.

Besides the already very extensive standard equipment of the Porsche 911 Carrera S, this tribute to Gijs van Lennep gets many unique and exclusive extras. For example, the signature of the former factory driver appears inside the illuminated boarding lists. Furthermore, the special Porsche 911 Carrera S is equipped with adaptive sports seats Plus that are finished with Sport-Tex fabric. Throughout the interior, different stitching in Lava orange and carbon elements predominate.

The Gijs van Lennep version of the Porsche 911 also has various details in Race-Tex, a high-quality microfibre material that is partially made from recycled polyester fibers. The GT sports steering wheel with matte carbon inlay including steering wheel heating. The headliner is covered with this material too.

The Porsche 911 Carrera S is powered by a 3.0-liter six-cylinder boxer engine with two turbos, producing 331 kW/450 hp and 530 Nm. This power is transmitted to the rear wheels via an 8-stage PDK. The car reaches a peak of 308 km/h and accelerates from 0 to 100 km/h in 3.5 seconds. Last year, Pon Porsche Import introduced a limited edition of the Ben Pon Porsche 911, to honor him as he passed away just some days before the revealing of the car. Honoring Porsche legends seems to be fashionable. Just last year did Porsche Belgium pay tribute to Jacky Ickx. They honored Mister Le Mans to celebrate his 75th anniversary with a Porsche 911 Carrera 4S ‘Belgian Legend Edition’. 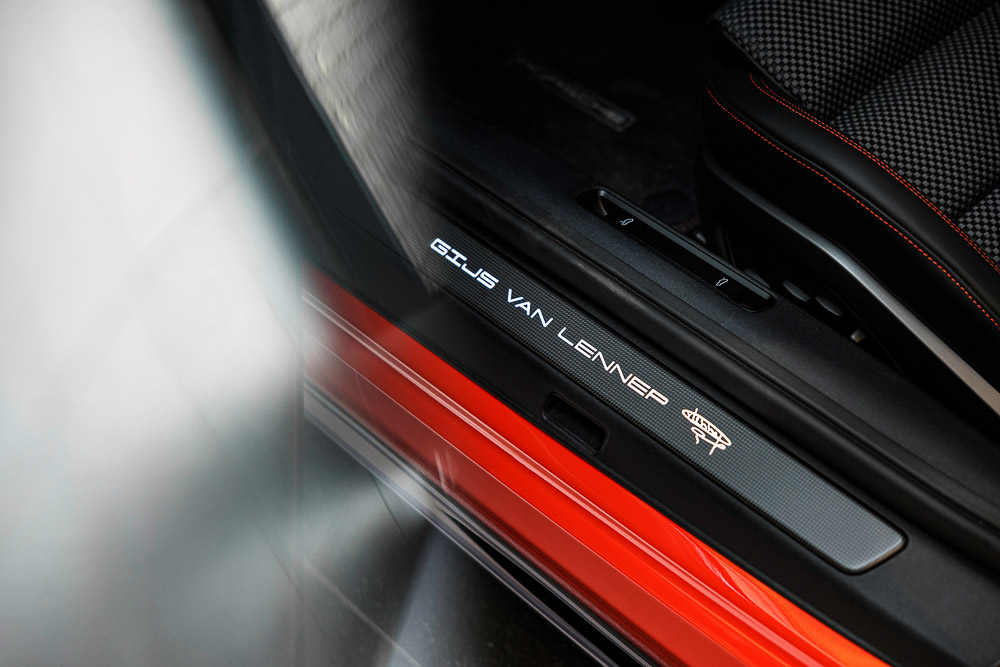 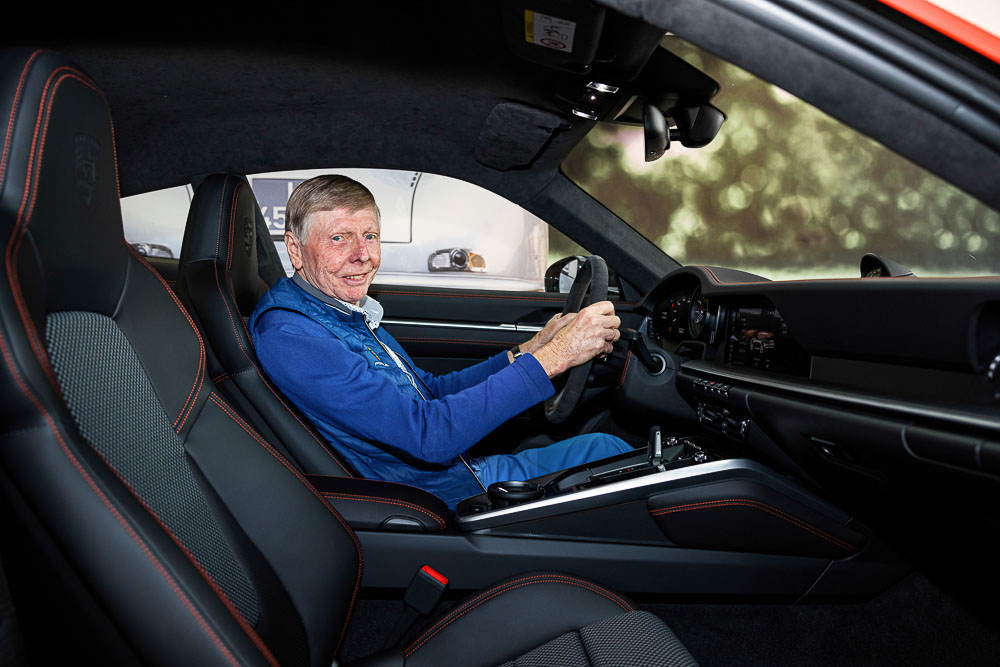 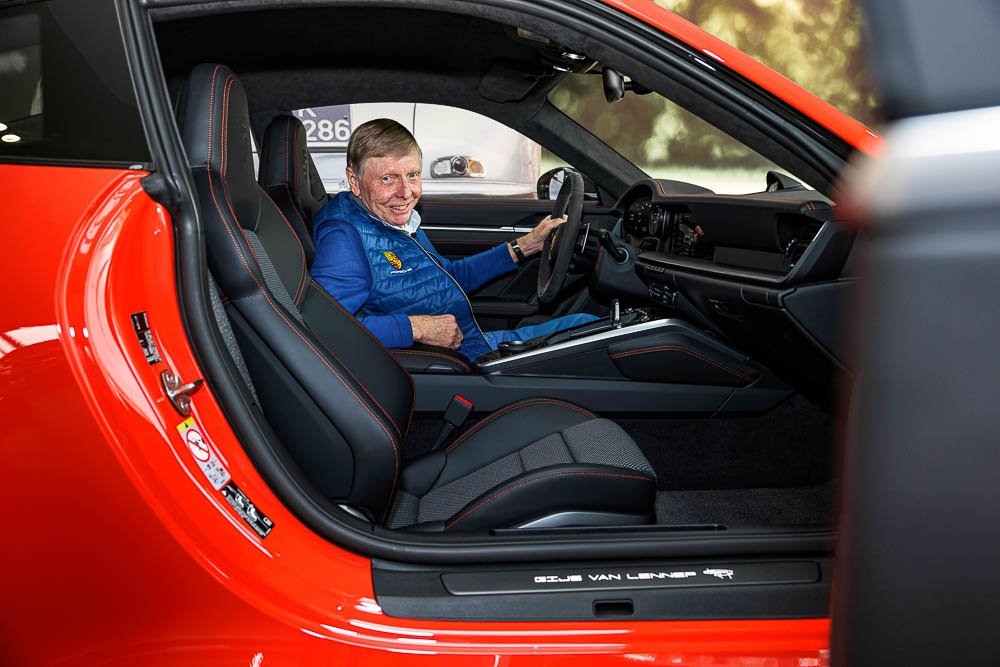 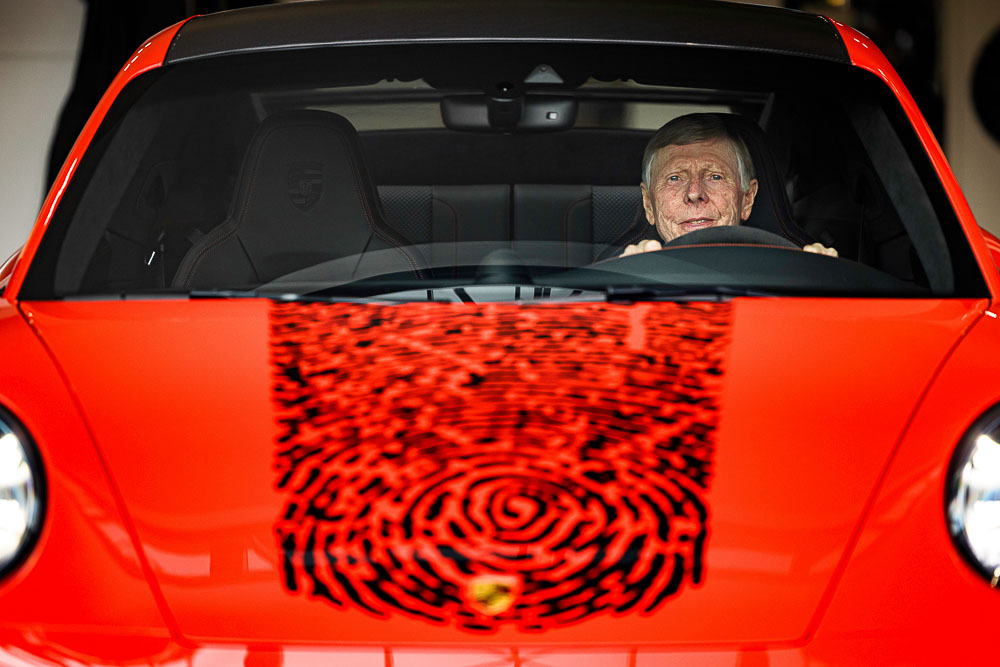 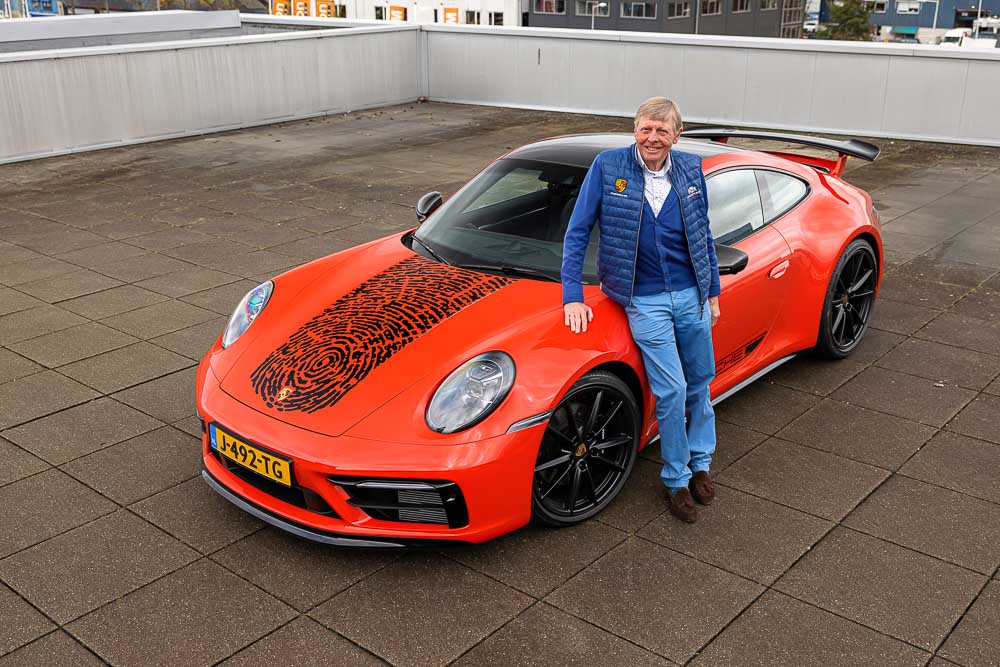 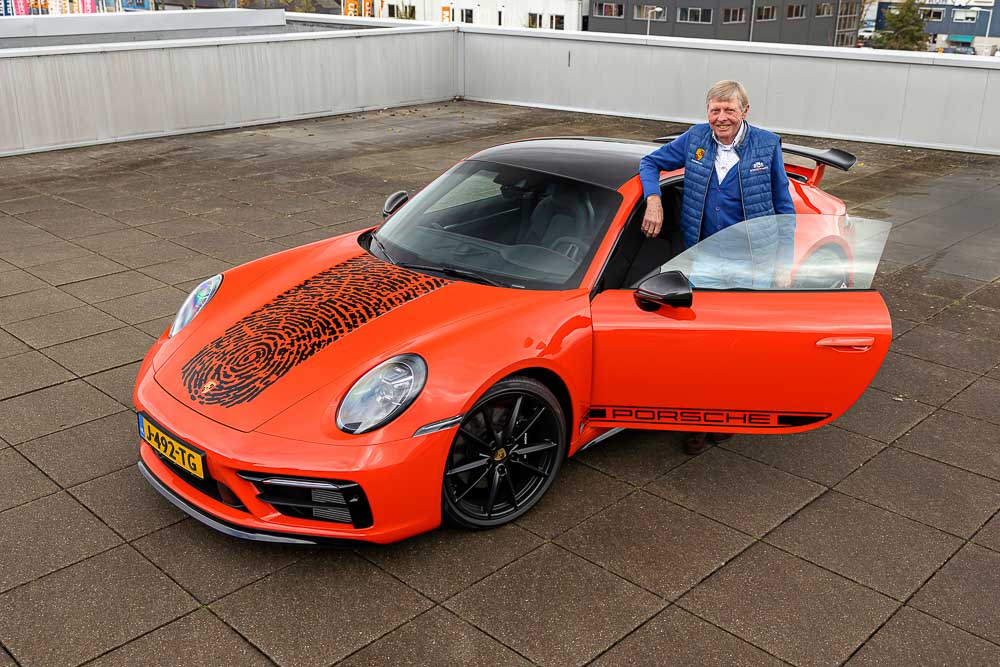 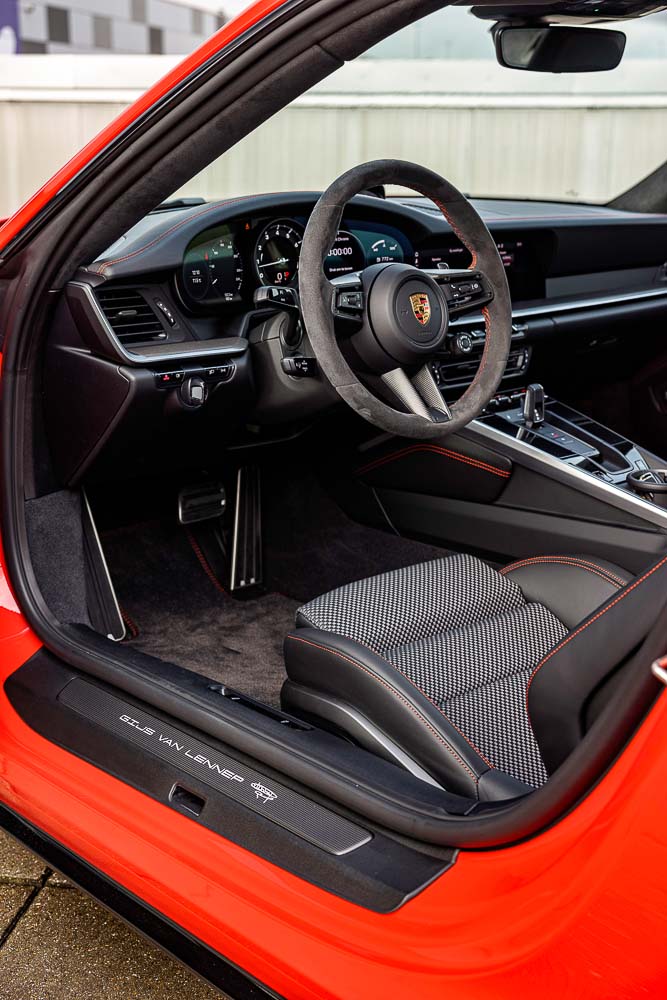 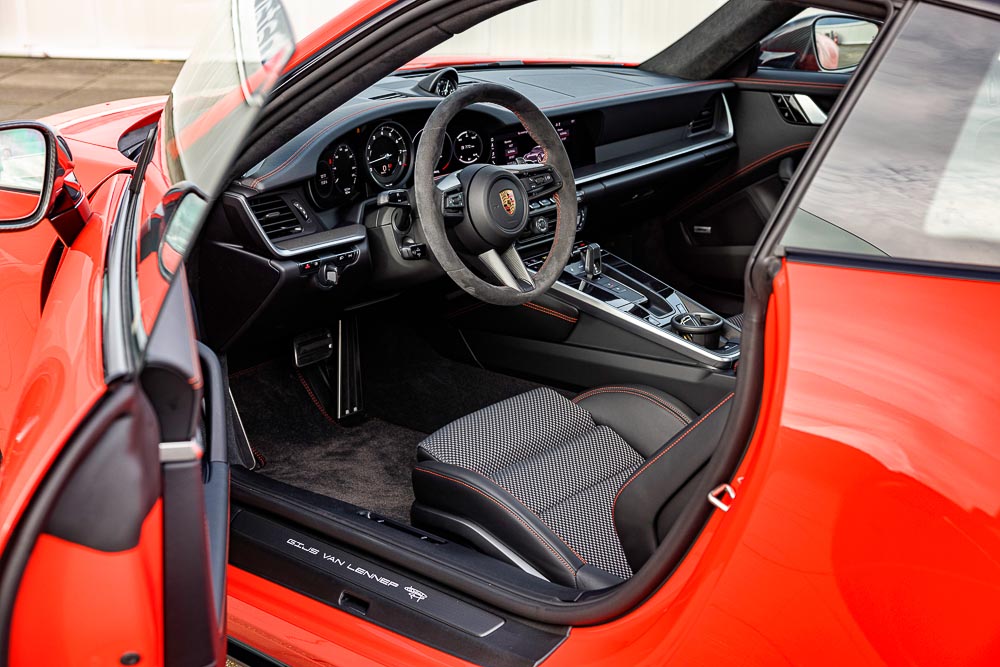 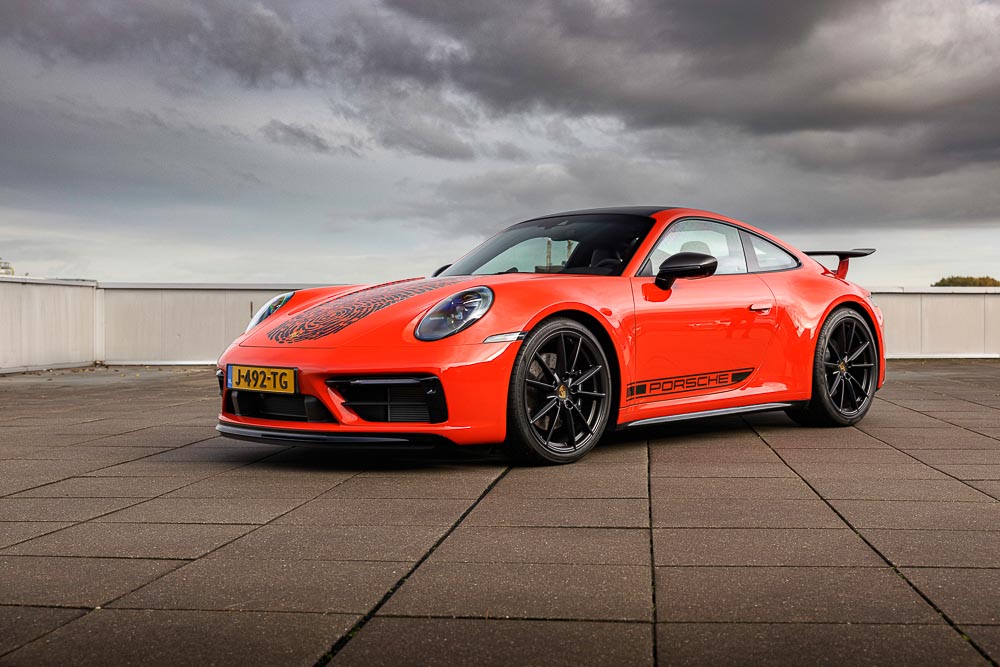 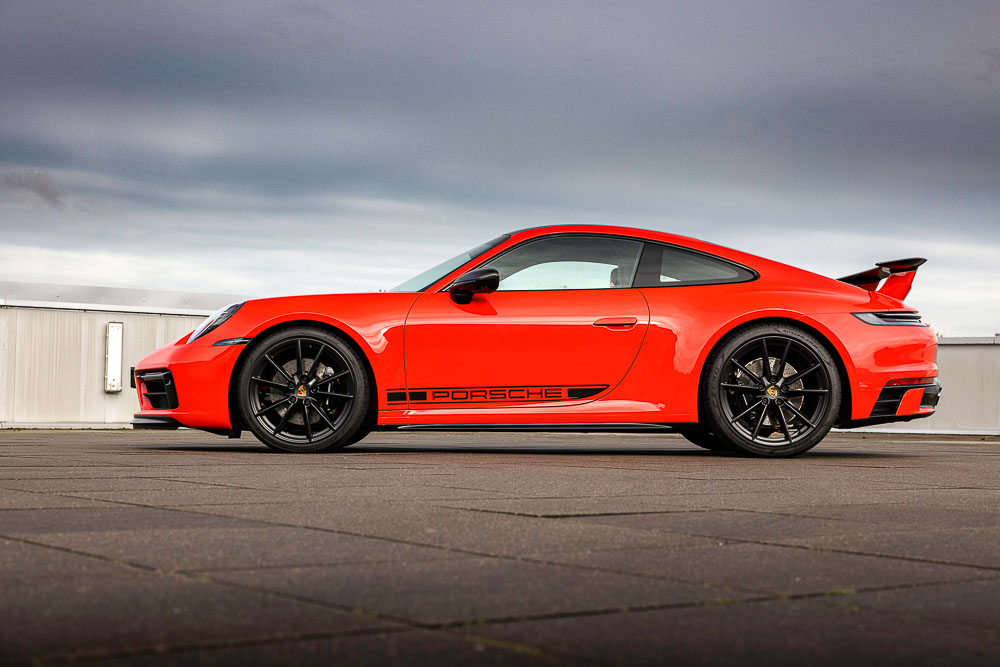 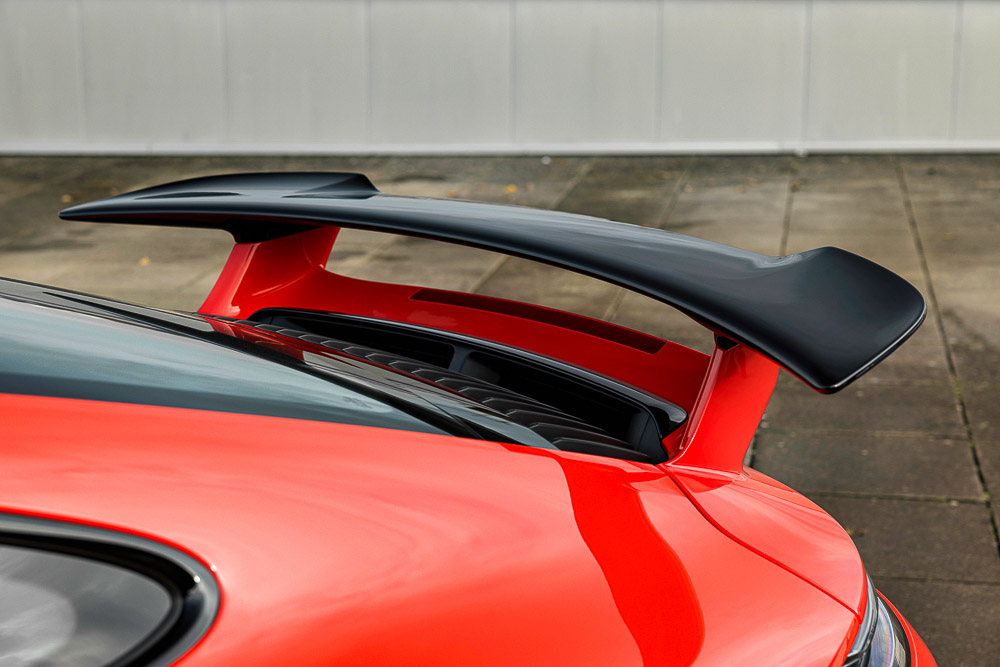 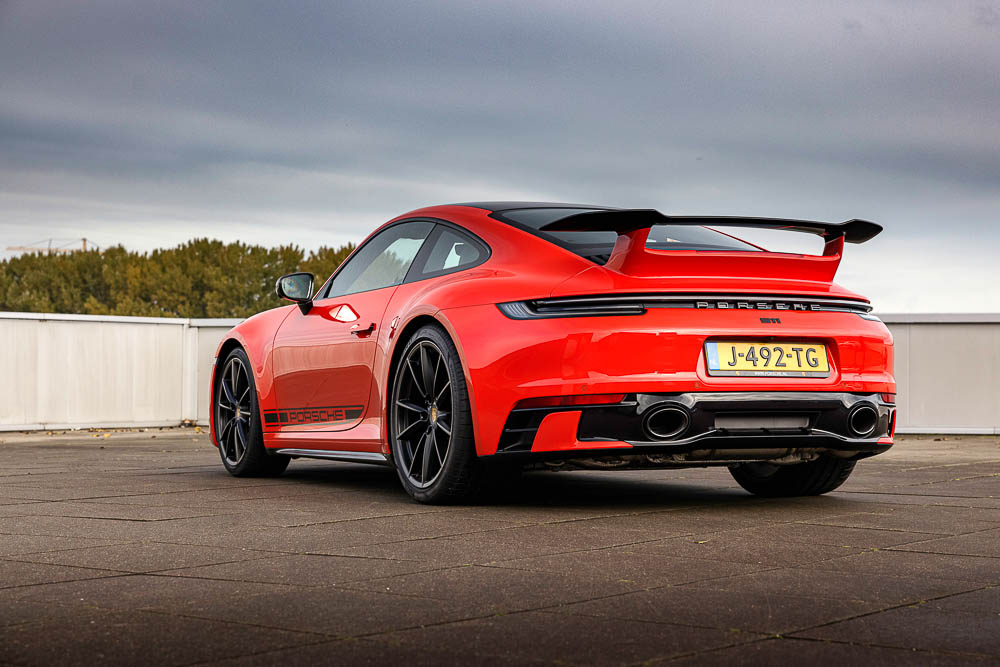 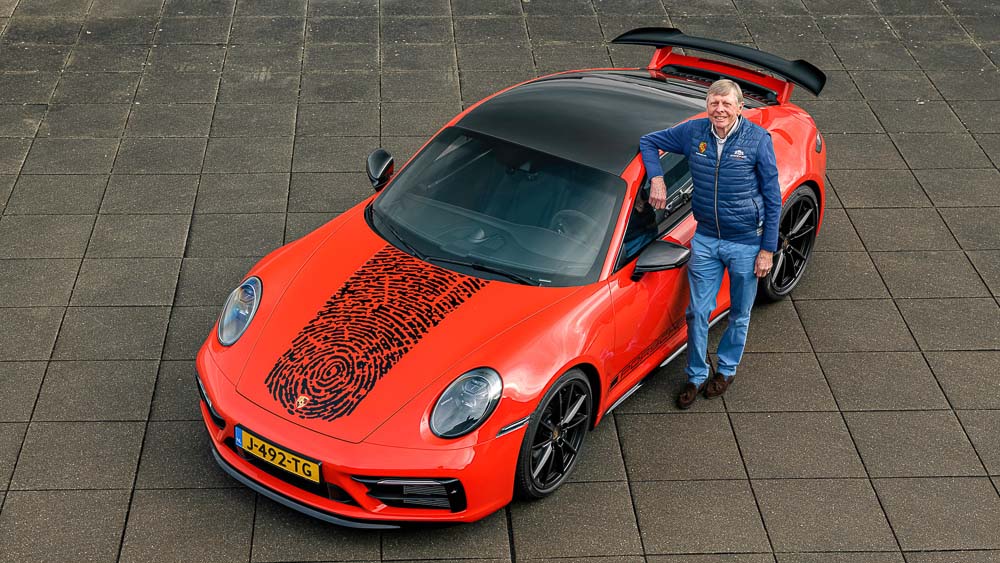 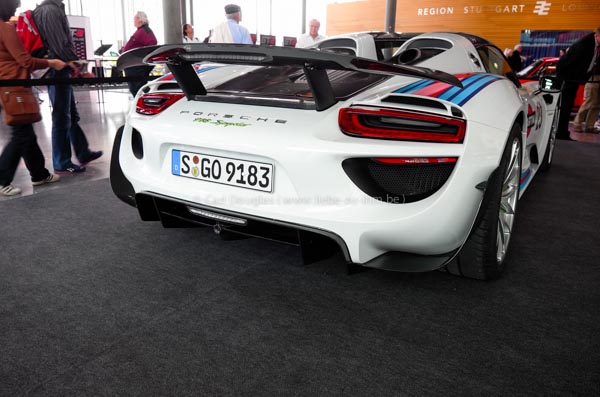