The Porsche GT Team will line up on the grid at the 24 Hours of Le Mans with race cars in special liveries. Distinctive decals will be affixed to the two ca. 510 hp Porsche 911 RSR with the starting numbers 91 and 92 from the FIA World Endurance Championship (WEC) to honour an early manufacturers’ world championship title. In recognition of this achievement in the fiercely competitive GTE-Pro class, the popular design of the cars was revamped: all red surfaces of the two Porsche 911 RSR racers will be finished in gold for the season finale at Le Mans, with the roof of both 911 RSR from the WEC emblazoned with the world champion logo. The pits of the Porsche GT Team will also reflect these colours.

The identical models from the IMSA WeatherTech SportsCar Championship compete bearing the design of the legendary Brumos team. The two Porsche 911 RSR flying the colours white, red and blue have already delighted fans at the first two rounds of the season at Daytona and Sebring. The American squad won the 24 Hours of Daytona in 1973, 1975, 1978 and 2009. Brumos Racing is indelibly linked to the name of Porsche’s current brand ambassador, Hurley Haywood. After scoring three overall victories at Le Mans, the American is considered one of the most successful drivers at the 24-hour marathon. Haywood will act as Grand Marshal at the long-distance classic in France on 15/16 June. Hollywood star Patrick Dempsey has immortalised the life of the charismatic racing driver on film. Since March 26th, the documentary “Hurley” can be viewed on numerous streaming services.

“The gold paintwork on the two 911 RSR racers from the WEC symbolises the early win of the world title for manufacturers, which is something we’re very proud of,” says Porsche’s vice president of motorsport Fritz Enzinger. “The Brumos design is one of the most famous and popular vehicle liveries in motor racing. This year this finish celebrates its Le Mans debut. In 2018, our cars sported a special design and yielded us a brilliant double victory at Le Mans. We hope to achieve a similar result this year.”

Disappointment despite a podium spot for Porsche at the Le Mans 24H. 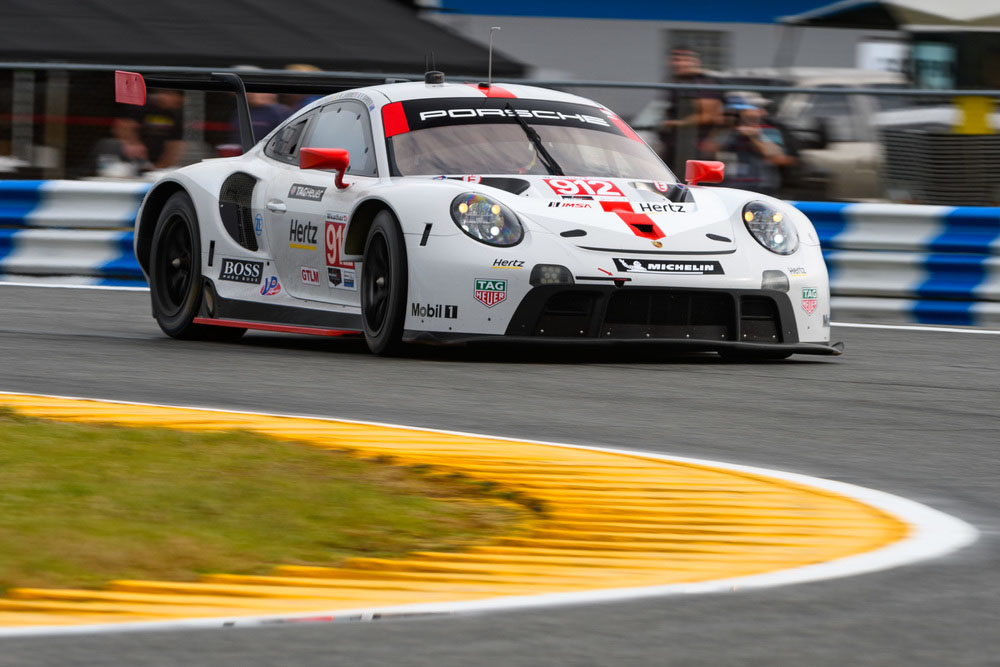