Paul Frère was born in Le Havre, France. His father was an official in the Belgian government and as he moved from one post to another, the family lived in Paris, Brussels, Berlin and Vienna.

Frère started racing motorcycles after World War II, making his debut in the first race held in Belgium after hostilities ceased in 1947. He won his class with a pre-war 500-cc Triumph Speed Twin.

He raced cars for the first time the following year in the Spa 24 Hour race driving a friend’s 1938 ex-Le Mans MG PB Special and in 1950 he won his class in the Spa production car races driving an 850cc Dyna Panhard.
In 1951 he won his class again, still driving the Panhard. At the time Frère was working as the service manager for the Belgium Jaguar importer and so when one of their customers who had entered his car into the sports car race at the circuit complained that is wasn’t as quick as he had expected, he took the car out for 3 laps and promptly put in the fastest lap of the day.

As a result of his quick laps the year before, when Oldsmobile decided to enter a Rocket 88 in the event in 1952, they signed Frère to drive. He won, but only just, coasting across the line with an empty fuel tank. He had been told by the Belgian Automobile Club that is he could find a car, they would give him an entry in his home Grand Prix.

He went to John Heath at HWM but John didn’t have a drive available. Frère had helped him secure a hard to find engine part some years earlier when he was living in Paris, so when Heath found he needed a replacement for Peter Collins at the Grand Prix des Frontières in Belgium he called Paul. Frère won on the last lap and ended up retaining the drive for the Belgian Grand Prix. In a very wet race, Paul finished 5th, a couple of laps down on Alberto Ascari, the winner. Paul also drove in the German and Dutch Grand Prix for HWM that year, but went out with mechanical failure both times.

He drove for HWM again in 1953 finishing 11th in Belgium Grand Prix and failing to finish in Swiss. However he did finished 2nd in the Eifelrennen at the Nürburgring in the rain.

He made his debut at Le Mans that year driving a 1500cc Porsche Spyder to 15th place and drove a Chrysler in the Mille Miglia. Despite loosing his brakes by half distance, he still managed to win his class by a margin of some 2 1/2 hours.
The following year he was invited to test for Mercedes-Benz with a view to driving for them at Le Mans. Unfortunately the cars were not ready in time and he ended up sharing an Aston Martin with Carroll Shelby.

He had also accepted an invitation to race for Gordini for some Grand Prix. In Belgium he retired with engine failure, and in France he retired when the rear axle broke near the finish having been in fifth place. At the German GP at the Nürburgring. He had qualified considerably quicker than Behra but in the race his front wheel flew off fortunately without serious consequences. After that he refused to drive for them again.

Aston invited him back in 1955 only to have Mercedes call with an invitation to drive the 300SLR. Already committed, Mercedes hired Pierre Levegh, whose race ended in the the worst accident this sport has ever seen, with more than 80 dead. Frère finished 2nd driving with Peter Collins.
He drove a Ferrari to 4th place in the Belgian Grand Prix, but then broke his leg in the Swedish Grand Prix sports car race when he crashed the Ferrari Monza he was driving.

In 1956 he was part of the Jaguar sportscar team. He went to Spa for the Belgian GP as a member of the press, but the day before the race he was offered a drive by Ferrari. He finished 2nd in the Lancia-Ferrari behind team mate, Peter Collins,and was invited by the Scuderia to move to Maranello to be their test driver and to take charge of race car preparation. He declined.

A consistent competitor at Le Mans, in 1956 he drove a factory D-Type Jaguar but crashed on only the second lap. In 1957 he finished 4th driving a privately entered D-Type and was 4th again in 1958, driving a 1.5-litre Porsche with Edgar Barth. 2nd in 1959 in an Aston Martin with Maurice Trintignant was followed in 1960 with victory.

Driving with fellow Belgian, Olivier Gendebien, they drove one of four factory Ferrari 250TRs, leading for more than 22 hours before taking the chequered flag. That year he also won the Formula Libre South African Grand Prix in a Cooper and the sportscar Grand Prix of Spa in a Porsche.
He retired from racing at 43 and devoted himself to writing full-time, becoming one of the world’s leading motoring journalists.

One thought on “Paul Frère” 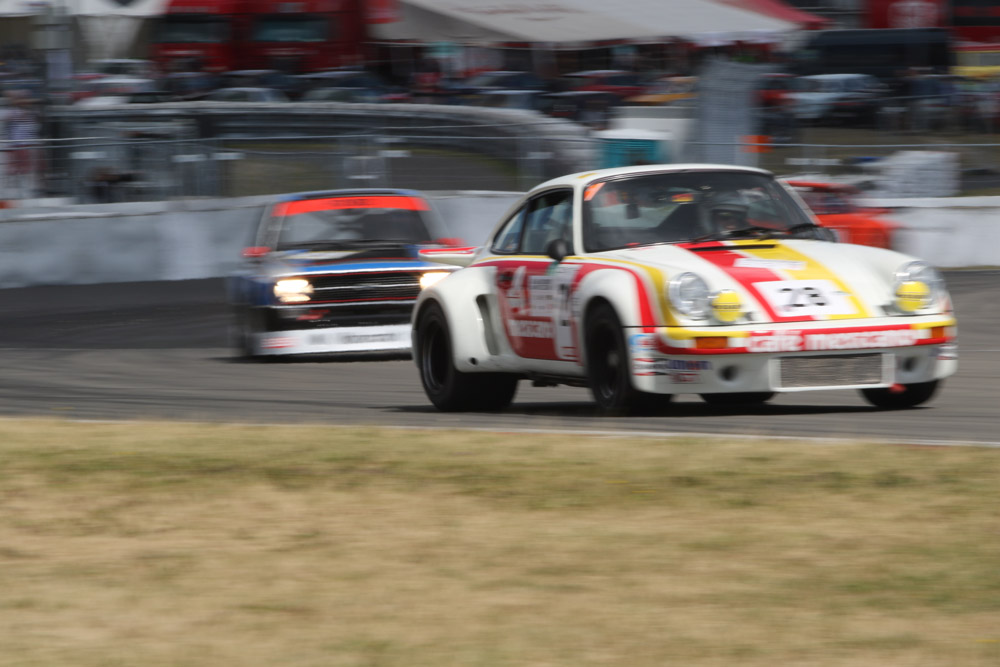