The standard 7-speed dual-clutch transmission (PDK) fitted to the car now uses all seven forward gears, rather than six. All gears feature shorter ratios than in the previous model. Depending on the track and series-specific regulations, the new 718 Cayman GT4 RS Clubsport can achieve lap times that are over two per cent quicker than the previous model. The homologated vehicle is a track-ready ex-factory and can be used in SRO racing series around the world without further modifications. The starting price of the vehicle is 196.000 Euro (229.000 Dollar), not including specific tax.

“We have incorporated our experience of the last three years of running the previous GT4 Clubsport as well as customer wishes into the development of the new car,“ said Michael Dreiser, Manager of Sales and Distribution at Porsche Motorsport. “Faster lap times combined with a further improvement in driveability offer our customers a competitive product for the upcoming racing seasons in GT4 class racing competitions around the world.“ Porsche began offering the Cayman GT4 Clubsport of the 981 generation in 2016, entering into this new customer racing format early with a competitive car. A total of 421 units were built prior to 2018. The next-generation model, which was based on the 718 Cayman GT4, debuted in 2019. It was also an extremely successful car, with around 500 units produced to date. One of the reasons for the strong demand for these vehicles is due to the low running costs. The use of well-proven series production technology combined with racing-specific components significantly reduces the costs for customer teams.

The 718 Cayman GT4 RS Clubsport continues this tradition and offers a further improvement in terms of its competitiveness. The 500 PS 4.0 litre six-cylinder boxer engine taken directly from the current 911 GT3 Cup racing car is almost 18 per cent more powerful than the 3.8-litre engine that was used in the previous model. Thanks to an optimised air intake, maximum power is achieved at 8,300 rpm – 800 rpm higher than the previous engine. The new engine revs up to 9,000 rpm. It develops 465 Newton metres (Nm) at 6,000 rpm instead of the previous 425 Nm at 6,600 rpm. The result is a much wider usable speed band, which makes driving the car much easier for pro-racers and amateur drivers alike.

Modifications to the chassis have also improved the handling of the 718 Cayman GT4 RS Clubsport. The damper technology has been revised from the ground up in order to achieve optimised vehicle responsiveness and a further improvement in body control. This has had a significant impact on the overall performance of the vehicle and handling. Upgrades include the use of two-way adjustable shock absorbers with improved characteristics, in addition to adjustable sword-type anti-roll bars front and rear. Vehicle height, camber and toe are also adjustable. Furthermore, three different spring rates for front and rear axles are now available. Special NACA ducts in the bonnet are designed to direct the airflow more efficiently to the large racing braking system fitted with 380-millimetre steel brake discs. The Porsche Stability Management System (PSM) is designed specifically for motorsports and includes a switch for traction control (TC), ABS and an updated stability control system.

Excellent aerodynamics ensure that the precise and controllable handling of the 718 Cayman GT4 RS Clubsport remains well-balanced even in fast curves. Front dive planes and an extended front spoiler lip increase downforce at the front axle. Wheel arch vents in the wings inspired by the 911 GT3 R and air curtains specifically designed to calm the air turbulence around the front wheels, while the fully enclosed underbody optimises airflow to the diffusor at the rear of the car. The swan neck rear wing has now been given a 20 millimetre long Gurney flap and an adjustment range extended by two additional stages.

The previous 718 Cayman GT4 Clubsport was the first-ever series production race car to use body parts made of renewable natural-fibre composite material. In the case of the new GT4 RS Clubsport, even more, extensive use of this material is made in the vehicle as a whole. In addition to the doors and the rear wing, the bonnet, the wings, the aerodynamic components at the front end and the steering wheel are now made of this material. The use of this flax-based fibre as an alternative to carbon fibre composite material can now be tested in motorsports for its use in road cars. Porsche has been using motorsports as a testbed for technology, processes and materials potentially capable of being used in road cars for over 70 years now.

The 718 Cayman GT4 RS Clubsport is equipped to meet all the prerequisites allowing it to compete in racing events directly from the factory. This begins with the welded-in roll cage and the fore and aft adjustable Recaro racing seat and extends from 2023 compliant six-point racing safety harnesses and safety nets to the fire extinguisher system and the built-in air jack system with three jacks. The new safety foam on the driver’s side meets the international requirements of the SRO racing series. The FT3 safety fuel cell can take up to 115 litres of fuel, making it suitable for endurance racing. Additionally, Porsche offers two different exhaust systems, allowing the GT4 RS Clubsport to compete at tracks with stricter noise limits. The vehicle is also prepared for the later addition of homologated headlights or openings in the bonnet for fast refuelling to enable the car to be converted quickly for nighttime endurance racing. 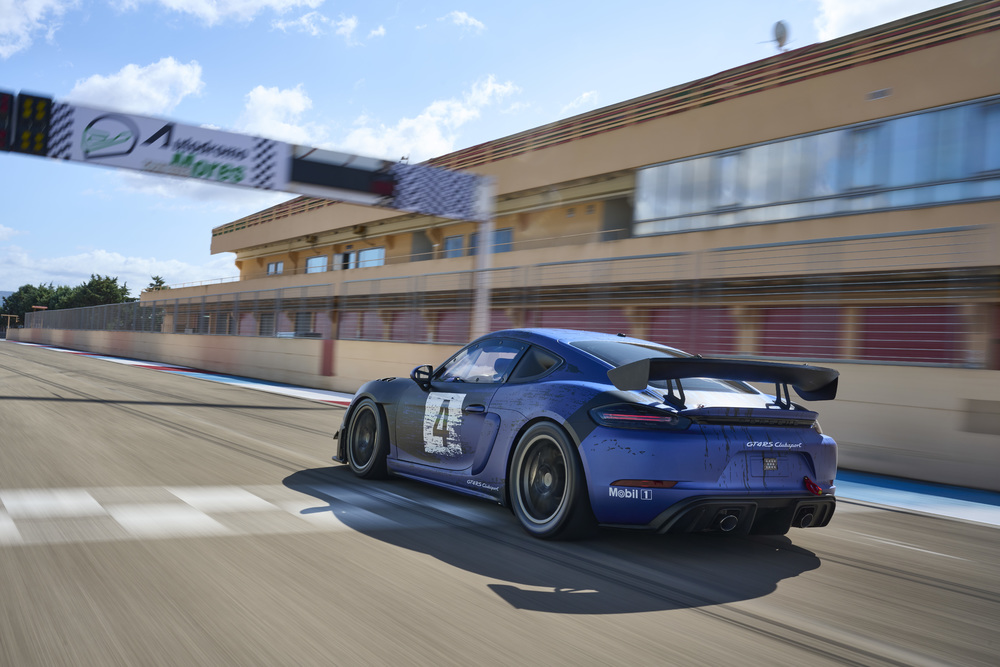 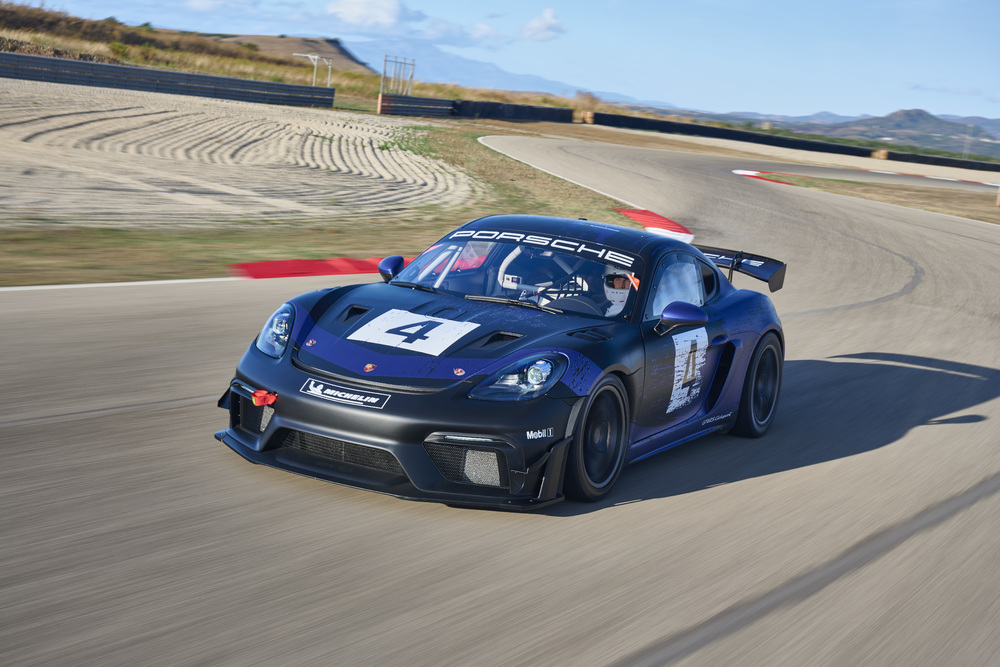 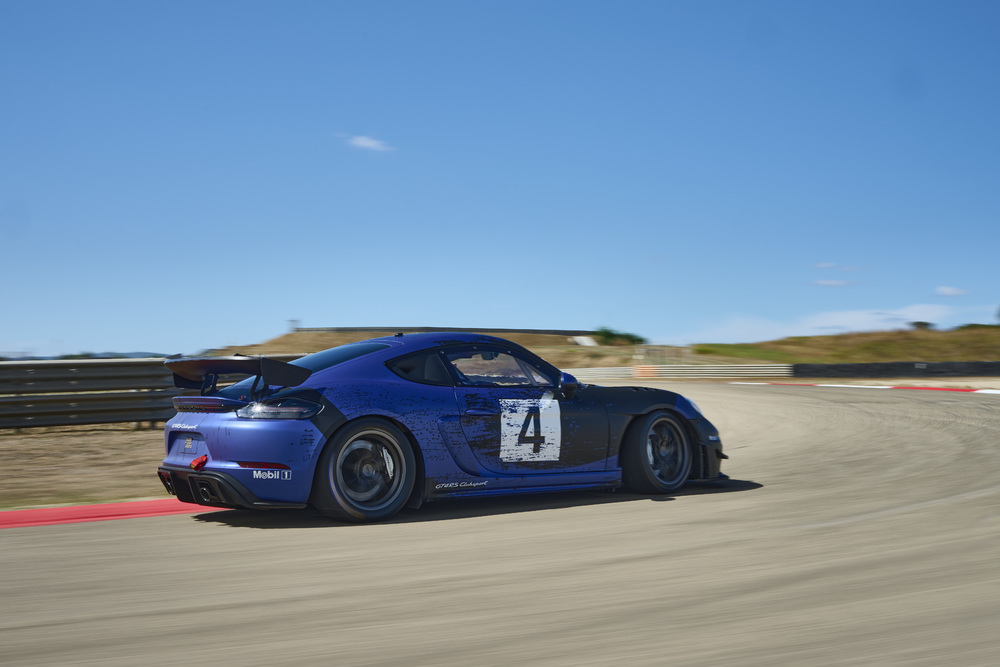 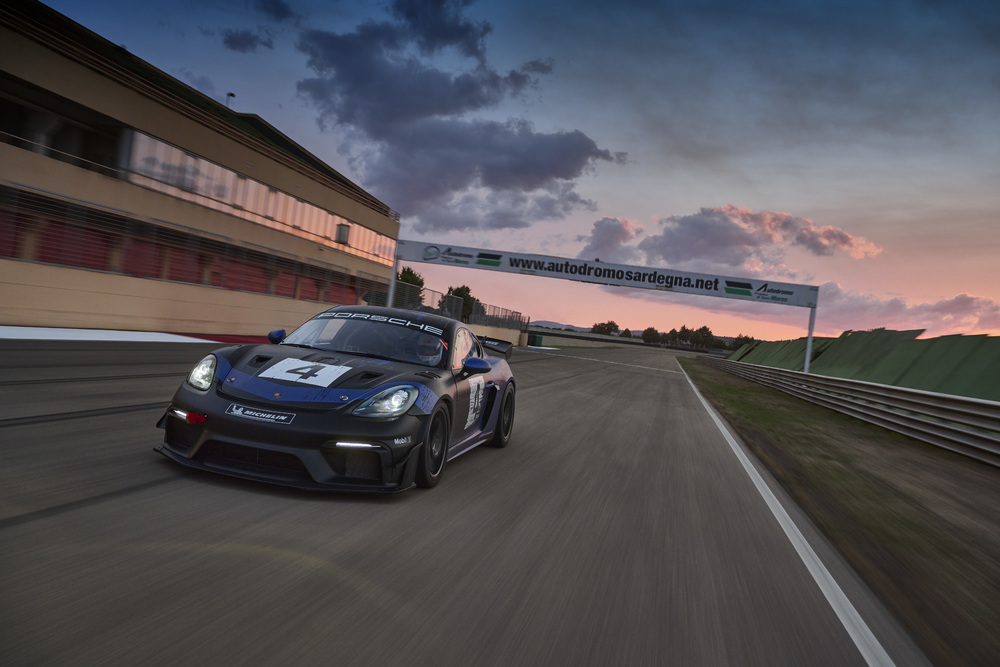 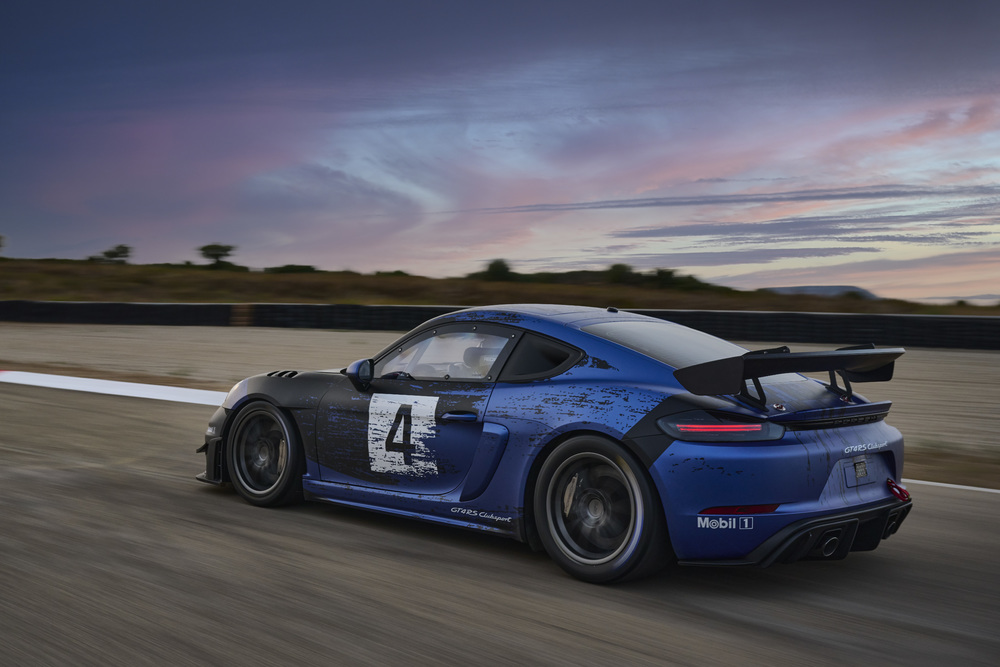 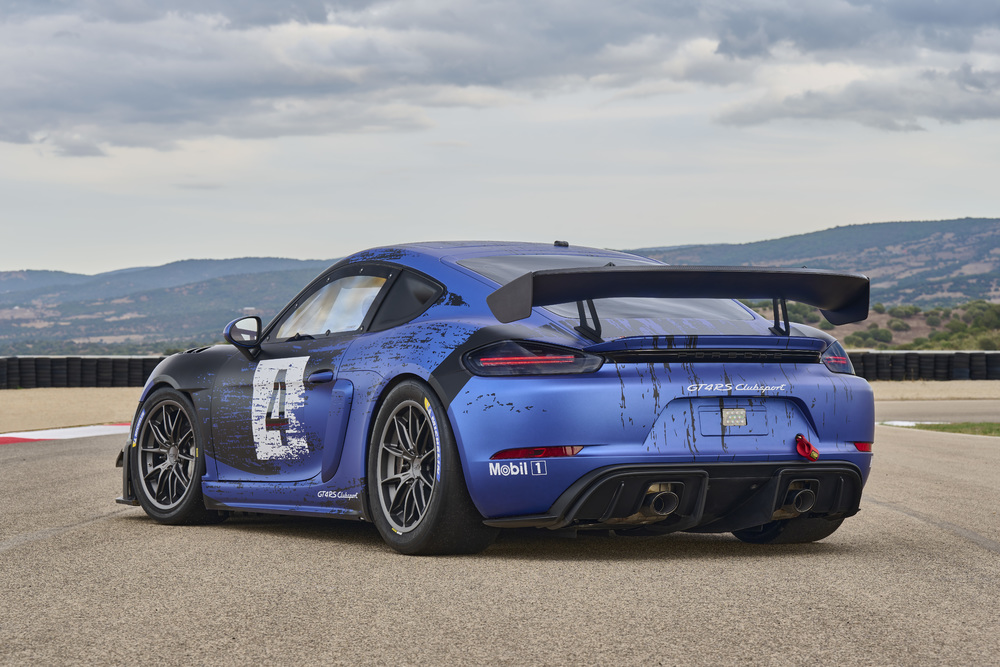 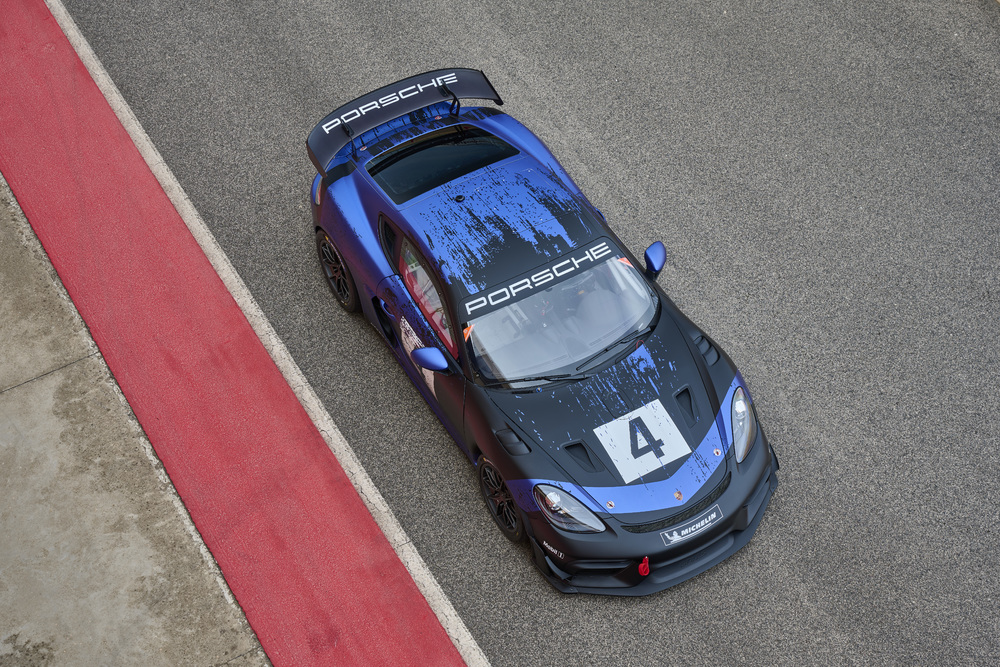 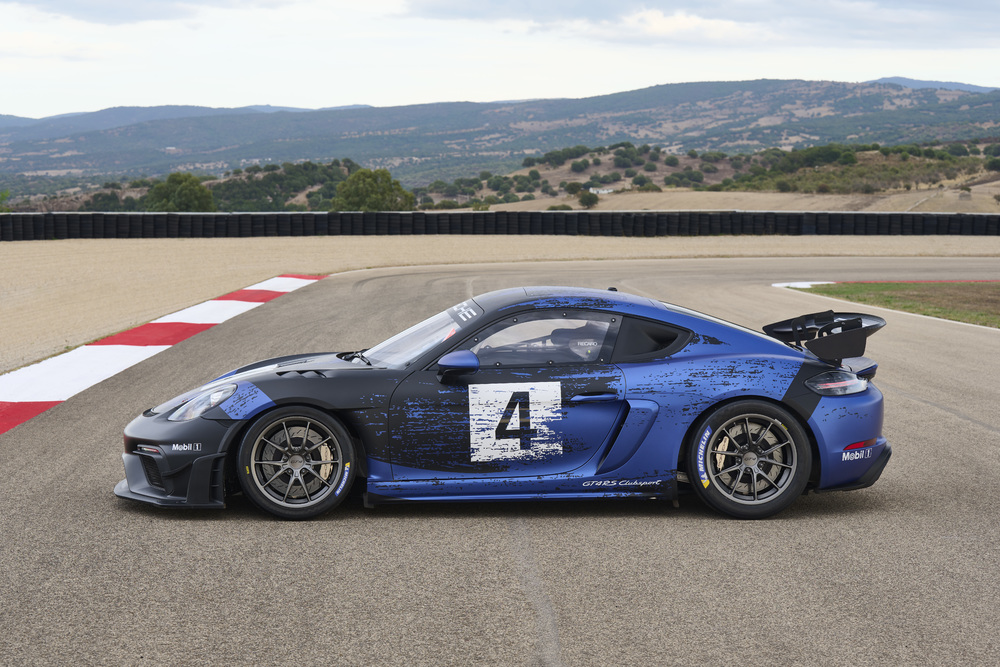 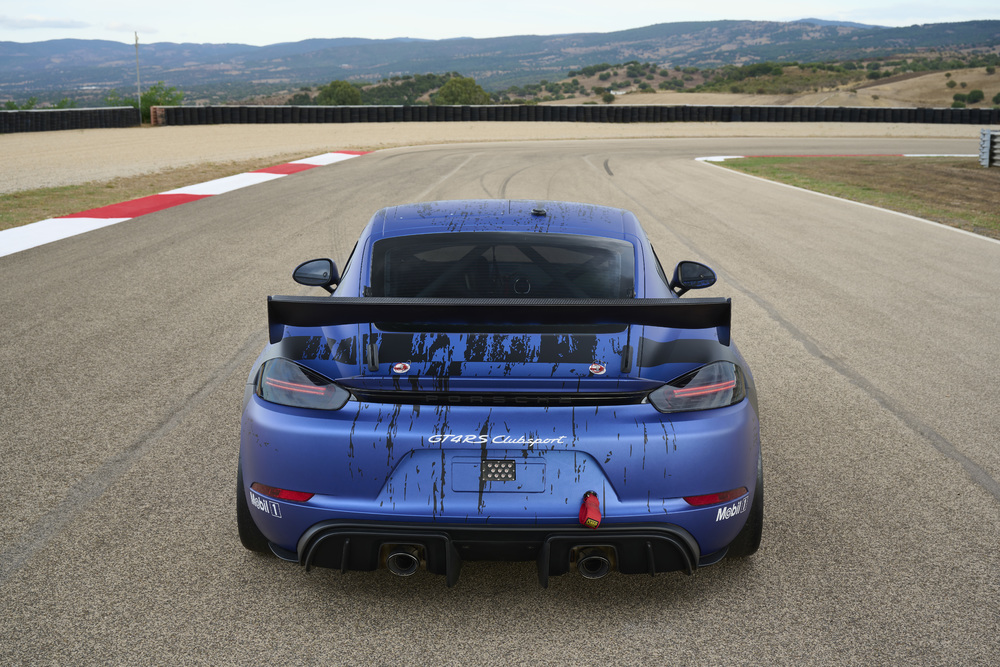 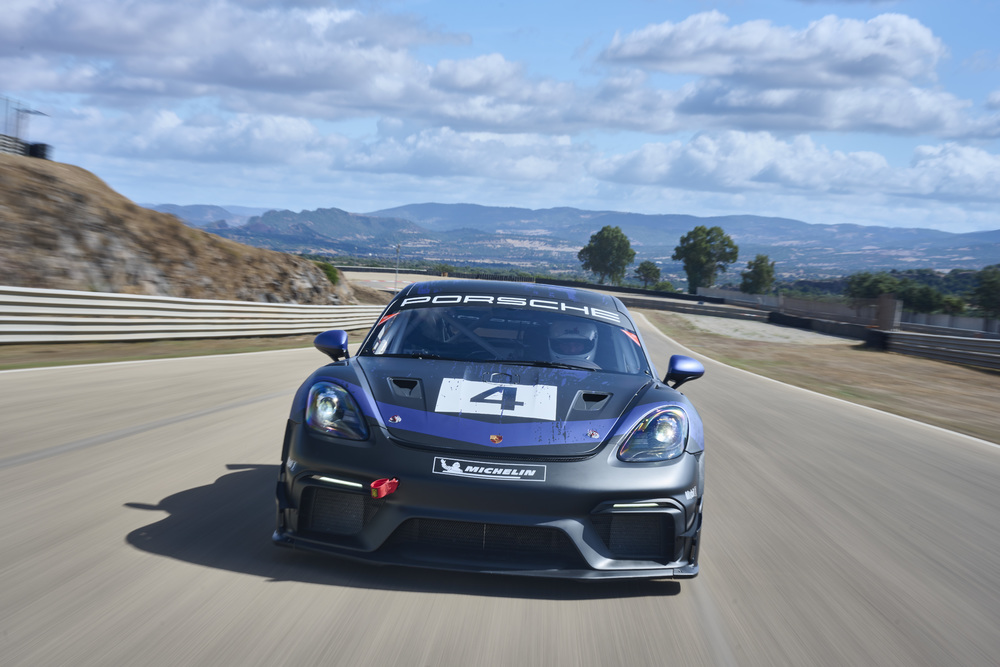 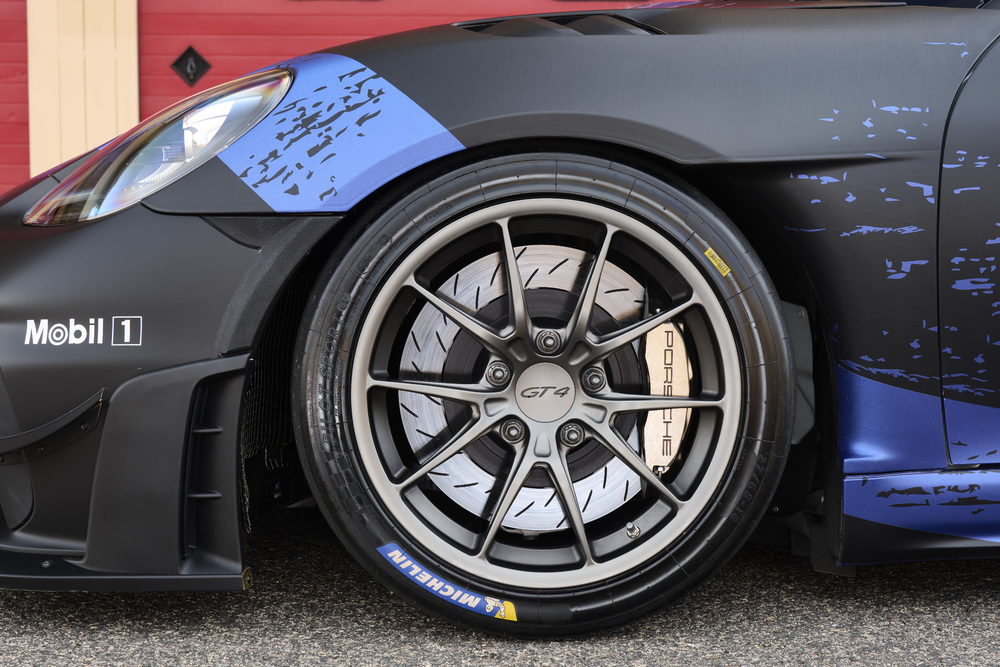 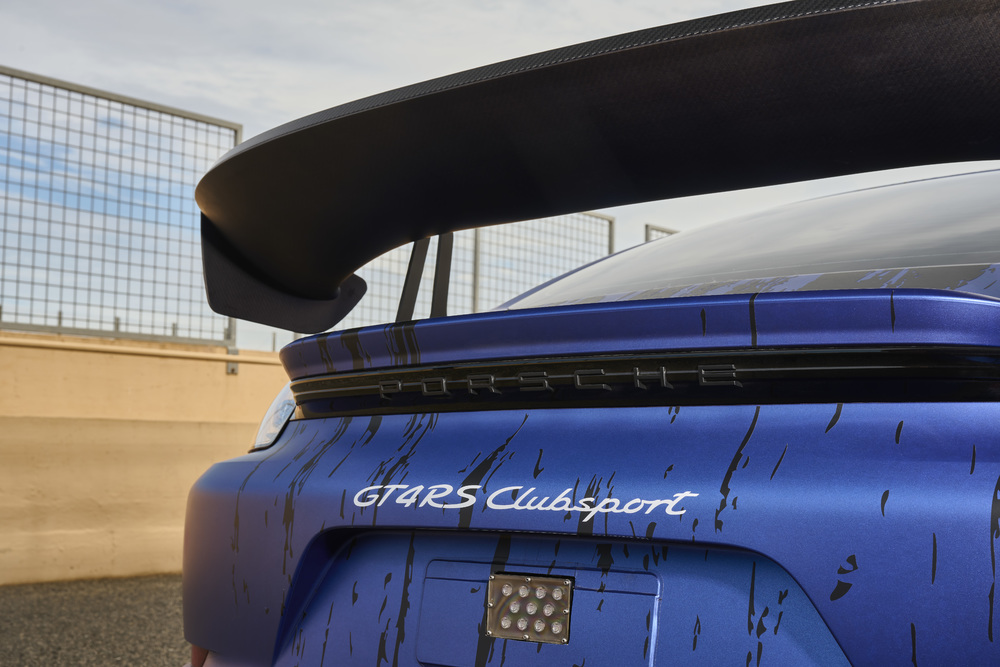 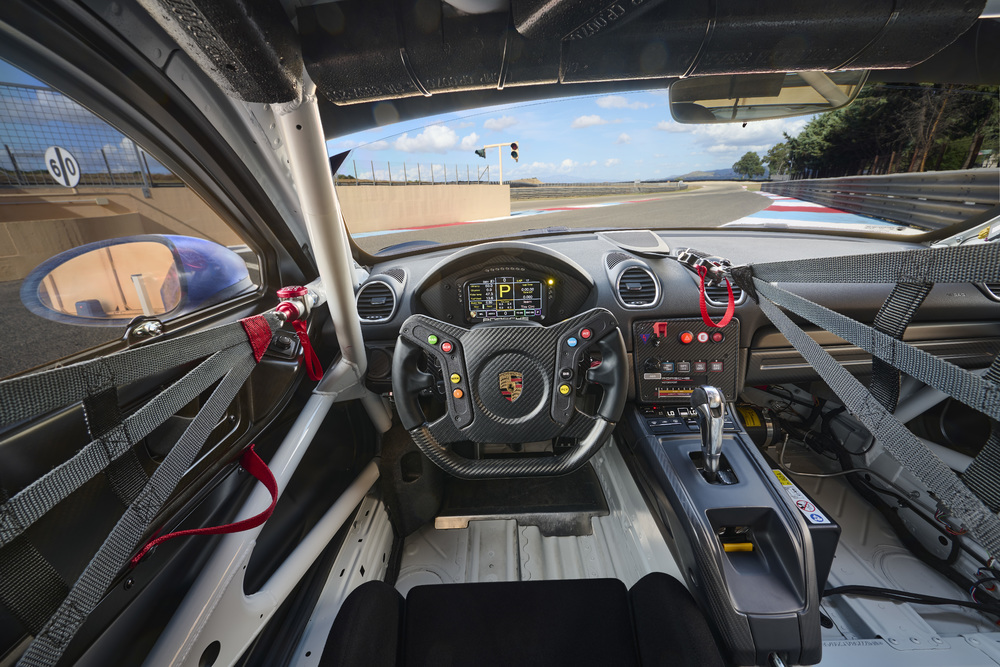 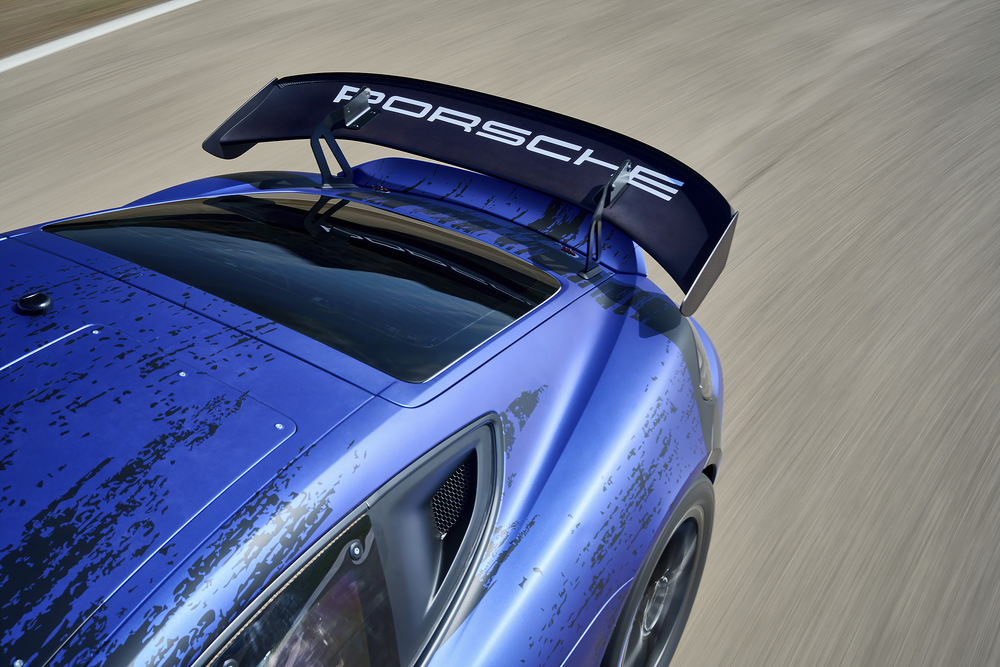 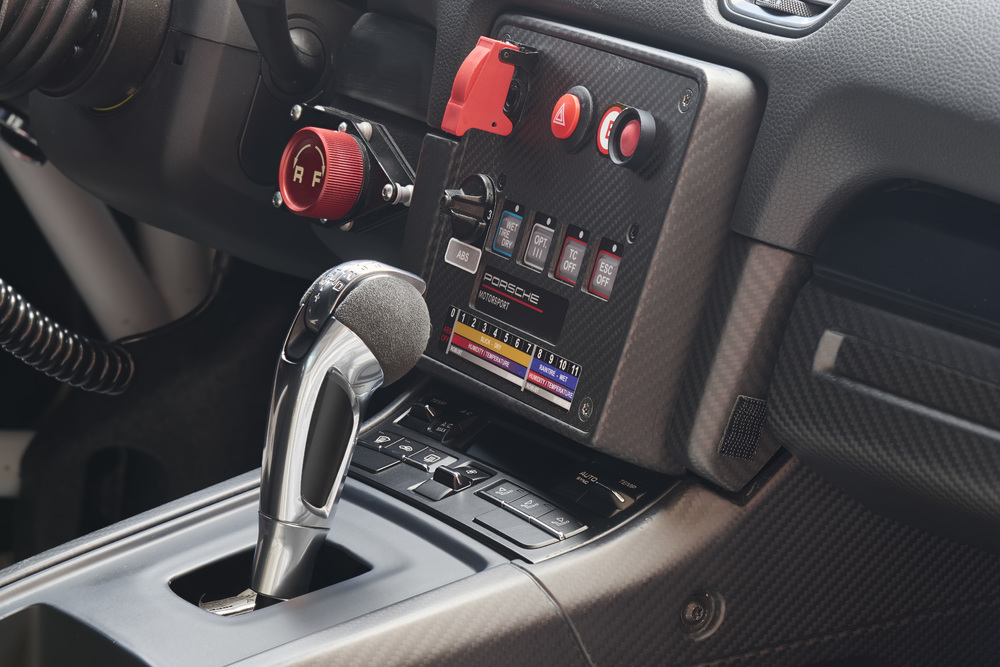 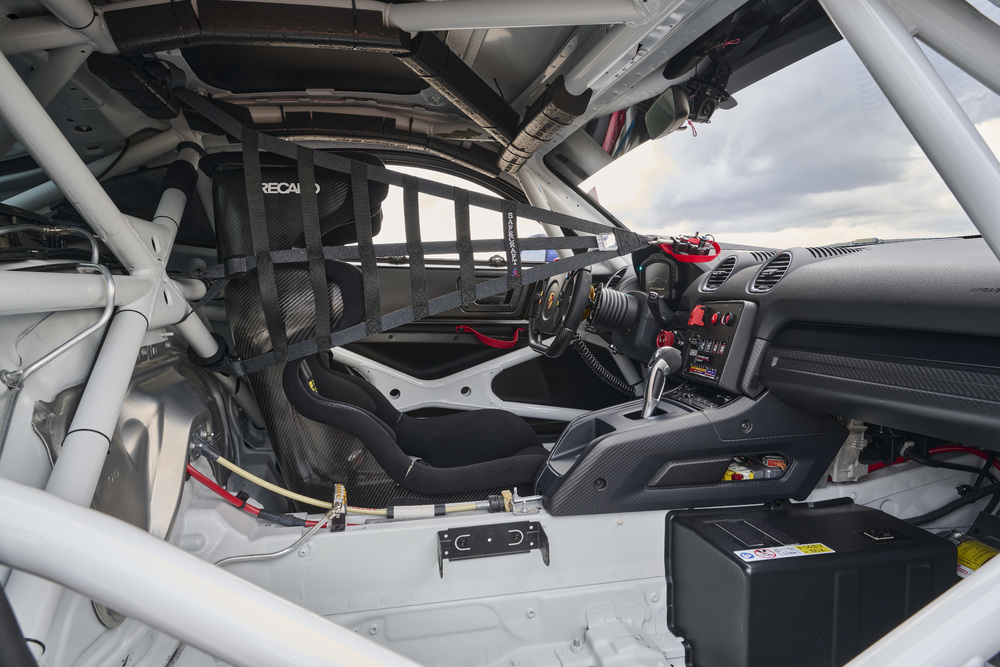 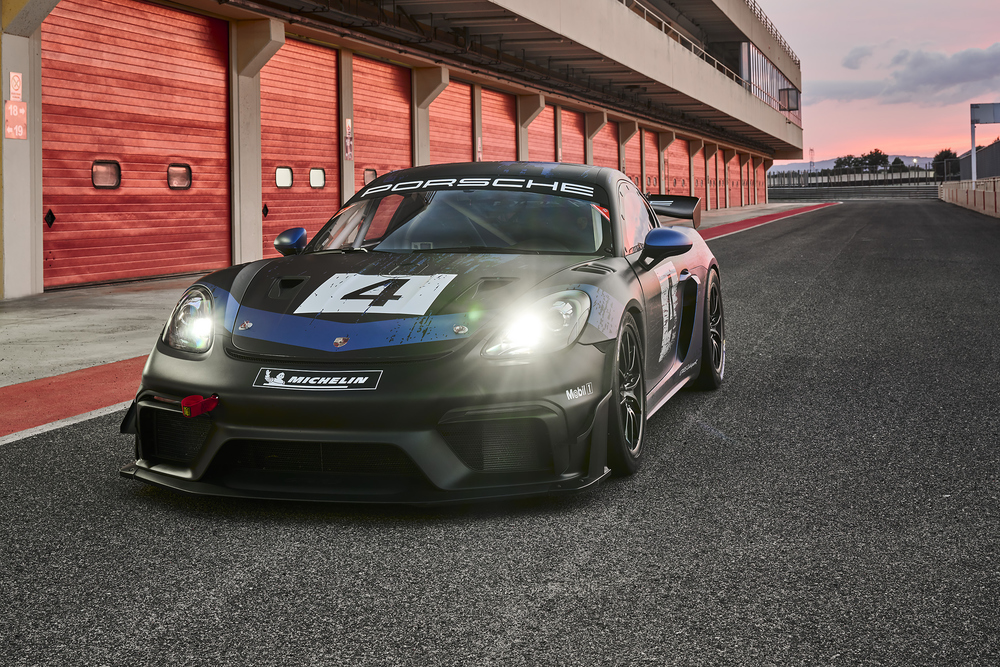 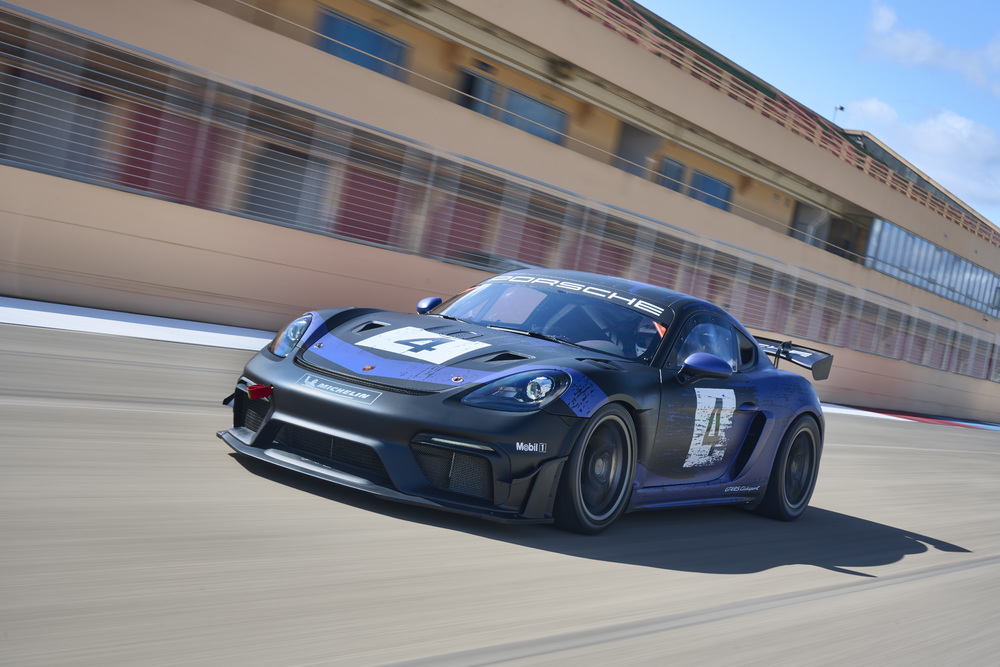 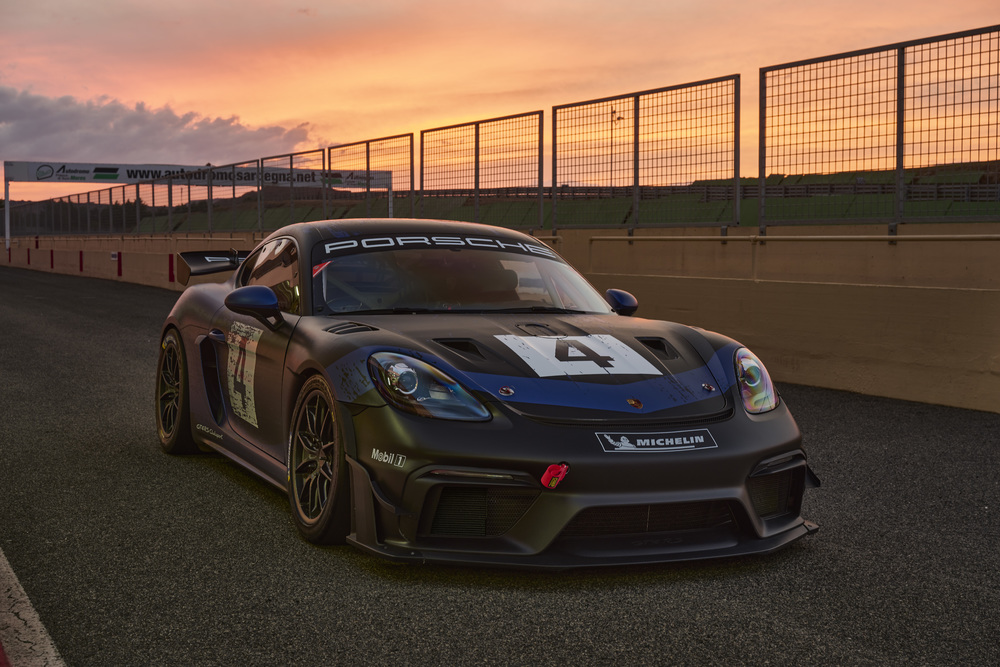 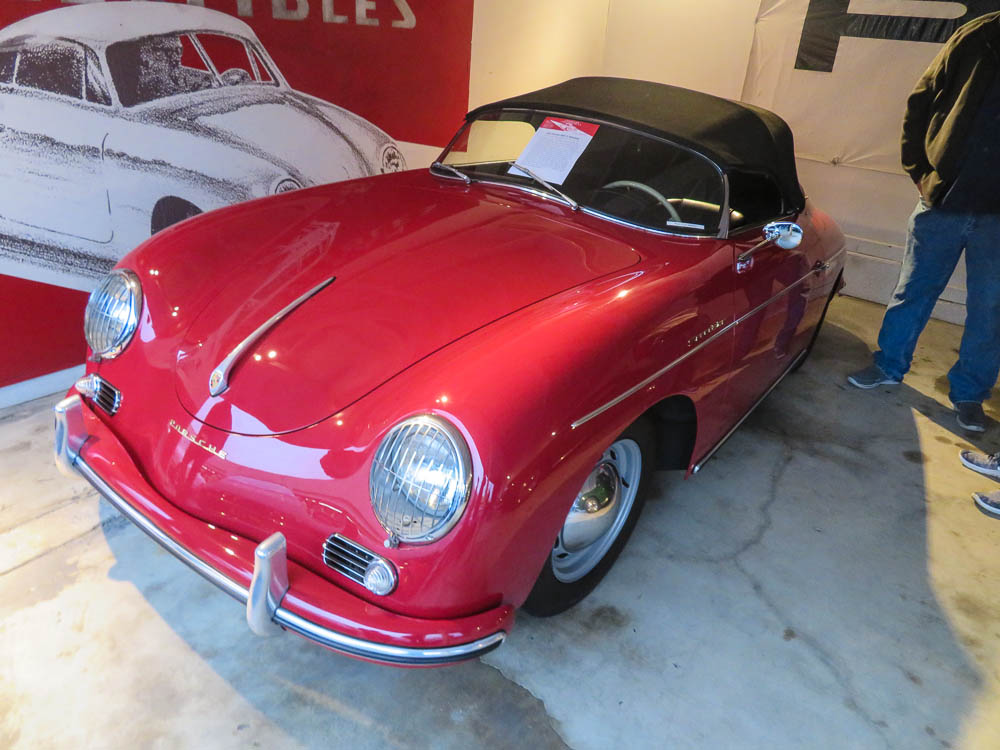