Coupé and Cabriolet with new options and significantly increased power

The Porsche 911 Turbo has been the quintessential high-performance sports car with everyday usability for the past 45 years. Following the market launch of the 911 Turbo S, the next generation 911 Turbo Coupé and Cabriolet are now being introduced – even more powerful, even faster and even more individual. Thanks to their 427 kW (580 PS) engines, 30 kW (40 PS) more than their predecessors, both model variants dip under the magic three second 0-100 km/h mark with a time of 2.8 seconds (0.2 seconds faster). 750 newton metres of torque (up 40 Nm), now without an overboost time limit, make quick sprints even more spontaneous and effortless. Acceleration, power output and torque of the new 911 Turbo therefore all match those of the previous generation 911 Turbo S. Power transmission is performed by an eight-speed PDK gearbox with a Turbo-specific set-up while its top speed remains unchanged at 320 km/h. Options such as the Sports and Lightweight Design packages, sports chassis and sports exhaust system are available for the 911 Turbo for the first time. As a result, customers will be able to adapt their vehicle even more to their individual tastes.

The new sports cars are following in prestigious footsteps as the 911 Turbo has been synonymous with luxury and performance since its market launch in 1975. Each generation has continued to live up to the claim of being a global benchmark for high-performance sports cars. The 911 Turbo combines sportiness with everyday usability, emotive dynamism with reliability and exhilarating performance with efficiency. The latest generation of the two-plus-two seater is more than twice as powerful as the original Turbo, which was powered by a three-litre, single-turbocharged, 260 PS flat six. While the 911 Turbo may have become faster, larger and more comfortable over the years, it has always retained its fundamental characteristics.

The engine of the new Porsche 911 Turbo

The new 911 Turbo’s 3,745 cm3 six-cylinder boxer engine boasts an increased output of 580 PS and now features symmetrical VTG turbochargers with electrically controlled bypass valves. In conjunction with its redesigned charge air cooling system and the use of piezo injectors, this improves responsiveness, performance, torque characteristics and its ability to rev freely. The chassis and body have become wider. The front axle now steers even more precisely thanks to an additional 42 millimetres of front track width and new 20-inch 255/35 tyres. The active all-wheel control PTM is now able to transfer even more power to the front wheels while traction at the actively steered rear axle is increased by a 10 mm-wider track as well as 315/30 tyres on 21-inch wheels – one inch more than on the front axle. The revamped braking system is even more powerful and can be recognised by its red fixed callipers that are fitted as standard. The grey cast iron brake discs at the front now measure 408 mm in diameter (28 mm more than before) and are 36 mm thick (two millimetres more). The rear axle features 30 mm-thick brake discs with a diameter of 380 mm.

A sports exhaust system is optionally available on the 911 Turbo for the very first time. Two different chassis variants are also new: while the standard PASM chassis offers a greater spread between sportiness and comfort, the significantly firmer, electrically controlled 10 mm-lower sports suspension benefits the agility of the new 911 Turbo. Its set-up is aimed at enhancing the car’s dynamics and provides even more stability in high-speed driving, such as when the vehicle is used on race circuits. The optional PDCC hydraulic active anti-roll stabilisation and PCCB ceramic brake system with ten-piston fixed callipers at the front refine the new model’s driving dynamics yet further.

The design of the new Porsche 911 Turbo

The design of the 911 Turbo has become even more muscular. The body has been widened by 45 mm to 1,840 mm at the front wheels to accommodate the new chassis, while the new bonnet’s striking swage line underlines the car’s sporty character. LED headlights with PDLS Plus illuminate the road as standard. At the rear axle, the body is now exactly 1.90 metres wide (20 mm more). Other distinguishing features of the new 911 Turbo are its enhanced adaptive aerodynamics, which feature electronically controlled cooling air flaps at the front, its larger active front spoiler and significantly larger variable rear spoiler. The air intakes on the rear side panels, so characteristic of the 911 Turbo, now draw in process air rather than the cooling air they did before, while the charge air coolers are now positioned directly in the air flow under the rear lid. The continuous light bar with its LED tail lights, as well as the new louvred rear lid grille with silver trim strips, round off the design of the rear of the car.

The appearance and performance of the vehicle can be additionally sharpened by the optional Lightweight Design and Sports packages. The Lightweight Design package for the Coupé reduces the vehicle’s weight by 30 kilograms. Among other things, this is made possible by use of lightweight full-bucket seats, the omission of the rear seats and the fitting of less insulation, which also means that drivers can enjoy the sound of the engine even more directly. The Sports package features the 911 Turbo Sport Design package as well as additional features in Black and in Carbon – not to mention Exclusive Design tail lights.

Interior of the new Porsche 911 Turbo

The basic elements of the modern interior correspond to those of the 911 Carrera models with Porsche Advanced Cockpit and Direct Touch Control. The centre screen of the PCM is now 10.9 inches, and can be operated quickly and without distraction thanks to its new architecture. The particularly high-quality and extensive equipment list includes fully electrically controlled 14-way sports seats, the Sport Chrono package, a GT sports steering wheel with shift paddles, multifunction and mode switches as well as the powerful BOSE® Surround Sound System. Numerous options are available for further personalisation, including Porsche InnoDrive with adaptive cruise control, Lane Keeping Assist with road sign recognition, Night Vision Assist, Surround View and the Burmester® High-End Surround Sound System. 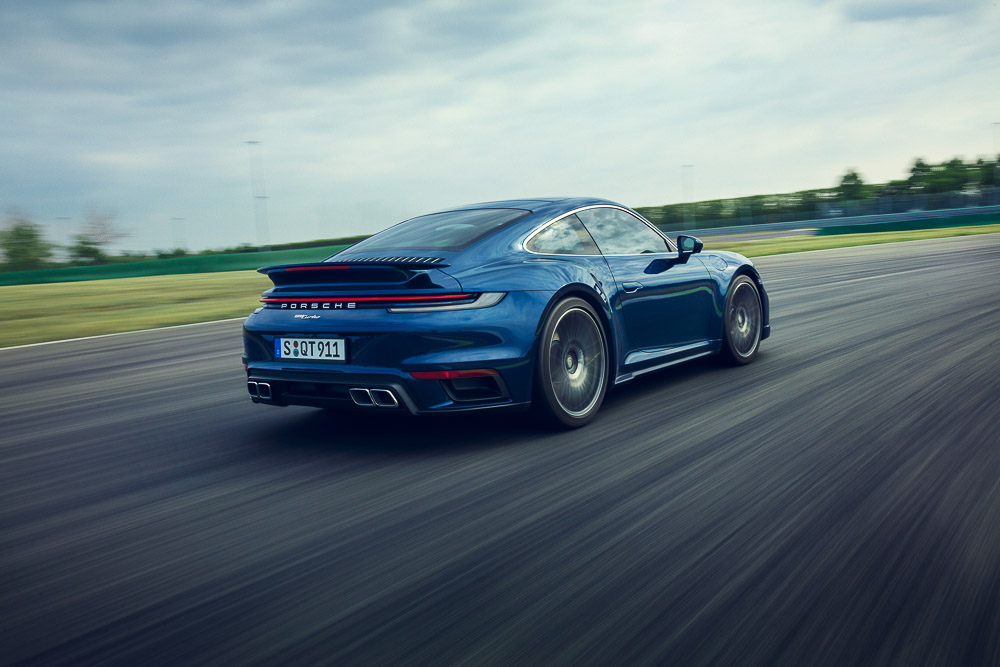 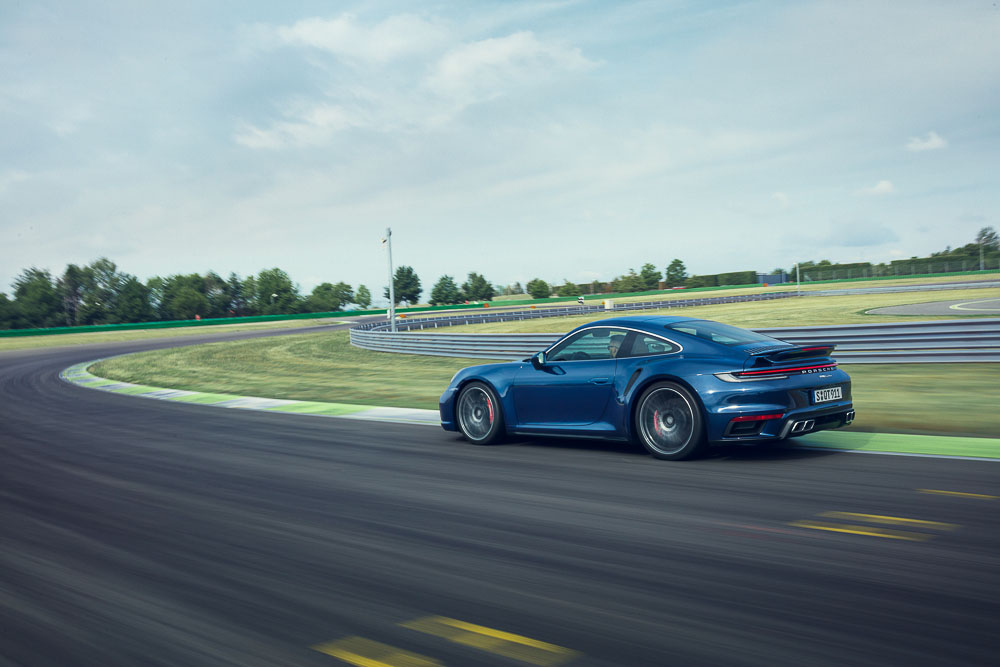 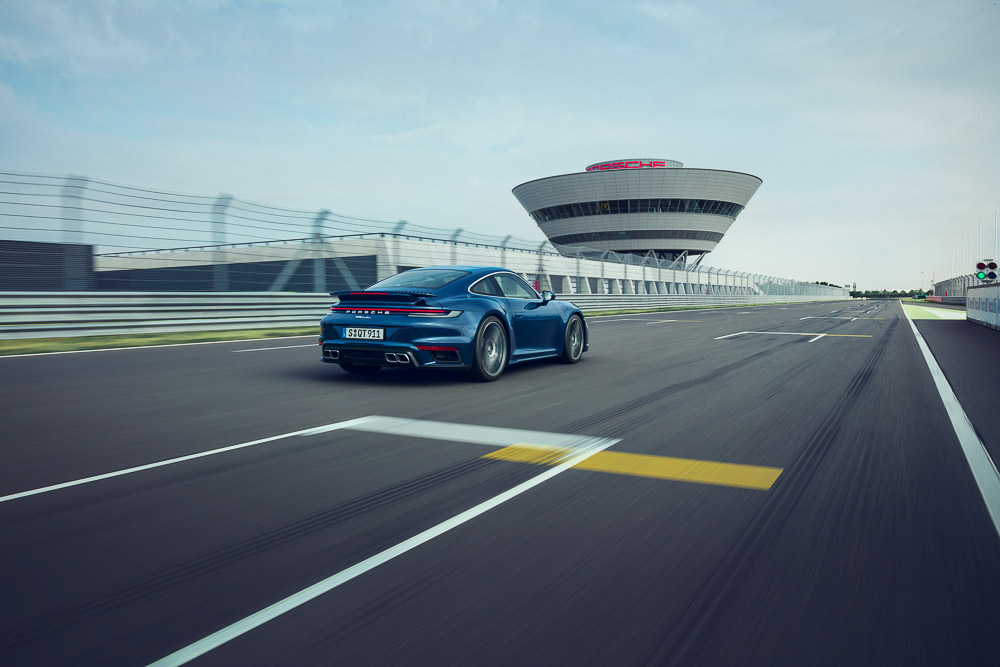 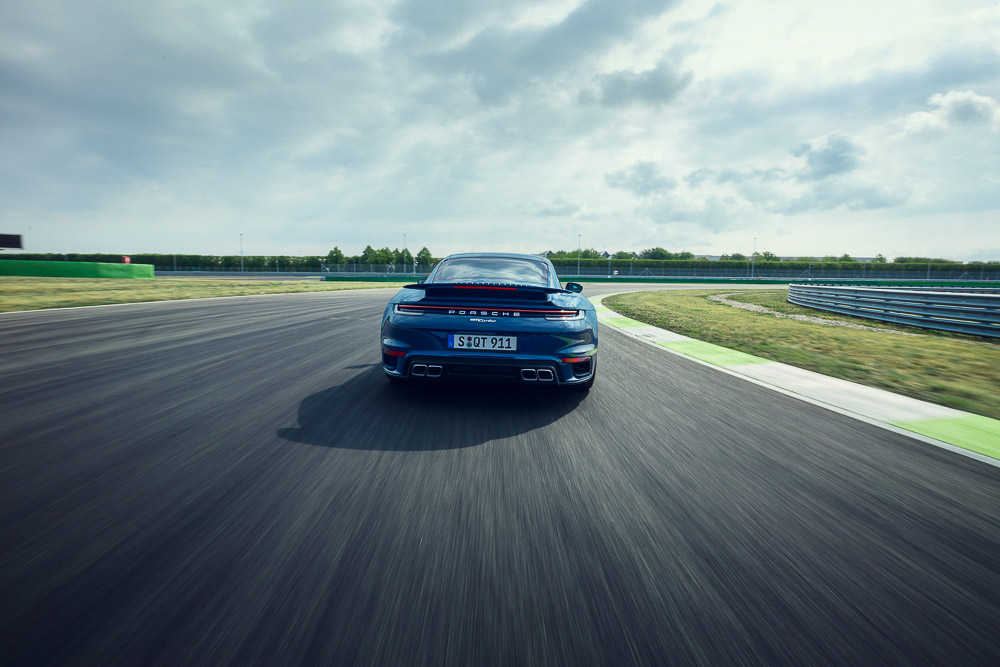 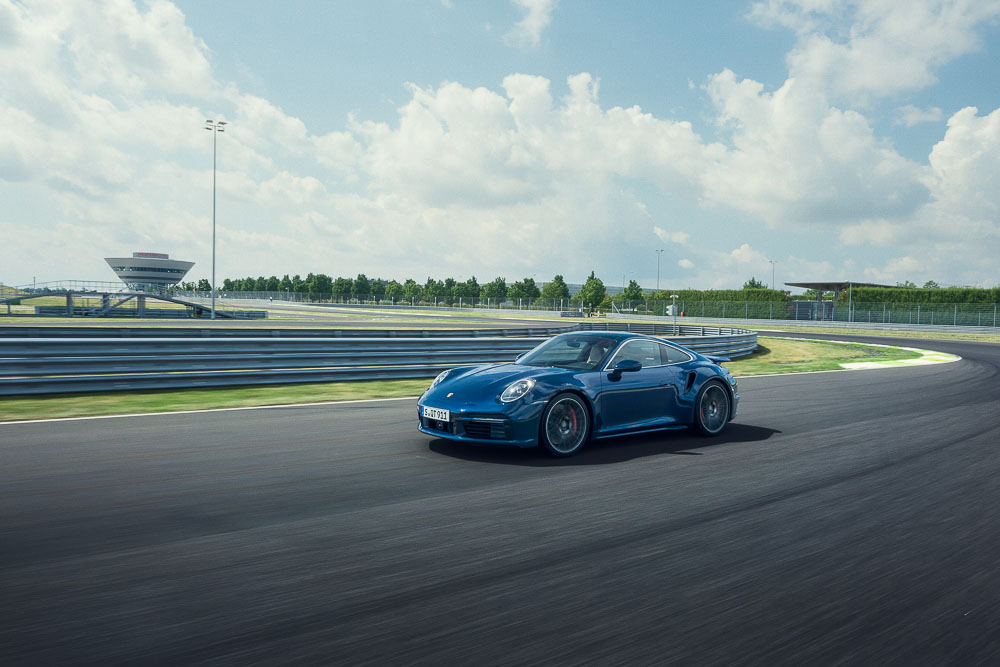 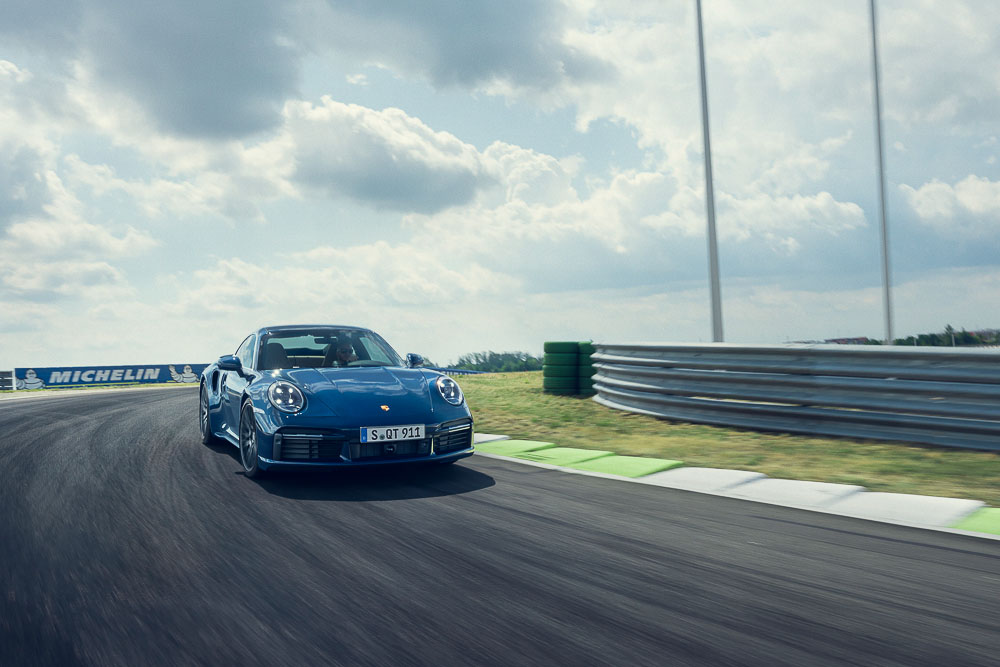 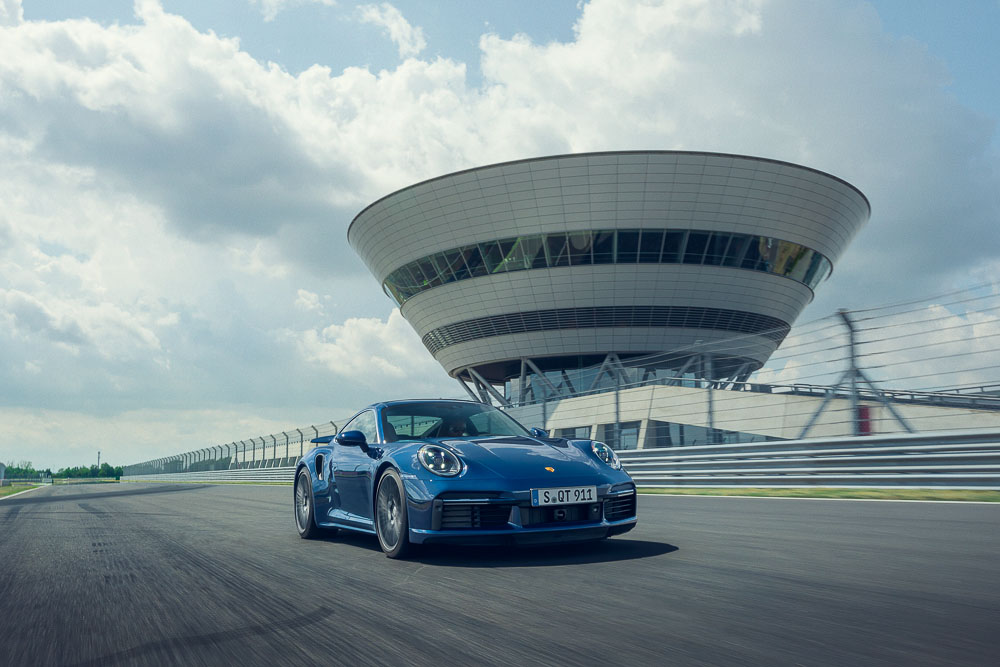 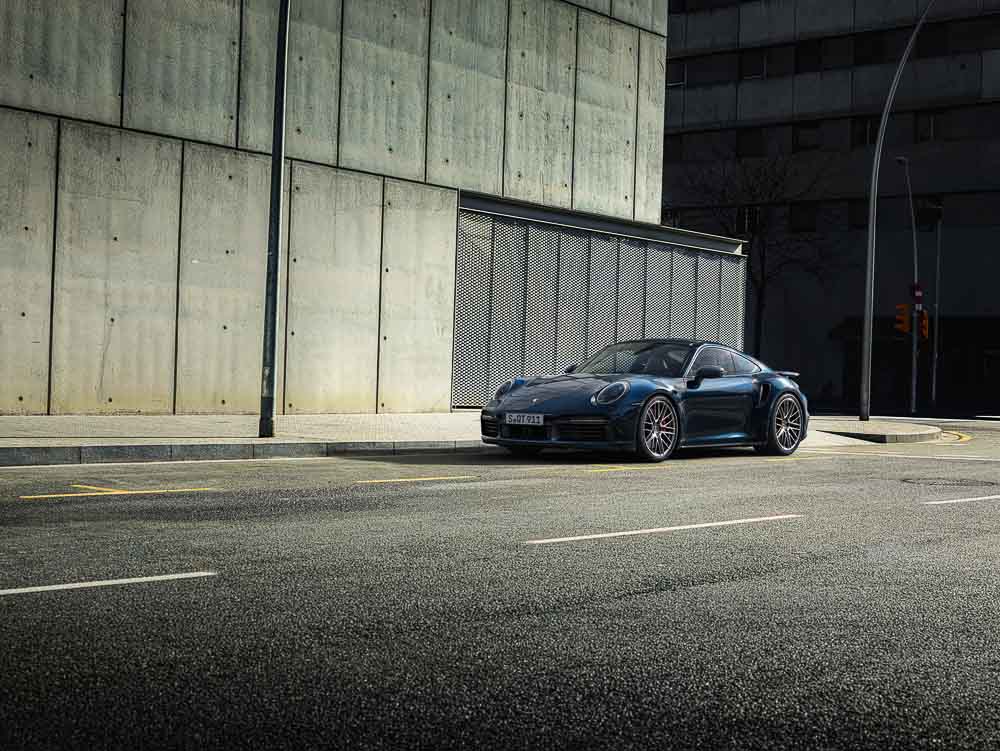 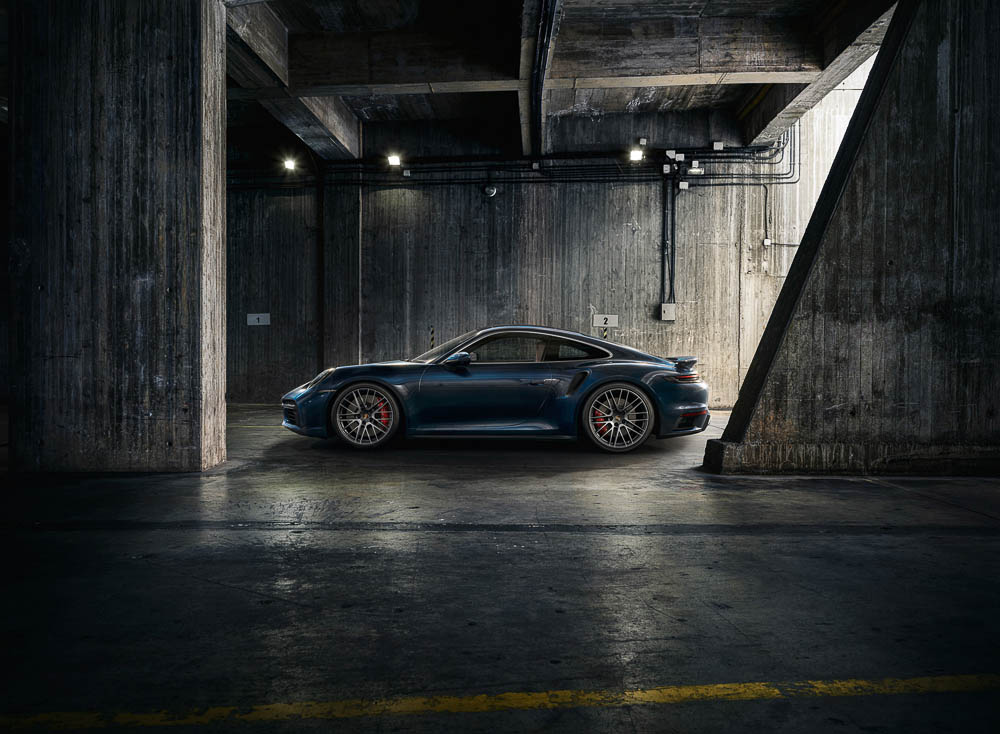 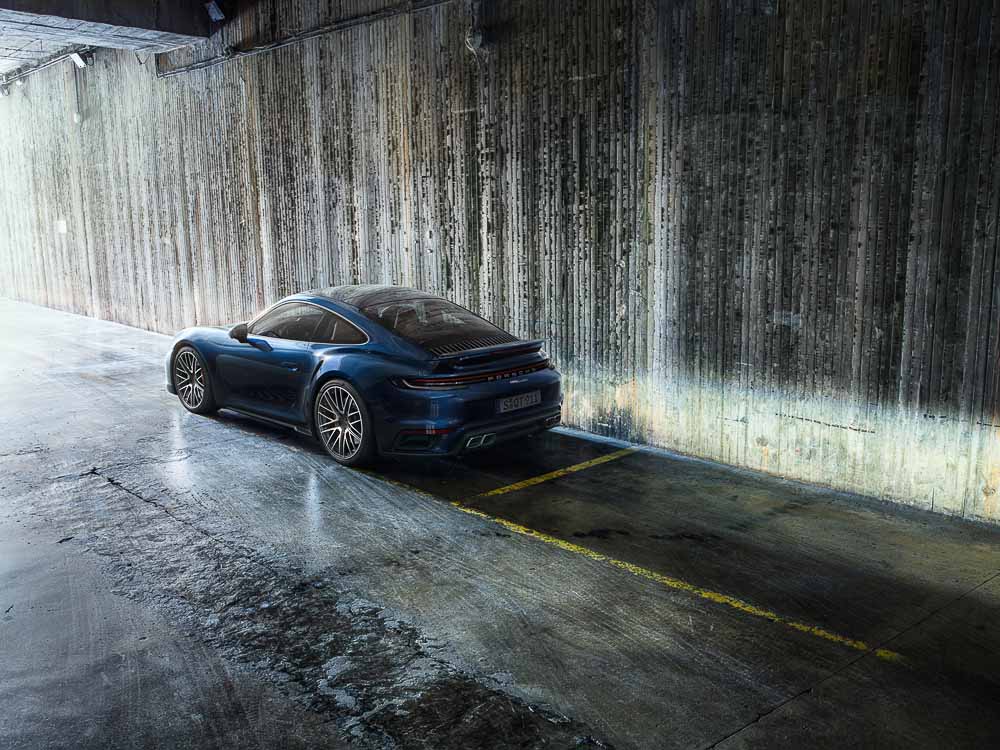 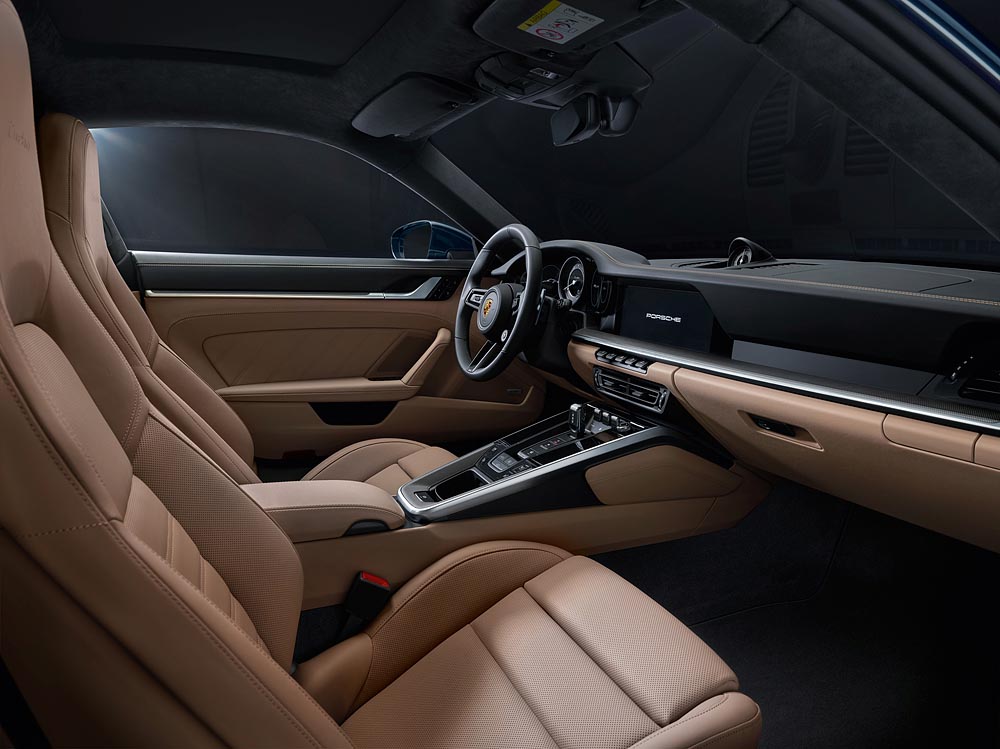 The Porsches at the Bonhams Zoute Sale 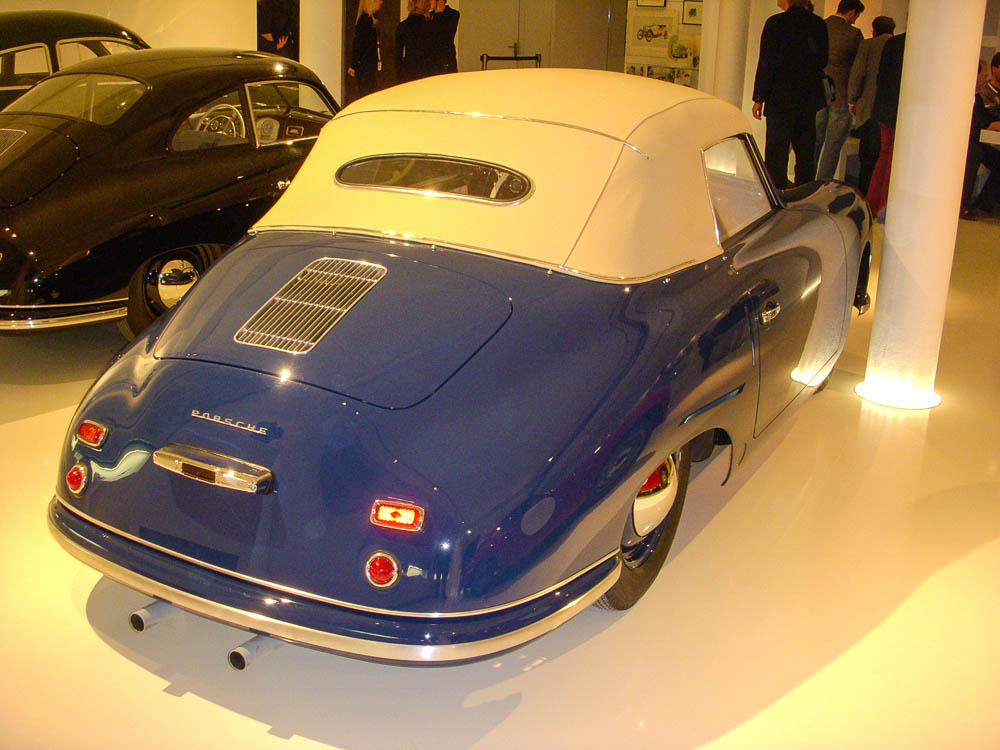