Eventful year on the world’s roads: In 2016, the Porsche Museum will once again join the most prestigious classic car events around the globe. An overview.

The ‘Rolling Museum’ was out and about beyond the museum walls with over 280 vehicle appearances in 2015 alone. This year the historic cars will be taking to the international stage at events including the Targa Florio Classica on the island of Sicily, the Austrian Ennstal Classic and the Top City Classic Rally in China. The brand ambassador’s key dates for 2016 are already set.

They start with the California Mille from April 24 to 28. Drawing on the example of the legendary 1,000 miles of the Italian Mille Miglia, it passes through the diverse landscape of California over the course of four days. The sports car manufacturer is sending two Porsche 356 cars to the west coast: a 356 Speedster 1500 from 1955 and a 365 A coupé from 1956 will both be entering the event.

Shortly after that, Porsche will be attending not one, but two anniversaries in Sicily: exactly 60 years after the Stuttgart company’s first victory at the Targa Florio, it will be sending a Porsche 356 Speedster 1600 S (model year 1958) and a 911 Carrera 2.7 RS (from 1973) to the 100th running of Europe’s oldest endurance race. In 1956, Umberto Maglioli in a 550 A Spyder secured the first win for the then still young sports car company. To mark this occasion Dutch racing driver Gijs van Lennep, who won the Sicilian road race in 1973, will be driving a former participating vehicle, the 911 RSR. The four-day Targa Florio Classica begins on May 5 in Palermo.

The Porsche Museum will this year be taking part for the first time in the Historic Grand Prix, which is staged from May 13 to 15 in Monaco. The rules of this exclusive motorsport event stipulate that all competing cars have to be historic grand prix vehicles. Two weeks ahead of the Formula 1 event, a Porsche Formula 1 car (from 1962) and Formula 2 car (from 1960) will therefore being doing a series of demonstration runs around the street circuit in the Monegasque principality.

From June 3 to 4, the Porsche Museum’s classic racing cars will be appearing in the traditional Paul Pietsch Classic. To mark the 40th anniversary of the transaxle models, actor and TV detective Richy Müller will be steering a rare 944 Turbo convertible from 1991 through the Black Forest.

From July 27 to 30, the Porsche Museum will then be lining up several historic legends at the Ennstal Classic, which for the third year in succession will be very much dominated by Porsche. With a hill prologue, tours through the Tauern region and a city grand prix, the three-day event provides a festival of motoring for drivers and spectators. In addition to several Porsche 356 cars, one of which will be driven by Dr. Wolfgang Porsche, Chairman of the Supervisory Board of Dr. Ing. h.c. Porsche AG, a 911 2.0 Targa (model year 1967) and 550 Spyder (from 1957) will be appearing. Visitors can also look forward to seeing Le Mans winner and DTM champion Hans-Joachim Stuck, who will be sitting behind the wheel of a 356 Abarth from 1961.

Entering two models from the transaxle generation, the Porsche Museum will take on the numerous time-speed and reliability tests of this year’s Saxony Classic from August 18 to 20.

Starting on August 25, actors Richy Müller and Siegfried Rauch will then be driving for Porsche for three days from Hamburg to Berlin along some of northern Germany’s prettiest byroads. That’s because two classic cars from the museum pool will be taking part in the Hamburg-to-Berlin Classic.

The Porsche Museum finishes off its appearances for 2016 with participation in the Top City Classic Rally, which is initially staged from September 17 to 20 around Peking and shortly thereafter, from September 24 to 27, starting out from Shanghai. The interplay between pulsating mega-cities, fascinating landscapes and cultural sights created by the two rallies, which are run by the Stuttgart motoring press, forms then a fitting backdrop for bringing an eventful year to a close.

With its concept of the ‘Rolling Museum’ Porsche is taking a very special approach. Practically all of the museum exhibits are roadworthy and thus fulfil the original purpose for which they were built: to be driven. And the specialists of the Porsche Museum workshop ensure that both before and during every tour of duty the rolling ambassadors of Porsche history are well prepared and in top-fit form for every event. Unlike almost any other motoring museum the Porsche Museum thus stands for variety and vibrancy. Instead of a conventional, static exhibition, as a result of the exhibits being continuously rearranged it offers a constantly changing scene in Zuffenhausen. 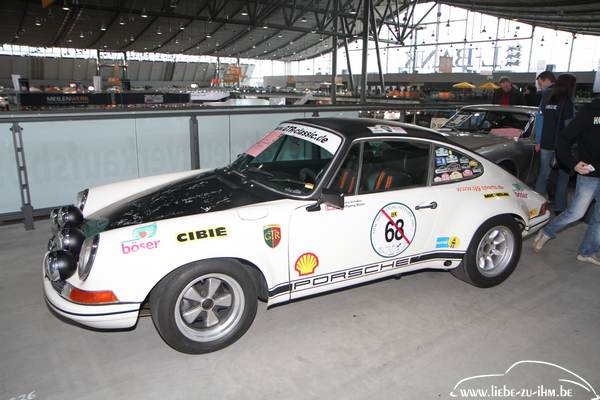