The Collectors of memorabilia, automobilia, and literature definitely know Automobilia Ladenburg. The German auction house has an experience of close to 20 years of sourcing collectibles and auctioning them. With 2 auctions every year, the auction catalogs are welcomed by collectors all over the world. The 2021 Automobilia Ladenburg Spring Auction takes place May 7-8 2021. And again, they filled the catalog with an amazing number of lots. Of course, many of them are Porsche, and we will shed a light on some interesting things.

We all know Jochen Mass, a successful racer and former member of the Porsche factory team. Automobilia Ladenburg secured some very interesting trophies and memorabilia that come directly from the Jochen Mass collection. Wouldn’t it be great for a fan, to have a Nomex racing suit, worn by Jochen Mass while driving a Porsche 993 GT2?

Or what do you think to decorate your memorabilia cabinet with a trophy from Jochen Mass?  Automobilia Ladenburg offers quite some of these trophies for auction. To name just a few: the winner’s cup from the 1983 1000km Rennen Nürburgring 1983 (Jochen Mass/Jacky Ickx in a Rothmans Porsche 956 ), the winner’s cup of the 1982 Fuji 6 hours race (Jochen Mass / Jacky Ickx in a Rothmans Porsche 956).

Before a car makes it to the assembly line, there is a huge lot of research and development work to be done. One part of the development process is the making and testing of the scale wind tunnel models.  As soon as the testing process has ended, the scale model serves no more use. They often end up gathering dust somewhere in the factory. These models however offer fans the possibility to have a unique piece of art at home. And probably they will be the only solution to have an original iconic Porsche like the Porsche 959 or Porsche 917 in the collection. More wind tunnel models offered for sale are the Porsche 911 G-model, the Porsche 928, and the Porsche 962.

Steve McQueen’s Le Mans definitely belongs to the most legendary race movies. Collectors would commit crimes to find original memorabilia connected with the movie. So, the crash helmet and gloves will undoubtedly attract the attention of the Le Man’s Movie collectors. During the filming, the helmet was among others worn by Steve McQueen, Brian Redman, Jo Siffert, and the multiple Le Mans winner Derek Bell.

On top of that, the helmet has 13 signatures, among them Hans Herrmann, David Piper, Herbert Linge, Wolfgang Porsche, and Jacky Ickx. The original gloves were worn by Siegfried Rauch. This actor played Erich Stahler McQueen’s strongest rival in the movie.

And there is more, much more…

This is just a small selection of Porsche-related items in the Automobilia Ladenburg Spring Auction. You can find so many more very interesting items in the catalog. The one-off Porsche 804 model, presented by Ferry Porsche to Huschke von Hanstein at his retirement is one of them. As usual, a whole bunch of Porsche parts comes up for sale. Further, you can find sales literature, factory posters, and more stuff that makes any collector happy in the auctioneer catalog.

Further information and the complete catalog can be found at the website of Automobilia Ladenburg. 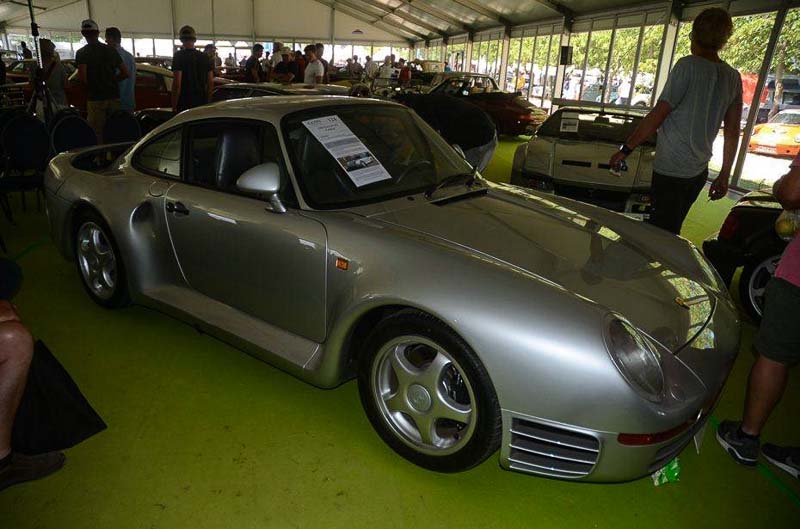