Porsche’s factory campaign in the North American sports car scene came to an end for at the moment last weekend with the final outing in Sebring. At the twelve-hour race in Florida, the Porsche GT Team and its long-standing partner Core Autosport once again made a strong impression: At a spectacular final round of the season, the two Porsche 911 RSR took the flag in first and second place.

Perfect debut with major wins and many titles

When the American Le Mans Series and the Grand-Am racing series merged to become the Tudor United SportsCar Championship at the beginning of 2014, Porsche makes a decision. This new sports car scene would become the playing field for a new works squad and two Porsche 911 GT3 RSR. Joining forces with the experienced Core Autosport team from the US state of South Carolina, a top squad is created within a very short time. At the very first outing, the team scores a major achievement.

Works drivers Nick Tandy from Great Britain, Richard Lietz from Austria and Patrick Pilet from France celebrate a class win at the 24 Hours of Daytona. In the second round of the season, the legendary Sebring 12-hour classic, their factory colleagues Michael Christensen from Denmark, Jörg Bergmeister from Germany and American Patrick Long triumph. After strong performances at the following races and another victory at Petit Le Mans, Porsche promptly takes home the manufacturer’s title at the end of the season.

Unforgotten: Overall victory for Porsche at the Petit Le Mans in 2015

Fans are in awe and the strong rivals in the GTLM class cheer when Porsche harvests all titles in the North American Endurance Cup in its first year. This competition includes the longest and toughest races at Daytona, Sebring, Watkins Glen and the spectacular Road Atlanta. It is on this very racetrack not far from the headquarters of Porsche Cars North America that the works squad notches up what is arguably its greatest success in North America.

At Petit Le Mans in Braselton in early October 2015, Nick Tandy, Patrick Pilet and Richard Lietz not only beat their GTLM rivals but also outstrip the prototype vehicles in heavy rain. The Porsche 911 GT3 RSR scores the overall victory. This incredible feat hands Porsche its second straight manufacturers’ title as well as the team championship, with the prestigious drivers’ crown in the US racing series taken by factory driver Patrick Pilet.

The 2016 season turns out differently – at first. The organisers now run the championship under the new name IMSA WeatherTech SportsCar Championship. Porsche fields the brand new 911 RSR for the first time. In the fierce competition against five other manufacturers in the GTLM class, the factory team under the name Porsche North America leaves the season-opening classics at Daytona and Sebring empty-handed. However, at round three on the spectacular street circuit of Long Beach in California, the works squad are back on the road to success.

Patrick Pilet and Nick Tandy clinch the maiden win for the new 911 RSR on the racetrack close to Los Angeles. Their factory driver colleagues Earl Bamber from New Zealand and Frenchman Frédéric Makowiecki follow up with a second class victory in Austin, Texas. At the start of the following season, Porsche fields a completely new RSR – with its 4-litre flat engine mounted in front of the rear axle for the first time.

In 2017, with the prototypes absent, Pilet and his German teammate Dirk Werner secure the overall victory at the picturesque Lime Rock racetrack. The pair also claims the drivers’ title in the North American Endurance Cup. At the end of the brand new Porsche 911 RSR’s debut season, the teams take home the championship title in this endurance competition.

As good as it gets – records, winning streak and all titles in 2019

In the 2018 season, the factory squad achieve three victories and many top results in qualifying with the two ca. 510-hp GT nine-elevens from Weissach, but other titles remain elusive. Things change dramatically the following season. 2019 turns into one of the most successful years in the history of Porsche Motorsport.

After colleagues have claimed victory at Le Mans and taken all titles in the FIA World Endurance Championship, Porsche’s American team steps up to the plate: First in the manufacturers’ championship, triumph in the team category and the drivers’ title for Earl Bamber and his Belgian teammate Laurens Vanthoor.

The victorious duo and their colleagues in the sister car, Nick Tandy and Patrick Pilet, clinch five wins in a row during the first half of the season. Such a streak of wins had never been seen before in the GTLM category. An additional outright victory at the Virginia International Raceway and a strong performance from the two Porsche 911 RSR decked out in the Coca-Cola design at the final round of the season at Road Atlanta are the icing on the cake of a dream year.

In the 2020 season, the Porsche GT Team initially face a tough test of patience. The new ca. 515 hp Porsche 911 RSR, which had impressively showcased its qualities at the first races of the FIA WEC, again turns heads in the IMSA series. At the first six events of the year, the works team posts pole position four times. During that same period, the two cars lead the field over a total of 3,445 kilometres – which is about the same as the combined distances of the Sebring and Road Atlanta endurances races!

Still, it takes until 17 October for the long-awaited first victory to be achieved. At Petit Le Mans, the ten-hour race on the outskirts of Atlanta, Nick Tandy, Frédéric Makowiecki and the Australian Matt Campbell bring the No. 911 car over the finish line in first place.

At the following race, Earl Bamber and Laurens Vanthoor notch up the first victory for a factory 911 at Laguna Seca. At that point the tradition-steeped racetrack in California was the only permanent circuit on the annual IMSA calendar where Porsche had never won.

Last weekend’s final appearance could not have gone more perfect. Race day in Sebring begins with five Porsche 911 RSR from three different generations turning parade laps. The vehicles flying the colours of Brumos, Coca-Cola and Mobil1, amongst others, are spearheaded by the latest model finished in a farewell livery. The stars and stripes paintwork and thunderous burnouts delight and thrill fans at the track.

And ultimately, the event ends in amazement: After an immaculate performance from the Core Autosport team at the twelve-hour classic, the works cars take the flag in first and second. After seven years, this triumph closes the circle perfectly for the Porsche GT Team in the IMSA series: Victory at the maiden outing in 2014 at Daytona, victory at the final race in Sebring 2020. 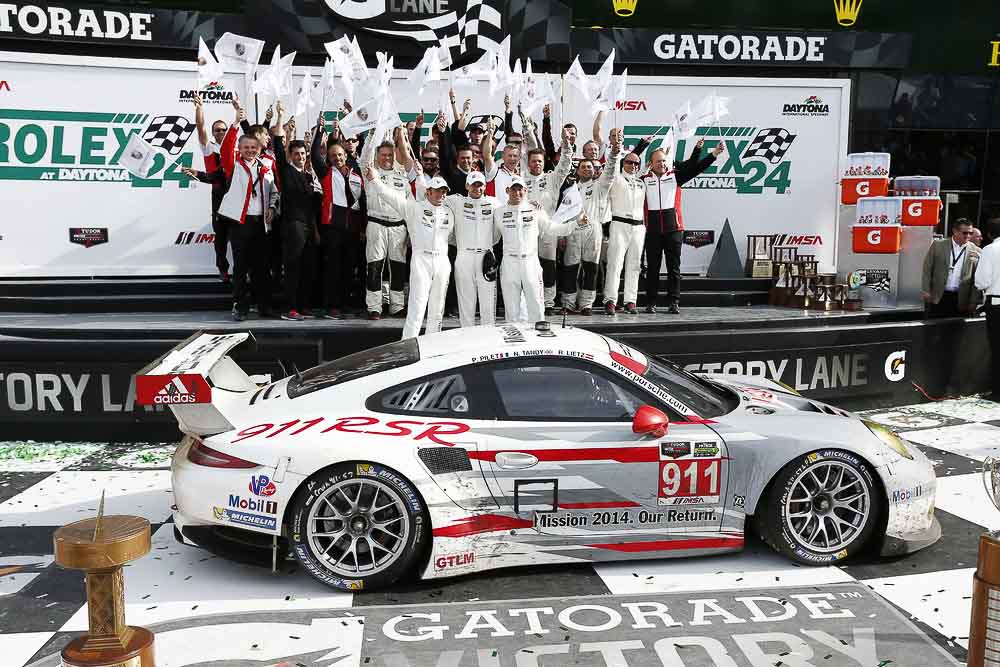 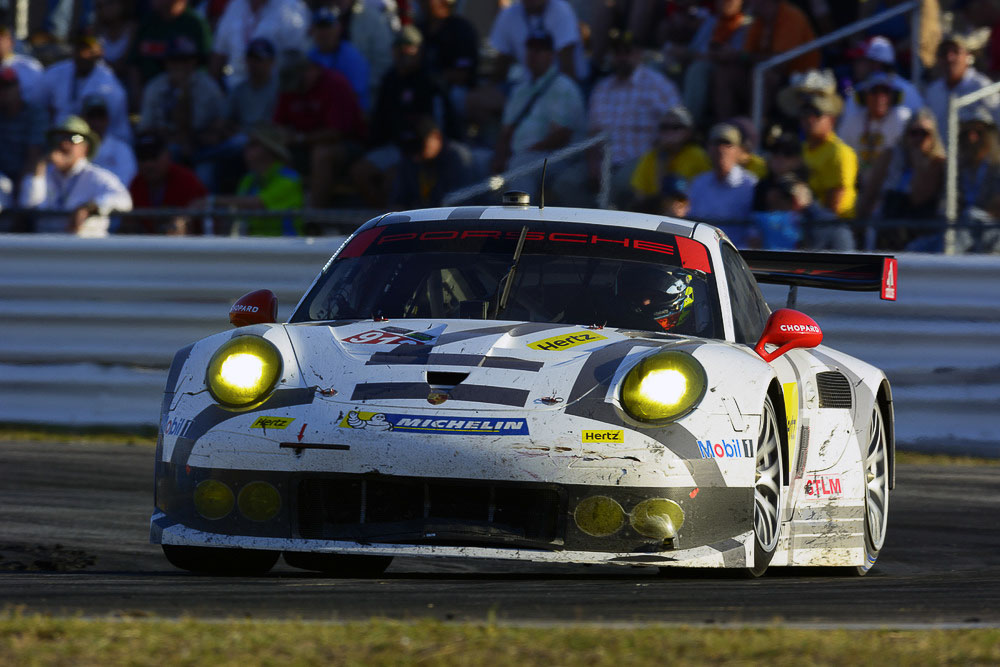 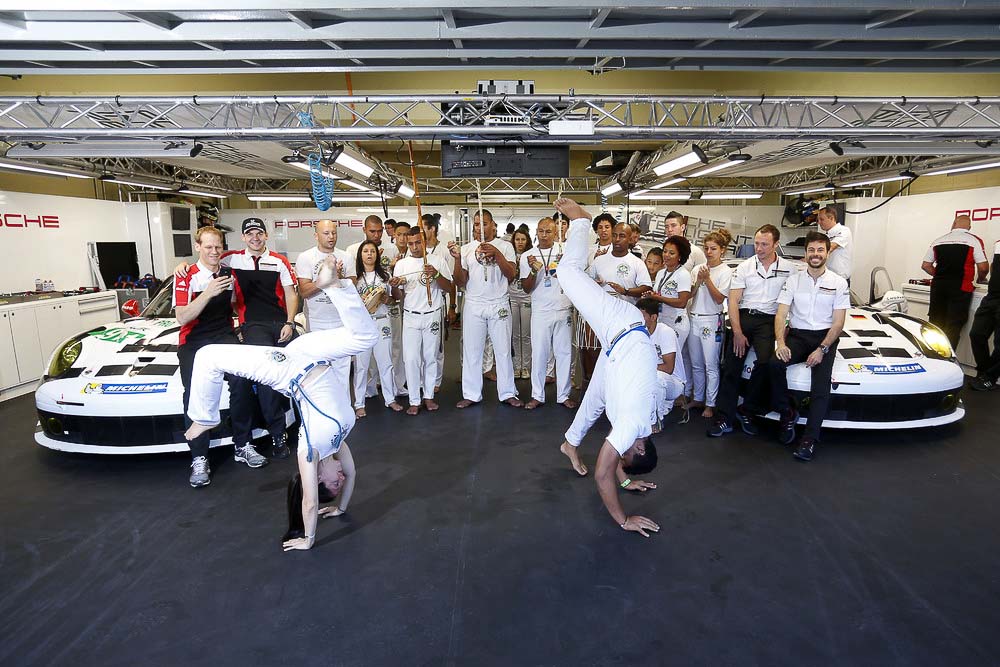 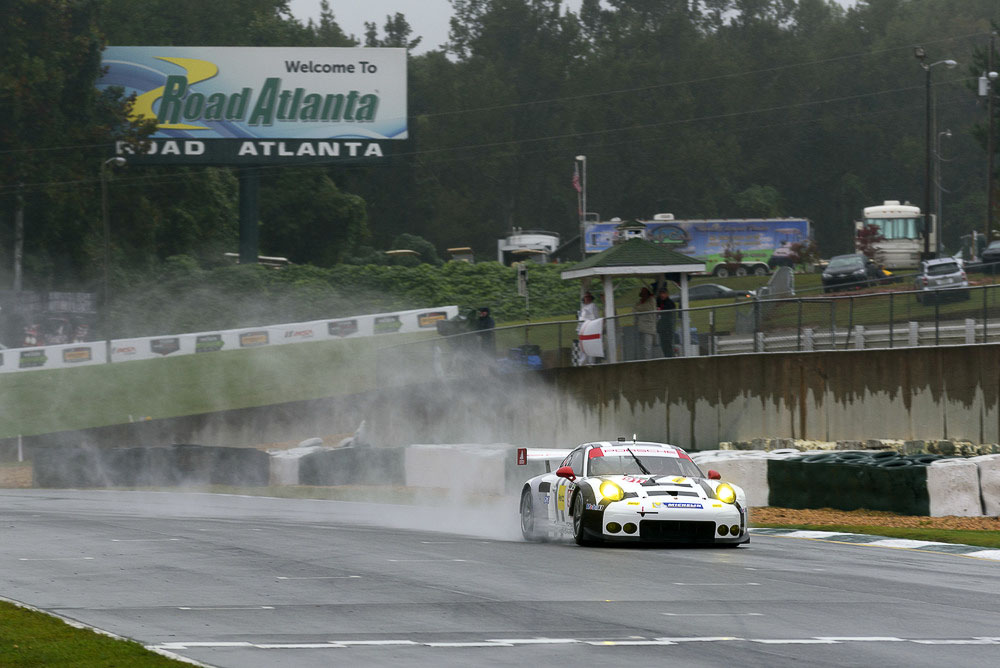 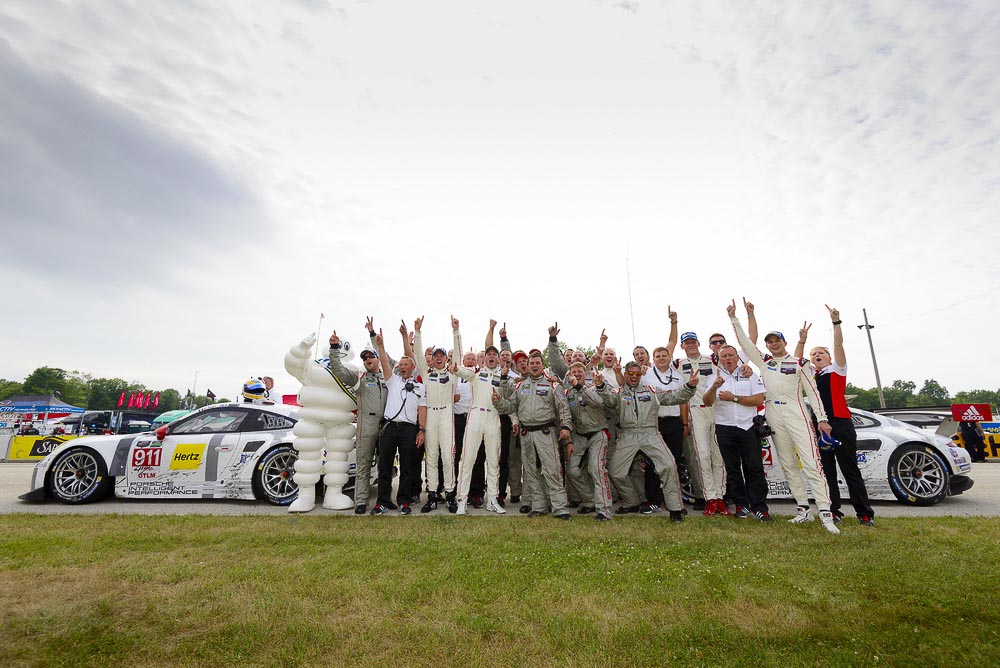 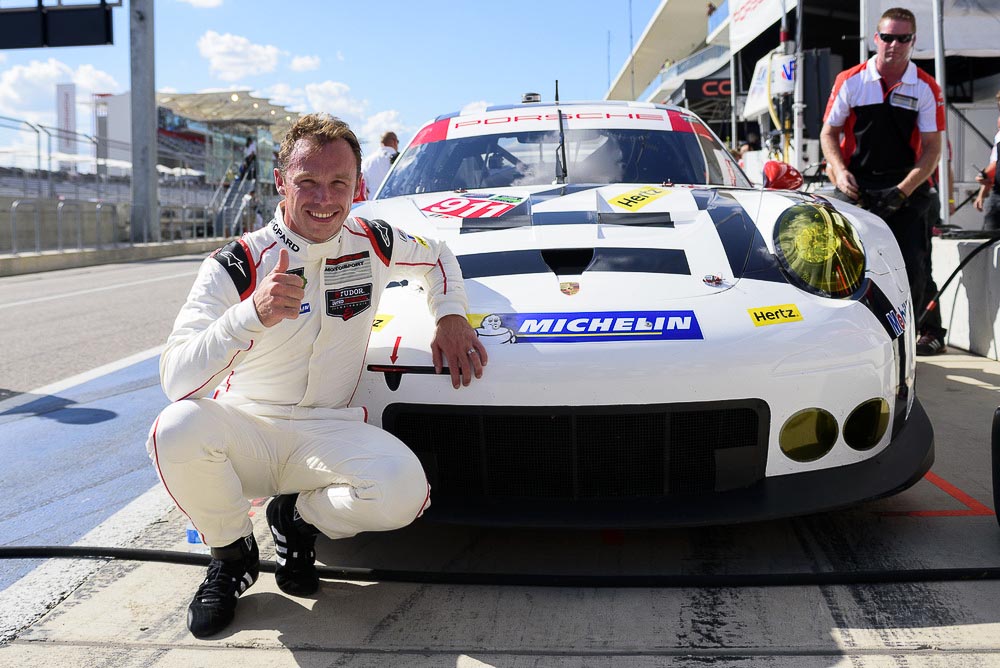 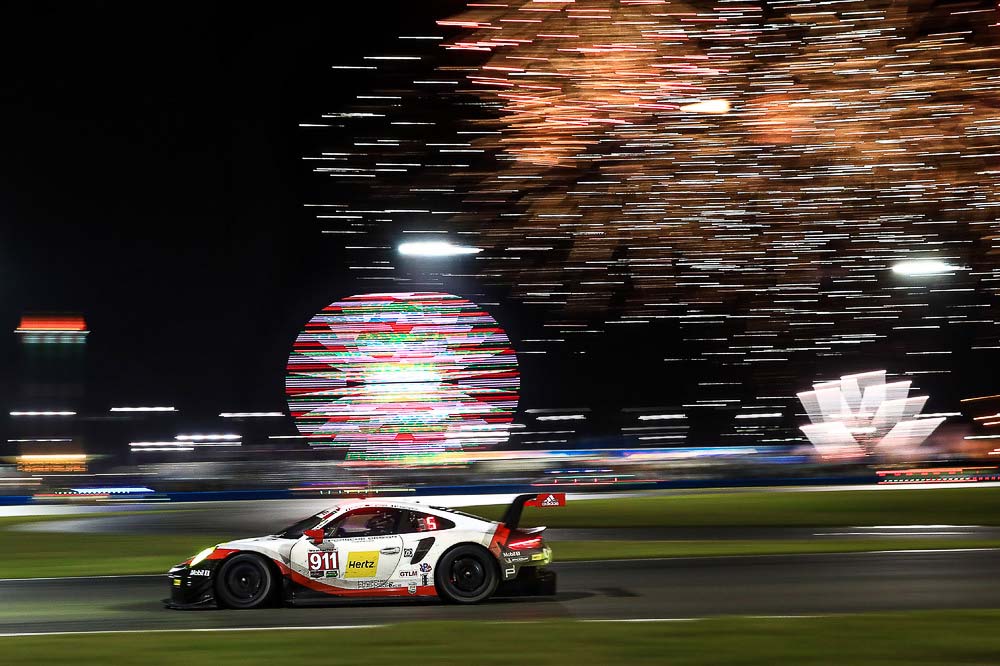 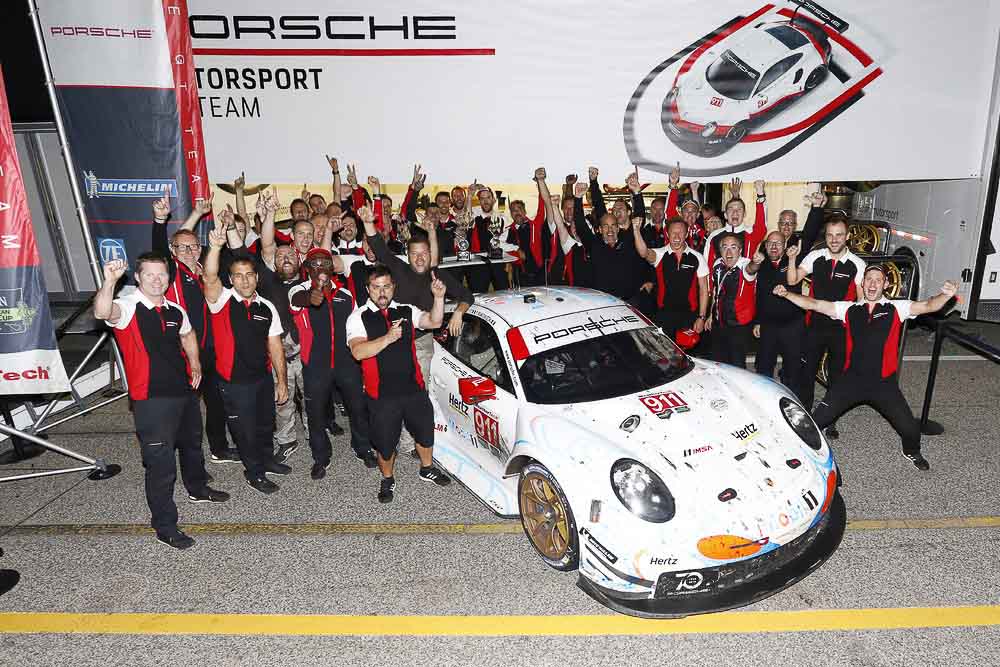 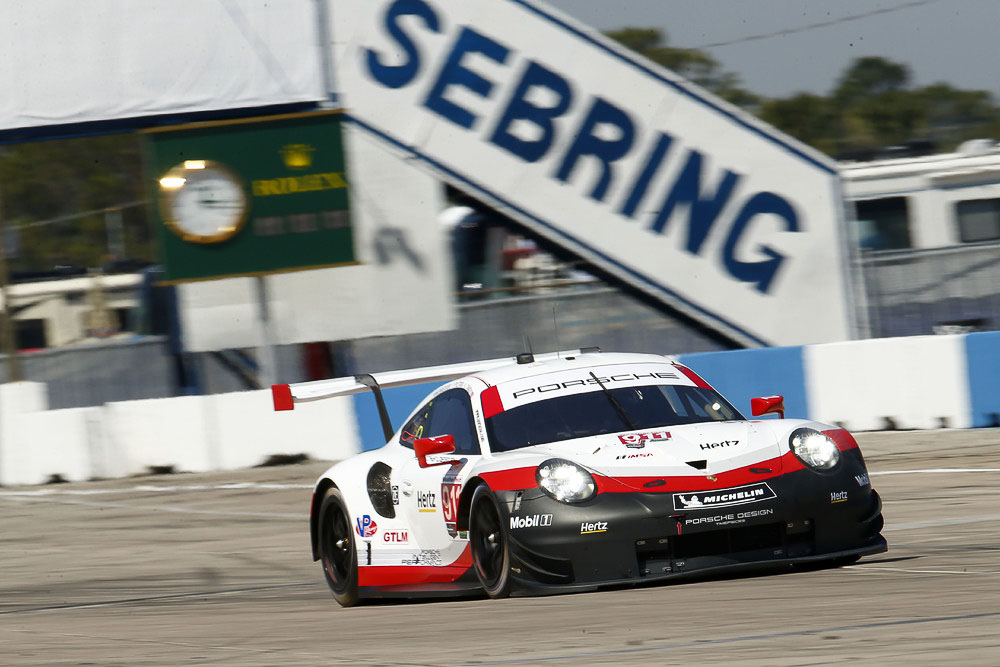 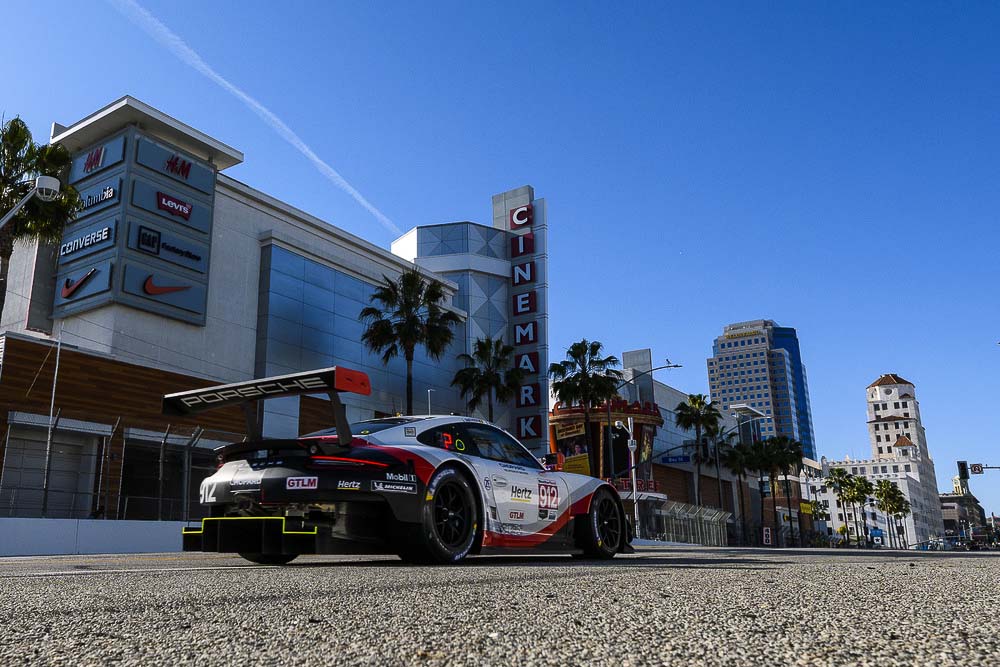 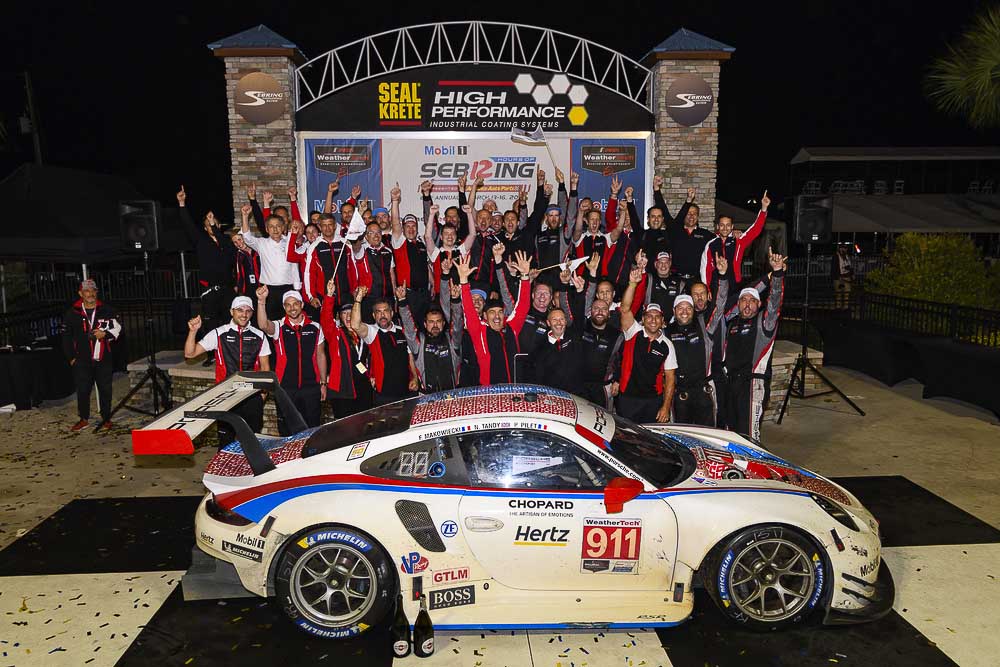 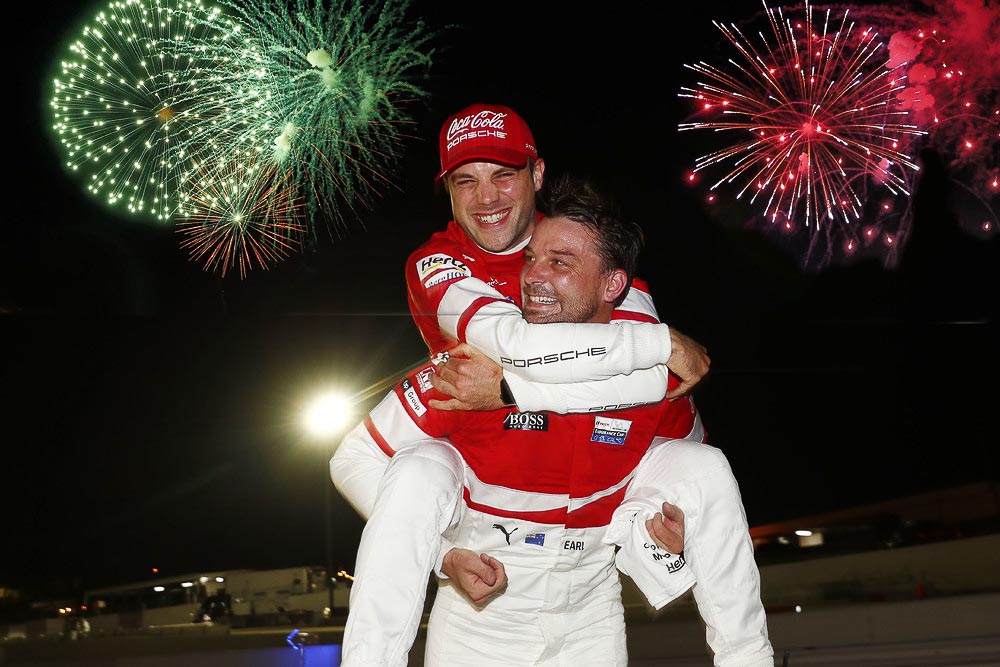 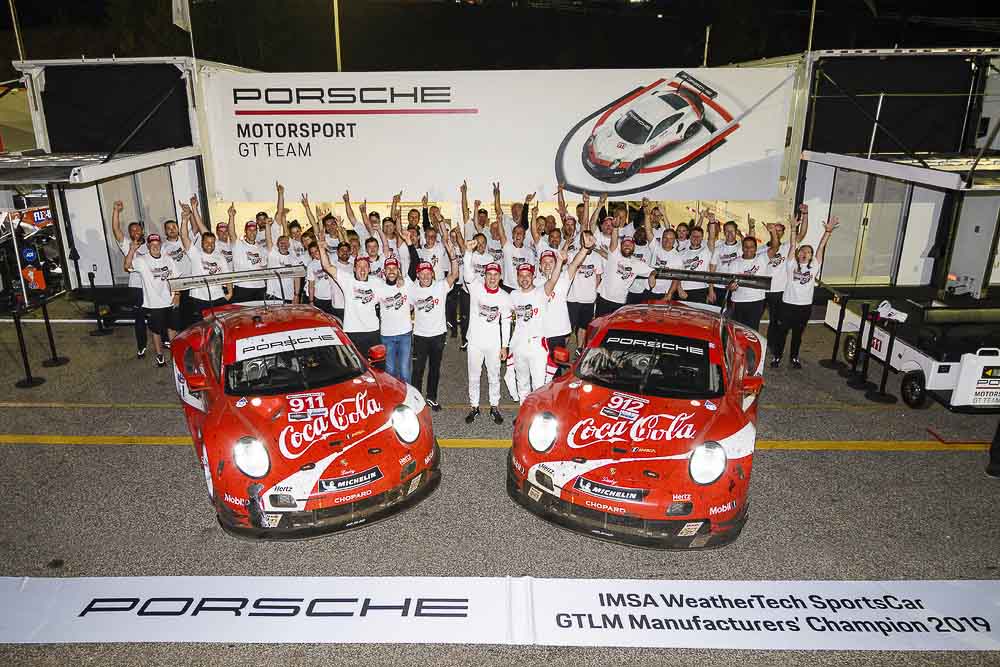 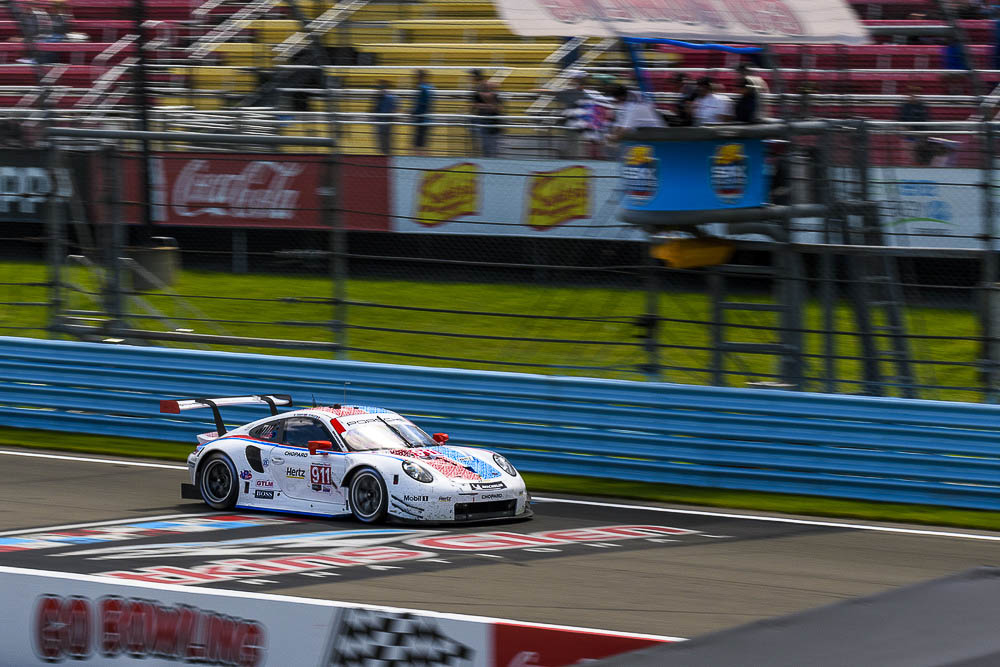 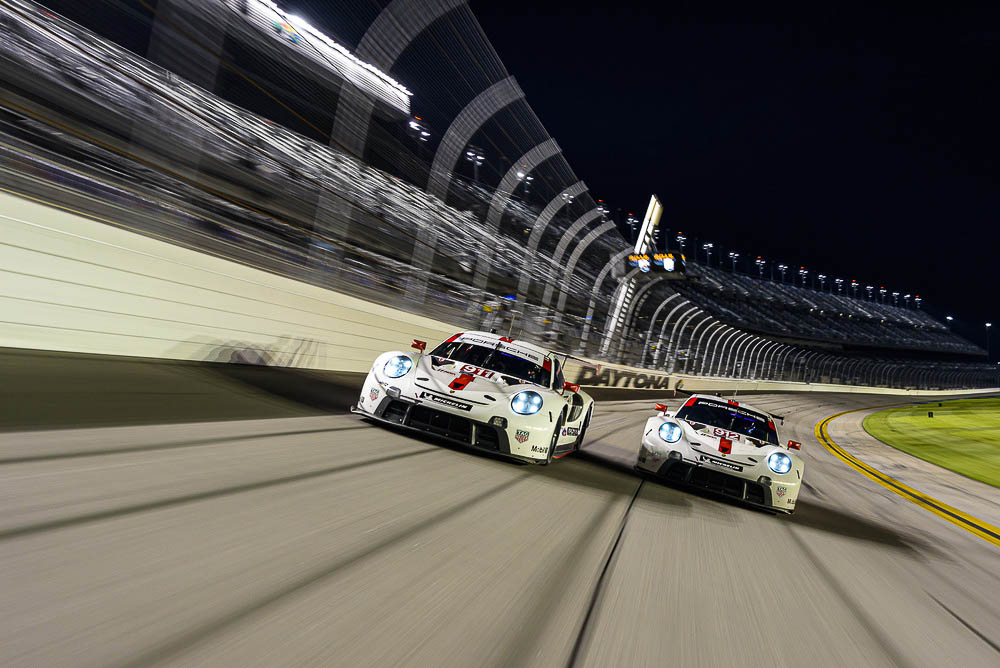 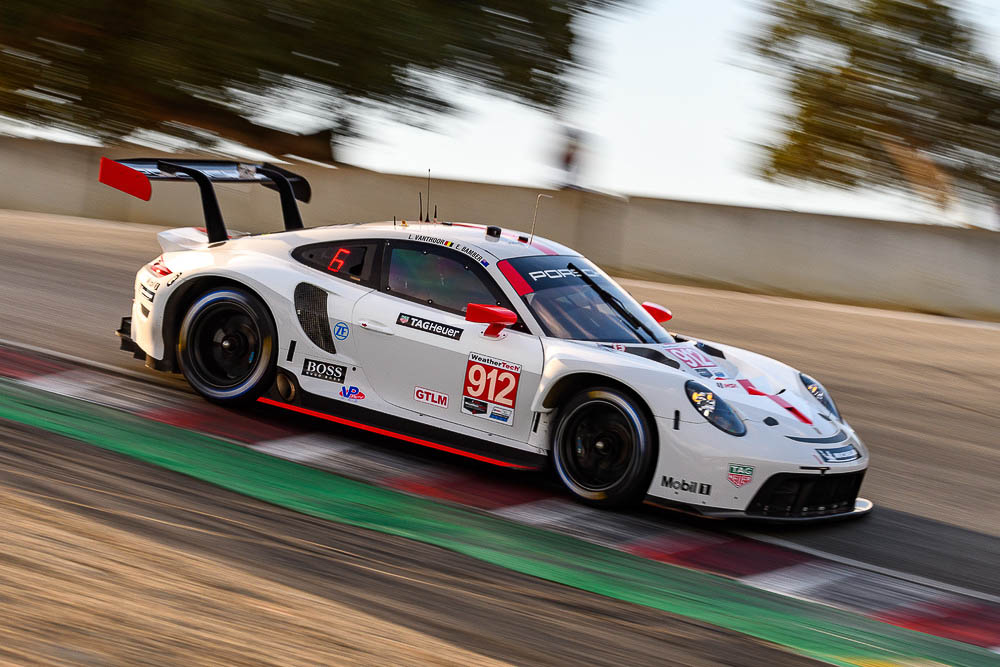 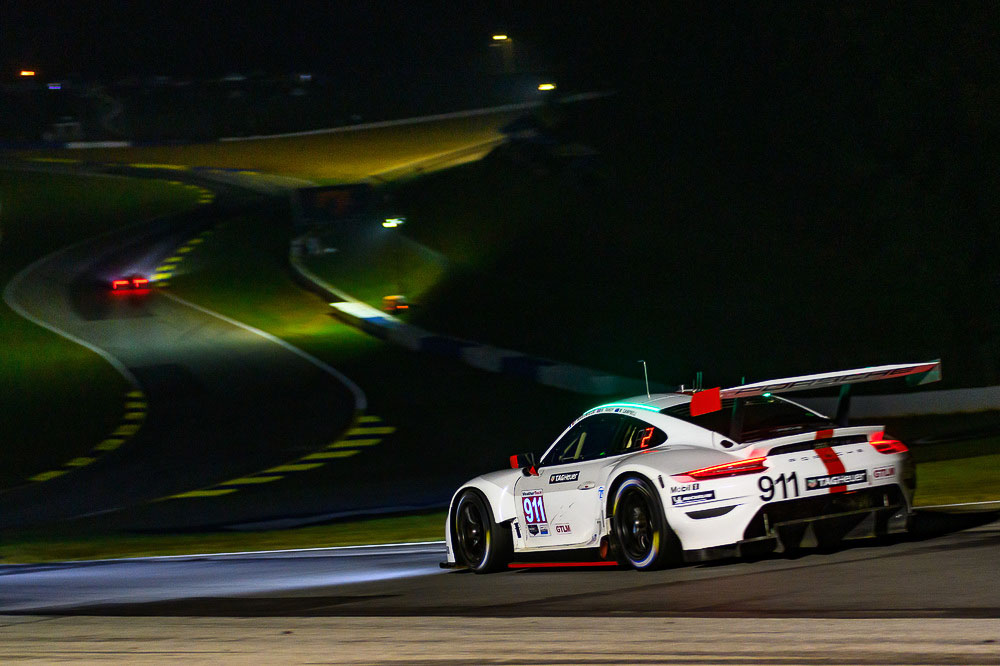 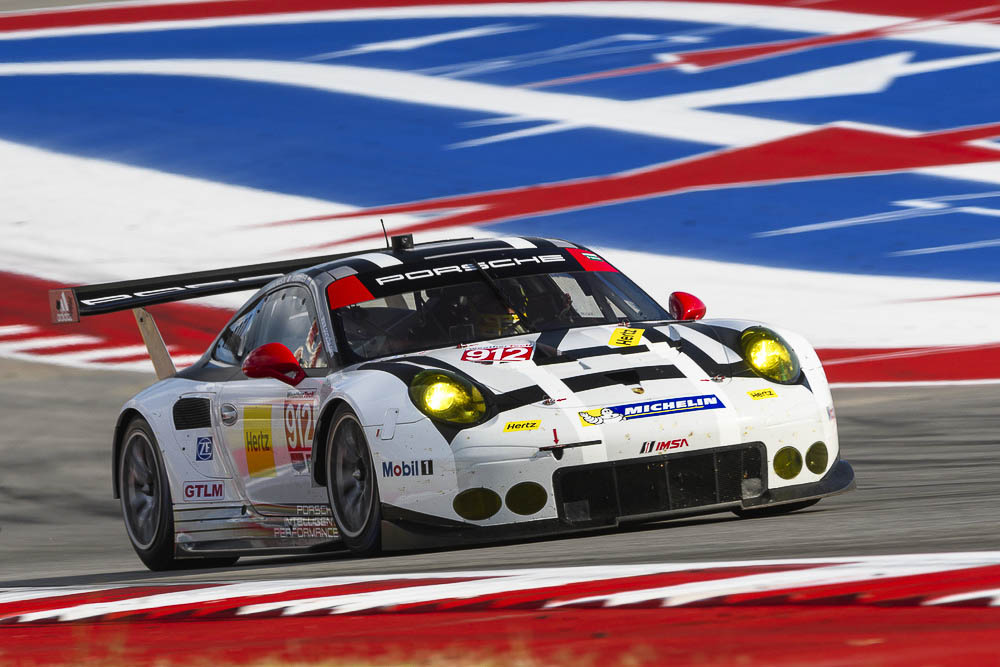 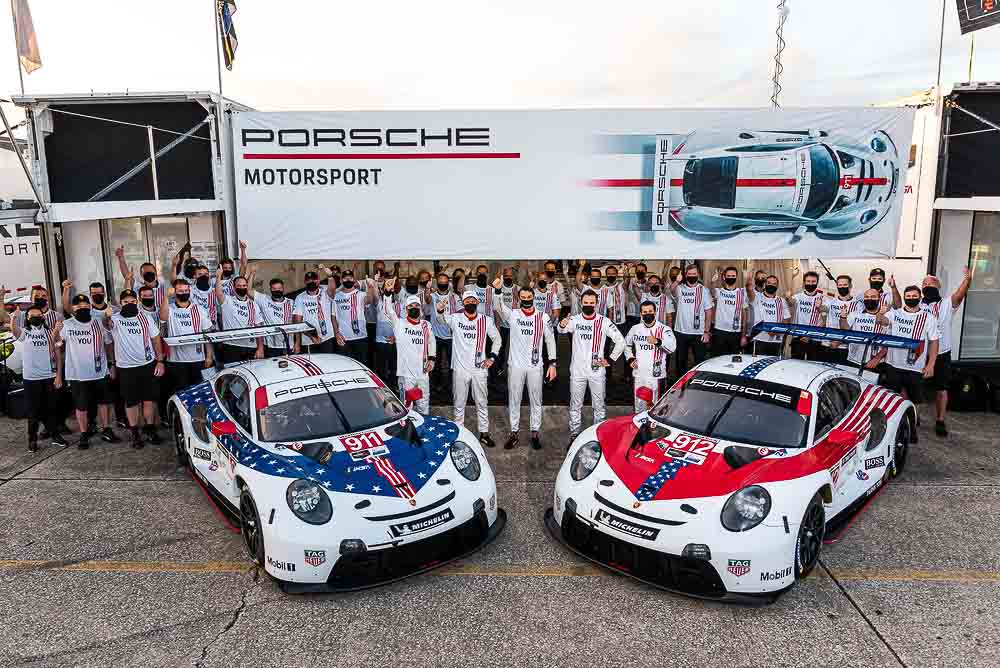 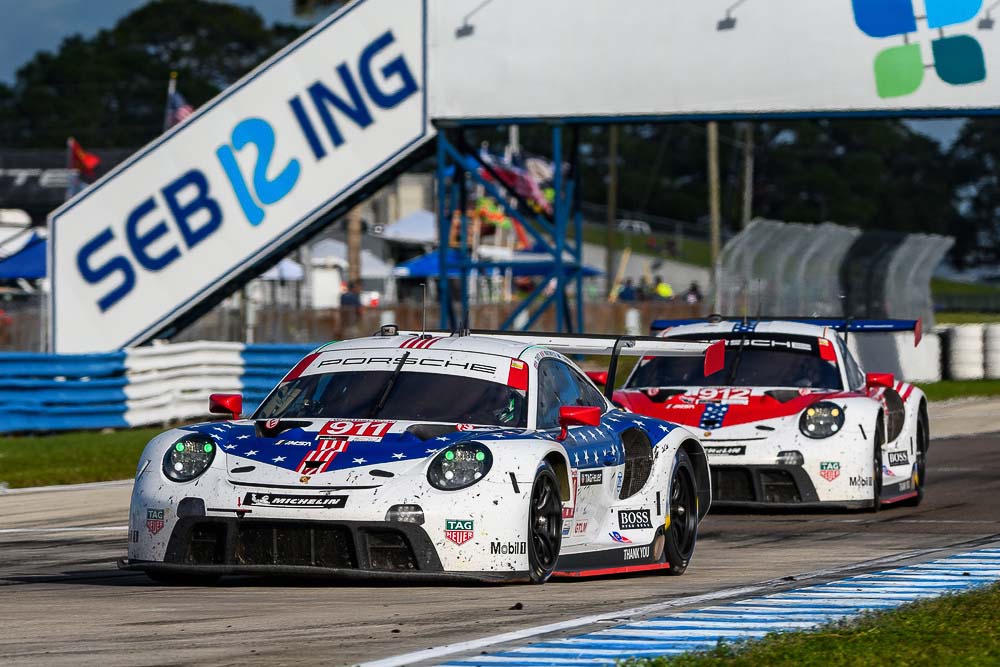 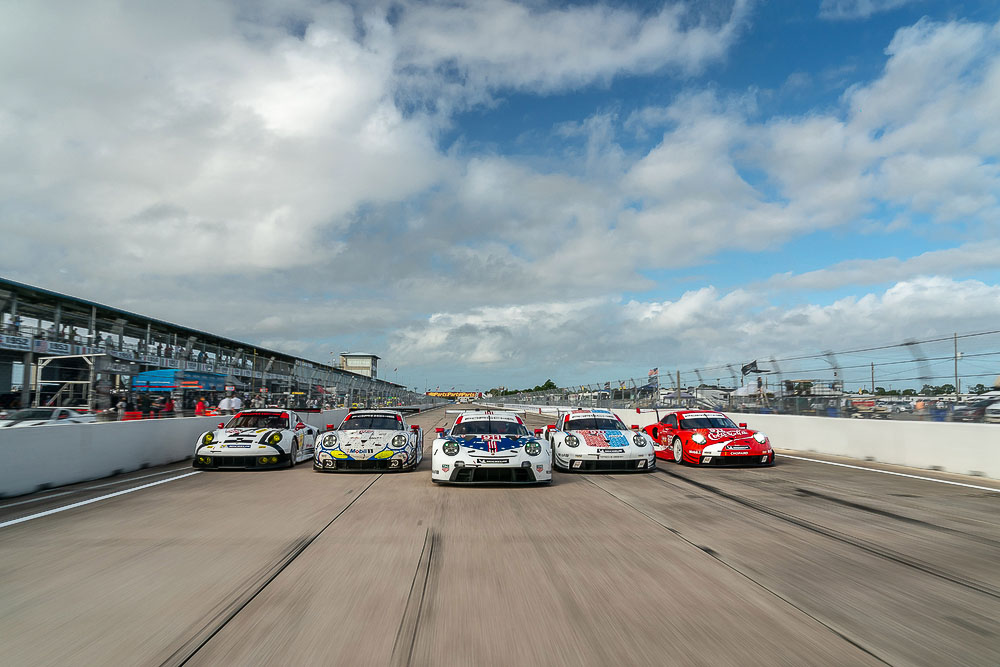 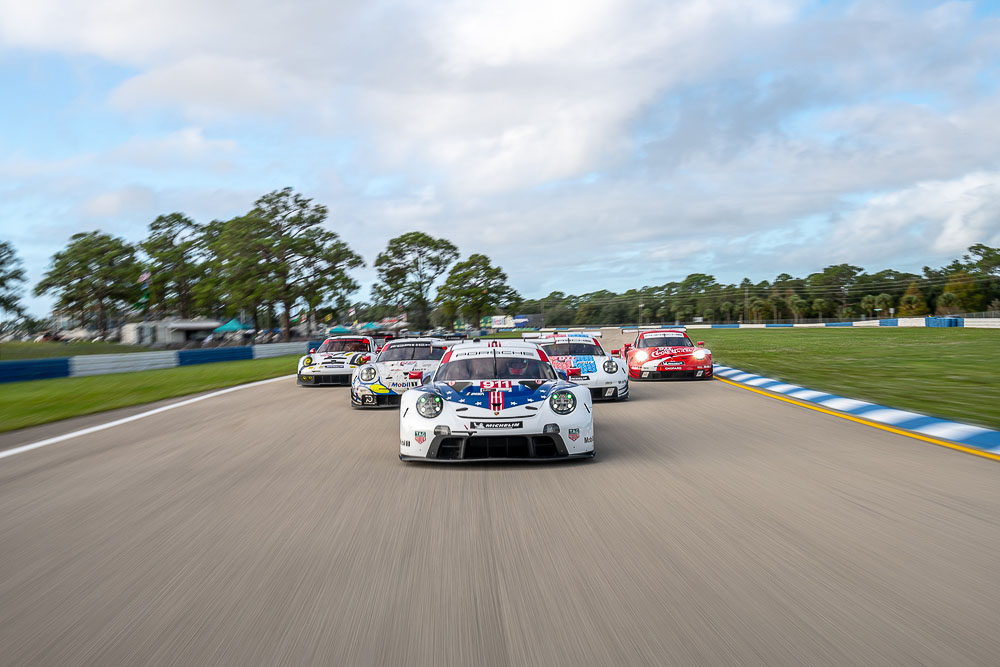