Jacky Ickx, (born January 1, 1945) in Brussels is a Belgian racing driver known for his success in Formula One and the 24 hours of Le Mans.He is the father of Vanina Ickx who is also a racing driver.

Jacky Ickx began his Formula One career at the Nurburgring in 1967, where he drove a Matra F2 car. Despite the disadvantage of driving a slower F2 car, only two F1 drivers qualified in front of him: Denny Hulme and Jim Clark. He was forced by the regulations to start behind the entire F1 field; nevertheless after 4 laps he was already 5th, overtaking 12 full-blown F1 cars. Unfortunately his front suspension broke and he was forced to retire after 12 laps. Despite his retirement he made a strong impression on the F1 team managers.

At Monza he made his official F1 debut in a Cooper-Maserati, finishing 6th. In 1968 Ickx drove a Formula 1 car for Ferrari. He retired from his first two races, but at his home race at Spa-Francorchamps he started from the front row and finished 3rd. At the French Grand Prix at Rouen he took his first win, in the pouring rain! Ickx also finished third at Brands Hatch and fourth at the Nurnburgring. At Monza he finished the race in third position, after driving almost the entire race without his helmet visor. In Canada his luck left him when he crashed and broke his left leg, which meant he could not compete for the remainder of the season.

In 1969 Ickx drove for the Brabham team, which was focussed around the owner and driver, Jack Brabham. His first results were poor, but when Brabham broke his foot, Ickx got use of the first car and his results immediately began to improve. Jacky finished third in France, second in England and won in Canada and Germany. In the Mexican Grand Prix Jacky finished second and became runner-up in the driver’s world championship. He then decided to leave Brabham to return to Ferrari because he had become too good a driver to be the second man.

As in 1969, he had a weak start to the 1970 season. During the Spanish Grand Prix he had a crash and his car caught fire. He only managed to escape from the car after 20 seconds and he ended up in hospital with severe burns. After 17 days he was already back in his car at the Monaco Grand Prix, but his Ferrari was no match for the Lotus of Jochen Rindt. The car started to improve and at the German Grand Prix at Hockenheim he fought with Rindt for the win, but finished second in the end. At the Austrian Grand Prix it was Ickx that took the win. In Monza fate struck and Rindt lost his life during free practice. All of a sudden Ickx was the only driver able to take the championship from Rindt. Ickx took the win at Canada but during the next GP he only finished fourth, which was insufficient to take the title from Rindt.Maybe for the better, because there’s not much honour in taking the title from a driver who has passed away. The GP of Mexico was again for Jacky.

In 1971 Ickx and Ferrari started as favorites, but the championship went to the other Jacky, Stewart with Tyrrell. This is due to the fact that Ferrari started the season with its full attention on the prototype-championship, and only halfway through the season it turned its attention to the F1 championship. Ickx was able to win the GP at Zandvoort, but after that he had a lot of retirements, while Stewart took one win after the other. The Scot and Belgian not only fought on the track that season, but also off the track. Stewart was constantly fighting for more safety in F1, while Ickx thought by doing that you took the challenge out of F1.

In 1972 Ickx stayed at Ferrari and finished 2nd in Spain and Monaco. After that the Ferrari only got noticed for its retirements. At the Nurnburgring Ickx was eager to show it was his track and gave his great rival Stewart no chance at all.

In 1973 the Ferrari 312B3 was not competitive and Ickx only managed one 4th place during the opening GP of the season. Halfway trough the season Jacky left the Scuderia in a fight. He raced the next GP in a McLaren and got 3rd place.

When Jacky signed with Team Lotus in 1974, a difficult period awaited him. Lotus had problems replacing the successful Lotus 72 and Ickx only managed a 3rd place in Brazil. After the Brazilian GP it went downwards with the results of the Lotus-Ford.

1975 was even more disastrous and Ickx left the team halfway through the season, even though he managed a 2nd place in the chaotic GP of Spain. It seemed like the end of his career was near.

In 1976 Ickx signed at Wolf and later at Ensign. Jacky decided to concentrate fully on the long distance races (where he had been very successful) and rallying. Only now and then did he race a GP. In 1979 he ended his career as a GP driver at Ligier, but still continued to win a lot of races in various sportscar series. Known as “Monsieur Le Mans” he won a record 6 times at the 24h race at Le Mans, became champion of CAN-AM in 1979, two times world-champion of endurance in 1982 and 1983, and won the Rally Paris-Dakar in 1983. To this date he holds the most complete palmares in car racing history.

In 1969 Jacky Ickx raced in the 24 hours of Le Mans for the first time. This race also saw the first appearance of the Porsche 917 in Le Mans, the 917 appeared by far as the favorite. The Ford GT-40 that Ickx drove with Jackie Oliver appeared at that time as an obsolete car, outperformed by the new Porsche 917 but also by the older Porsche 908 and the Ferrari, Matra and Alfa-Romeo.

Ickx was opposed to the traditional Le Mans start which he considered to be dangerous. Instead of running across the track to his machine, he slowly walked, then entered in his car and locked the safety belt. Thus he was the last to start his engine.

Soon a tragical event proved that Ickx was right: John Woolfe had a fatal accident with his private 917. He had not taken time to belt himself in.<p>

During the race the Porsche 917 proved unreliable, and none were to finish. The last four hours of the race turned into a duel between the Porsche 908 of Hermann/Larrouse and the Ford GT-40 of Ickx/Oliver. In the last hour, Ickx and Hermann continuously leapfrogged eachother. Ickx won the race by the smallest of margins, with less than 120 yards between the two cars.

Jacky Ickx won the Paris-Dakar rally in 1984, teaming up with Claude Brasseur in a Mercedes G. One year later, the duo takes another start but this time in a Porsche 959. Unfortunately, mechanical issues make them abandon the race. In 1986, the Rothmans Porsche Team gives it another try. This time they have more success. Rene Metge / Dominique Lemoyne win the race, and Jacky Ickx / Claude Brasseur finish 2nd. 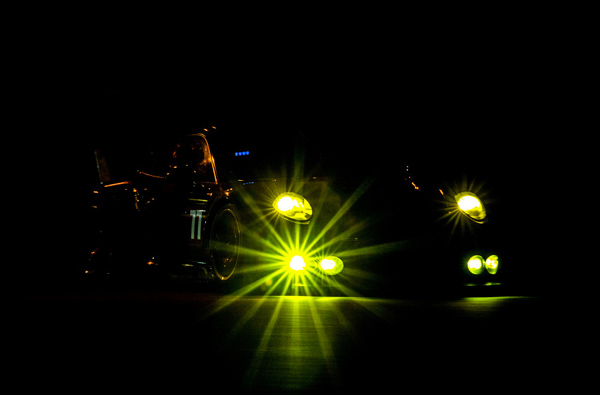